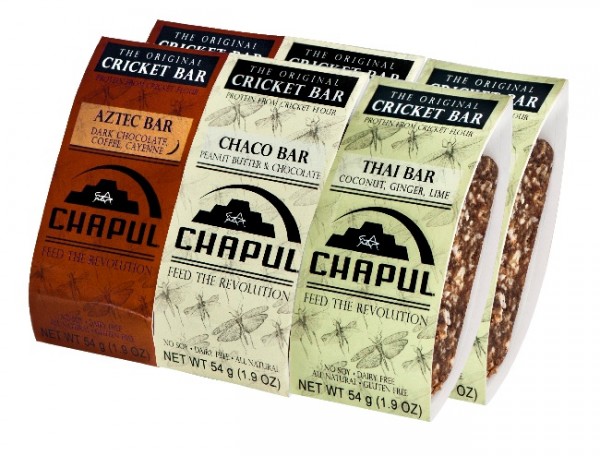 According to the United Nations Food and Agriculture Organization (FAO), global consumption of meat and dairy products will increase by 102% and 82% respectively between 2000 and 2050. This increased consumption is due to the world’s population rising to 9 billion by 2050 and as developing countries continue to increase their meat consumption as per capita incomes rise.

To accommodate 9 billion people, current food production will need to nearly double.  Our oceans are over fished and climate change and water shortages could have profound implications for food production. 9 billion people alone forces an increased food output from available agro-ecosystems resulting in even greater pressure on the environment. Shortages of agricultural land, water, forest and biodiversity resources, as well as nutrients and non-renewable energy are expected. But there is also  an increasing number of pets to feed.

The Humanization of Pets Adds More Pressure on Food Supply

Pets are considered, by the majority of pet owners, as part of the family. Pet owners are now thought of as pet parents who want to feed their pets food products similar to the food products that they feed themselves. When choosing protein sources for their pets, this translates into “human grade” meats, poultry or fish and the rejection of any ingredients considered to be of lesser quality such as meat or poultry by-products or meals.  As expected, pet food manufacturers are responding to the consumer demands.

This new marketing strategy from pet food manufacturers to formulate products with label claims as “high  protein”, “fresh meat” and “no by-products,” has perhaps further disoriented consumers about their pets nutrition needs and led them to believe that perfectly healthy and nutritious ingredients like organ meats, which are by-products, are bad for their pet.  The use of the marketing term “human grade” has led consumers to think their pet’s food should be the same or at the least similar to those found in their own food.

Current Protein Sources Are Not Sustainable

Today there are an estimated 1 billion chronically hungry people worldwide.  What we will eat and how we will produce food needs to be re-evaluated. We need to find new ways of growing food. 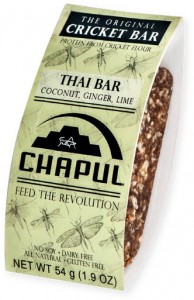 It is estimated that insects form part of the traditional diets of  at least 2 billion people. Insects are a highly nutritious and healthy food source with high fat, protein, vitamin, fiber and mineral content.

Insects have a high food conversion rate.  This means that crickets need six times less feed than cattle, four times less than sheep, and twice less than pigs and broiler chickens to produce the same amount of protein.  They emit less greenhouse gases and ammonia than conventional livestock. Insects can be grown on organic waste. Therefore, insects are a potential source for conventional production (mini-livestock) of protein, either for direct human consumption, or indirectly in recomposed foods (with extracted protein from insects); and as a protein source into feedstock mixtures.*1

Learning to accept insects as food requires overcoming negative attitudes toward insects in general.  Exposure and introduction to entomophagy (eating insects) can help reduce the surprise and novelty of seeing insects on a plate. Zoos, museums and universities will play an important role but perhaps well known chefs and other culinary experts will help lead the way by presenting insects as food that can be tasted and eventually  accepted and enjoyed. Education is  key for creating awareness of the potential roles of insects and in influencing consumer choices towards a more favorable outlook on insects as food.*2

Chapul’s bars are the first insect-based protein products in the United States.  The first step toward broadening our palettes and bringing American cuisine in line with 80% of the global population which regularly eats insects as part of a healthy diet.  I wondered if our The Tiniest Tiger community is ready to accept 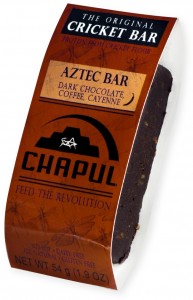 the challenge to try this alternative source of protein.
To learn more about Chapul, visit chapul.com

Enter to win 3  Chapul, The Original Cricket Bar. One Chaco, one Thai and one Aztec bar.

To Enter:
Enter your information in the contest widget so we know where to ship your prize if you win. Tell us in a comment below this post if you would eat a protein bar made from cricket flour and if you worry about feeding the world’s growing population.

Because this is a food item, this contest is open to friends living in the USA.  Sorry about that.