Thank you to Helen Woodward Animal Center for sharing this wonderful story of pet adoption from their Most Heartwarming Story Contest . It was submitted by Greenbrier Humane Society, an Iams Home 4 the Holidays participating organization, in 2008. 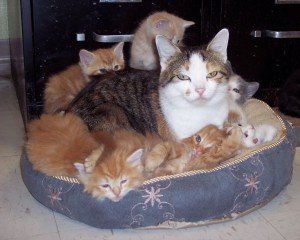 Mercy and her kittens

Mercy was brought to us because she was very pregnant. Her owners had too many pets and couldn’t take on another litter of kittens, so they decided to surrender her.  The Humane Society, being the bleeding hearts that we are, scooped her up from her cage in the Euthanization Room and proposed she and her kittens have a second chance at life.  We gave her the name Mercy because she was spared her life.  We took mercy on her when no one else would.

Mercy made herself right at home in the office, but she kept putting off giving birth until she was completely comfortable and had mapped out a particular location.  In the wee hours of the morning on September 11, 2008, Mercy gave birth to seven slick little kittens in- of all places- the litter box.  We had introduced her to a nice blanket-lined box in the nook under the back desk, and she humored us, but ultimately deemed the litter box to be a safer option.  Struck with the significance of this little miracle, we immediately decided to name the kittens after the brave men and women that gave their lives that fateful day.  There are five females and two males- seven kittens to commemorate the seventh anniversary of the day that America came together.

Some of our kitties’ namesakes were found, others have not been recovered.  But they all will live on in the souls of these little miracles born to us here at the Greenbrier Humane Society.  Some have already opened their eyes- a testament to the sanctity of life and America’s resolve.

Iams Home 4 the Holidays is an annual pet-adoption campaign dedicated to helping place orphaned pets into happy, loving homes. Started in 1999 by Helen Woodward Animal Center (in partnership with Iams) this is the campaign’s 14th year. Working with thousands of participating shelters and rescue organizations from around the world, the campaign has helped more than 7 million pets find loving homes. The pet adoption drive began on October 1 and runs through January 2, 2013.