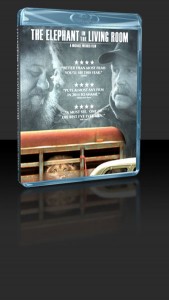 The Elephant in the Living Room will take you on a journey into the depths of the controversial American subculture of raising and selling some of the worlds more dangerous animals, as household pets. The critically acclaimed documentary  by  Michael Webber, an award winning director, follows the lives of two men caught up in the  middle of the issue,  Tim Harrison, an Ohio police officer whose friend was killed by an exotic pet and Terry Brumfield, a big-hearted guy who struggles,  self-sacrificing his own needs to raise two pet African lions that he loves like his own family.

At the beginning of the film, you might have the tendency to think the worst of Terry for keeping Lambert and Lacey, two grown African lions in his back yard. But as the film progresses, you will begin to understand the complexity of the situation as you ride the emotional roller coaster with Terry about what is best for the lions, for him and  for the rest of his family.

Terry was injured in an accident and recovering from back and neck surgery when a friend brought an African lion cub to visit him for a couple of days. The well meaning friend thought the cute cub would help Terry in his battle with depression post surgery and during his painful recovery. The cub did help Terry ‘s depression but as the lion grew up into a 550 pound adult, other problems arise, including Lambert’s escape from the yard to a nearby Ohio highway where a 911 call is placed saying the lion was attacking cars on the road.

Sightings of exotic animals are being reported all over the United States with the  rise in the exotic pet trade. A chimpanzee runs loose through a Connecticut neighborhood, a Burmese python kills a child in Florida, a bear attacks and kills its caretaker in Cleveland. There are more tigers in Texas than in the wild in India. In 2005, there were more emergency calls for nuisance alligators in Ohio than some areas of Florida.  In most parts  of the United States, the law requires a dog license to keep a dachshund, but  nothing to keep a  tiger in your backyard, raise a chimpanzee in your home, or keep a Black Mamba as a pet.

The Elephant in the Living Room gives the viewer a sneak peek at the Mount Hope Exotic Animal Auction held in the middle of what appears to be  serene Amish country.  The blend of the heartland of Ohio mixed with the undercurrent and subculture of trading in exotic and dangerous animals gives the whole scene a rather spooky feeling.

You won’t walk away from the film untouched and you might feel emotionally spent after viewing. But I think this is  exactly what a documentary should do, leave the viewer pondering the issues.

Where do you find yourself in this tug of war?  Do you think there should be a ban on the selling, trading and private ownership of exotic pets, including big cats, bears, wolves, non-human primates, venomous snakes and crocodiles?

Let me know where you weigh in on the heart of this heated debate by commenting below.

One reader will be chosen to receive a copy of The Elephant in the Living Room on August  18, 2011.

I was given a copy of The Elephant in the Living Room by Edify Media. The film will be available on DVD & Blu-Ray August 23, 2011.