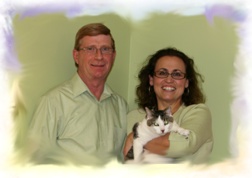 Paul, Gracey and Joanne in a photo we like to call Too Much Green! Photo by Patty Wycinski

A few years ago we were  fortunate enough to adopt an abandoned kitten from the local dog pound. We were looking for a friend’s dog that was missing and arrived at the dog pound the same morning that someone had dumped a small kitten at the pound. The dog warden at the time didn’t have the heart to leave the kitten out in the snow and cold so he placed her inside  in a cage.  The kitten was so tiny, she fit into the palm of my hand and was not yet weaned.  She looked almost exactly like my friend Ed’s beloved cat Hazel.  We decided that we could not leave the kitten there, so I picked her up, nestled her beneath my winter coat and home she came.

My first action was to get the kitten cleaned up.  She was filthy.  She even had mud impacted in her nose!  I gently washed the kitten in my bathroom sink.  I tried to get the mud out of her little nose but that mud was stubborn.  It took a little while for me to realize, that what remained was the stain on her pink nose.  Those little eyes were looking at me as though to say, I am so relieved that you brought me home from sleeping on the cold cement floor at the dog pound, but could you take it easy on my nose?   For fear that she would get too cold, I then got out my hair dryer, and with the diffuser on low, I dried her.  Her fur was so soft that she fluffed up like an Easter chick.

Next…what to feed her.  My friend Evelyn knew a lot more about cats than me.  I was fortunate to run into her at the Kroger store where we both used to work.  I told Evelyn my dilemma and she told me to feed the kitten baby oatmeal and goat’s milk warmed up, several time a day.  Evelyn told me if I did this that the kitten would just thrive!  Armed with goat’s milk, baby oatmeal and kitty litter, I was now ready to be a  cat parent.

Ed thought Gracey was a fine name and we agreed.  I set up her litter pan and began to prepare her first meal. Evenlyn was right, little Gracey began to thrive.  She was an active and happy kitten.  That afternoon, I watched little Gracey curled up sleeping where the sun was shining on a chair.  I said to her, ” You are the tiniest tiger, what am I going to do with you?” She peaked out of one eye and went back to sleep.  I was smitten.  She was a lucky little kitten, but I too was lucky to find her.

Over the years together, I would look at Gracey and wonder what kind of cat she might be.  I was reading through a book entitled CATS by Yann Arthus-Bertrand and I thought that Gracey might possibly be part Eqyptian Mau. Gracey has similar eyes and eyeliner and a stain on her pink nose.  Gracey often places her left paw on my hand or arm while sleeping as well.  Then I began to think about the big cats and the similarities with their small domesticated cousins.  One thought led to another, and the story of The Tiniest Tiger unfolded. 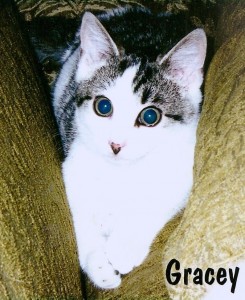