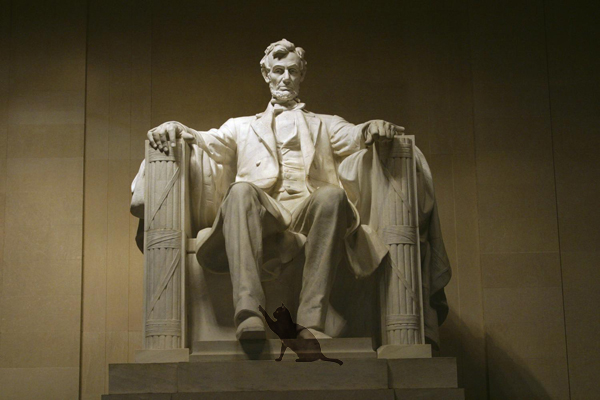 Today is Presidents Day, a United States holiday celebrated on the third Monday of February to remember all presidents, but most might associate with Presidents Washington and Lincoln. Both Presidents were born in February, Washington on the 22nd and Lincoln on the 12th.

While we pay tribute to all Presidents, one former leader stands out not only for his Presidency, but for his love of all animals, perhaps first and foremost, his cats.

President Lincoln and His Cats

Lincoln was given an unexpected gift of two kittens from William Seward, then Secretary of State. The President pampered his cats, Tabby and Dixie. It is told that he once fed Tabby from the table during a formal dinner at the White House.  Later when  the president’s wife Mary expressed her concern and embarrassment to her husband about feeding Tabby from the table in front of their guests, it is told the president stated, “If the gold fork was good enough for former President Buchanan, I think it is good enough for Tabby.”

Caleb Carman, Lincoln’s friend, told how the president would talk to his cats for half an hour at a time. During his term, Lincoln remarked, “Dixie is smarter than my whole cabinet! And furthermore she doesn’t talk back!”

Lincoln’s love for cats was not limited to Tabby and Dixie.  He was known to bring home stray cats from time to time. It is reported that Lincoln was distracted by the sound of crying kittens at the Ulysses S. Grant headquarters in Virginia during the siege of Petersburg in March of 1864. Admiral David Porter wrote he was touched by the sight of the president “tenderly caressing three stray kittens.  It well illustrated the kindness of the man’s disposition and showed the childlike simplicity which was mingled with the grandeur of his nature.”

Porter remembered Lincoln petting the cats and quietly telling them, “Kitties, thank God you are cats, and can’t understand this terrible strife that is going on.”

Before he left the officers’ tent, the president addressed a colonel and said, ” I hope you will see that these poor little motherless waifs are given plenty of milk and treated kindly.”

Thinking about President Lincoln today, I found this old image I must have made from a President’s Day in the past.   I always liked visiting the Lincoln Memorial and that was before I knew about the president’s love of all animals.  Now, I have grown even fonder of the man and the Memorial.

I care not for a man’s religion whose dog and cat are not the better for it. – Abraham Lincoln

I am in favor of animal rights as well as human rights. That is the way of a whole human being. – Abraham Lincoln