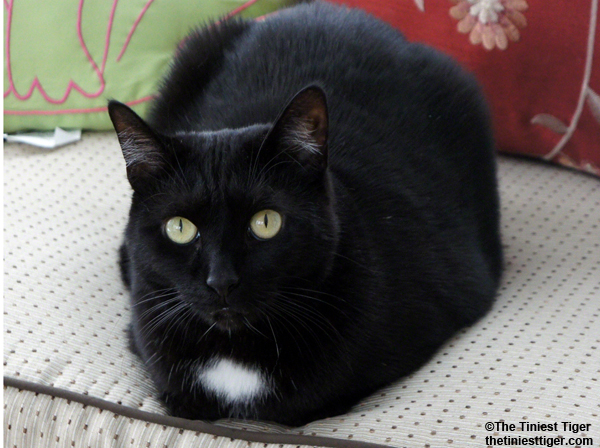 Mercy’s Story as Told by Gracey

In an earlier post for Black Cat Appreciation Day,  Gracey told how Mercy came into our lives.  I wanted to share her story with you here.

“There was an alley that ran behind the building where we used to live, and in this alley lived a feral colony of cats.  These cats were taken care of by us and a few of our neighbors.  We would feed the cats every day and if we were late, they would come up and knock on the door to remind us.

Not all of our neighbors liked the alley cats.  There was one lady in particular that was super mean.  One day she even had the Mayor trapped in the alley telling her that the cats were ruining her flowers. Now you might think that could be possible, cats will be cats,  but I must tell you that she planted plastic flowers along her walkway.  I am not making this up, she really did.  So you can imagine the look on the Mayor’s face as she listened to the woman’s complaint. Well things got a little tense between Cruella de Vil, I mean our neighbor and she yowled loud enough that eventually the city said there would be no more feeding of the alley cats by anyone.

Well, you are probably thinking that this didn’t stop my parents or the other normal neighbors, and you would be right.  They just had to be a little more stealthy in their maneuvers.  Sometime during this clandestine feeding schedule, Mercy was born.  He was just a tiny little kitten when he first popped up by the feeding rock. This was a rock that was hidden from the view of the mean neighbor.  My dad was smitten by Mercy.  He said that Mercy would jump up on top of the rock and shake his back end from side to side to keep the other cats that were two to three times the size of him off the rock until he got his share of the food. My dad couldn’t stand the thought of little Mercy  fending for himself in the alley. 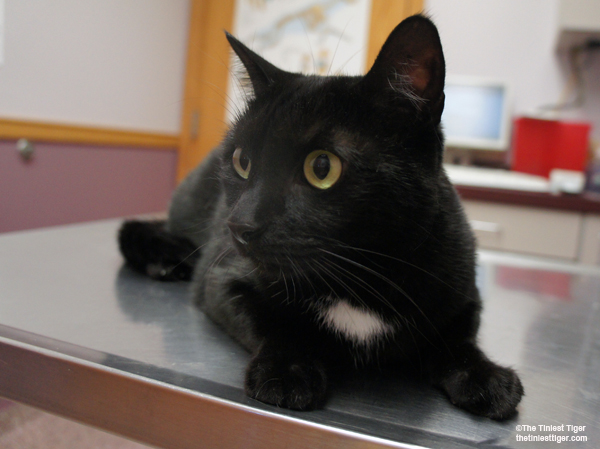 Mercy at the Morris Veterinary Clinic

My parents worked with one of the nice neighbors and we were able to catch him, get him cleaned up and off to visit he doctors at the Morris Veterinary Clinic.  Mercy was a healthy kitten and Dr. G even said that if we didn’t want to keep him that he would take him because he could already tell that Mercy was super smart and was going to be a great cat with a sweet personality.  And Dr. G was right!”

Mercy spent most of his time with Paul’s mom.  Late last year, Mercy came to live with us while Paul’s mom recovered from a fall injury.  Mercy made the adjustment from being the only cat to sharing our home with Annie and Eddie remarkably well.  I am sure it helps that Paul’s mom is here with him too.

9 Little Things We Love About Mercy

1) Mercy takes a nap on Paul’s mom’s lap    Paul’s mom is not very big, but that doesn’t stop her from letting Mercy curl up on her lap and take an afternoon nap.  He is almost as big as she is and when we see them napping together with her arms wrapped around him and his head on her chest, we just melt.  It is so sweet it can bring a tear to your eye.

2) His velvet nose and 3 Diamond Pattern.  Mercy has the most beautiful black velvety nose.  Just gorgeous.  And he has three patches of white fur in a diamond shape on his chest and belly. 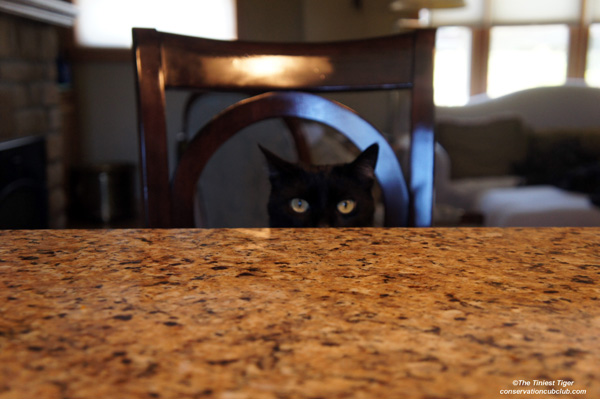 Mercy on his stool at the counter

3) Mercy’s place at the counter  We have two stools at our counter.  When Paul’s mom is on one, Mercy is on the other. 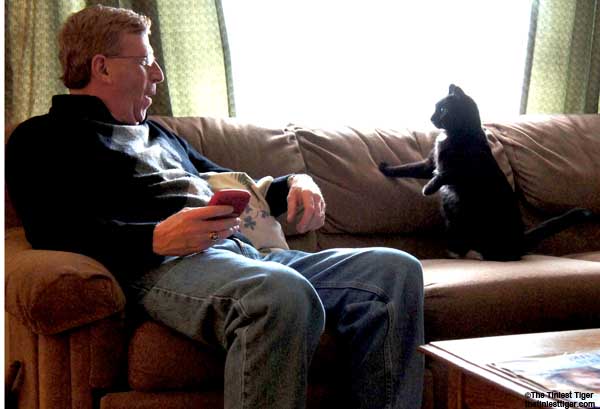 4) Mercy really loves Paul.  He has never forgiven me for being the one to give him his medicine a couple years ago.  When Mercy has a problem. He tells Paul all about it.

5) Mercy is a man of few words.  But when Paul leaves the house, Mercy sits at the door and cries.  Then after a while, he goes back to spend time with Paul’s mom. 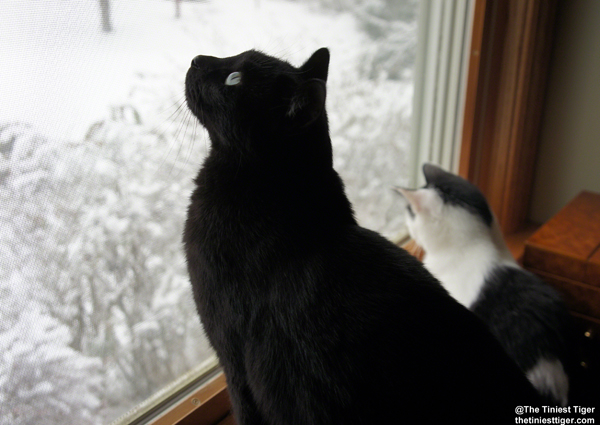 6) Birdwatching with Eddie.  The two boys watch sports together.  They sit side by side and watch the birds at the feeder. 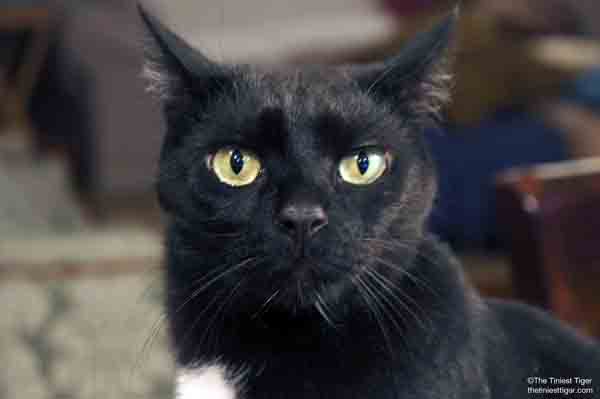 Kittens Today! They’ve got it made.

7) Mercy gets a 9 out of 10 for putting up with kitten shenanigans.  Although I am sure there are times he would like to be left alone, he joins in the kitten games  too. Especially the Kitten 500 race at night with Eddie.

8) His Name!   We named him Mercy because we already had Gracey.  We thought this was one way to be certain that Grace and Mercy would follow us all the days of our lives.  Now, when we say his  name, especially when he is starting to do something that he shouldn’t and we say, “No, Mercy!” it of course sounds like “No Mercy!” and it reminds us to be kinder and remember to show mercy.  We all need a little mercy in our lives now and then. 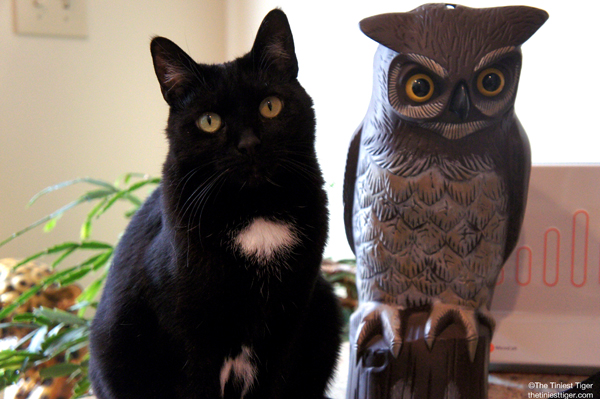 Mercy and the Office Owl

9) Mercy is good company too.  Mercy has brought so much joy into Paul’s mom’s life and ours too.  He is really her baby and the love they have for each other is evident.  He has adjusted perfectly into our house and even though there is the occasional tussle with Annie, nothing serious or of concern.  Mercy, just like Gracey is obsessed with the office cactus.  He tries to sneak over and give it a chomp and more often than not, when I turn around to look at him, I see him sitting innocently beside the Office Owl.  He doesn’t know I can see him in the reflection in my monitor and it makes me smile.

I hope this helped you to get to know Mercy a little better.  Thank you for reading.