We are celebrating with my brother Mercy today.  He is a beautiful sleek and shiny boy with three white diamond 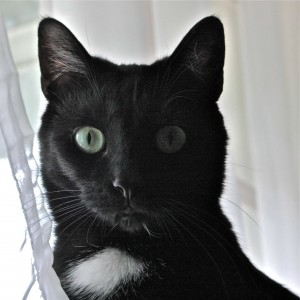 patches at his chest and on his underside.  He has big  green eyes and a black nose.  Mercy is super sweet, he really is. I think we look alike around the eyes don’t you?

In honor of my brother,  I decided to tell you how Mercy came to be adopted into our family.

Before we moved into our current habitat, we lived in another  habitat, that was a loft style apartment.  There was an alley that ran behind our building, and in this alley lives a feral colony of cats.  Now these cats were taken care of by a few of our neighbors and my parents.  We would feed the cats every day and if we were late, they would come up and knock on the door to remind us.

Not all of our neighbors liked the alley cats.  There was one lady in particular that was super mean.  One day she even had the Mayor trapped in the alley telling her that the cats were ruining her flowers. Now you might think that could be possible, cats will be cats,  but I must tell you that she planted plastic flowers along her walkway.  I am not making this up, she really did.  So you can imagine the look on the Mayor’s face as she listened to the woman’s complaint. Well things got a little tense between Cruella de Vil, I mean our neighbor and she yowled loud enough that eventually the city said there would be no more feeding of the alley cats by anyone.

Well, you are probably thinking that this didn’t stop my parents or the other normal neighbors, and you would be right.  They just had to be a little more stealthy in their maneuvers.  Sometime during this clandestine feeding schedule, Mercy was born.  He was just a tiny little kitten when he first popped up by the feeding rock. This was a rock that was hidden from the view of the mean neighbor.  My dad was smitten by Mercy.  He said that Mercy would jump up on top of the rock and shake his back end from side to side to keep the other cats that were two to three times the size of him off the rock until he got his share of the food. My dad couldn’t stand the thought of little Mercy  fending for himself in the alley.

My parents worked with one of the nice neighbors and we were able to catch him, get him cleaned up and off to visit

the doctors at the Morris Veterinary Clinic.  Mercy was a healthy kitten and Dr. G even said that if we didn’t want to keep him that he would take him because he could already tell that Mercy was super smart and was going to be a great cat with a sweet personality.  And Dr. G was right!

So I hope you will join me in celebrating Black Cat Appreciation Day!  You might not know that because of old superstitions, black cats are the least adopted of all cats.  Isn’t that super sad?

Be a cheerleader for black cats!

From now on every-time you get a chance to be a cheerleader for our black cat cousins, I hope you will speak out on their behalf.  Small paws united to make a big difference!