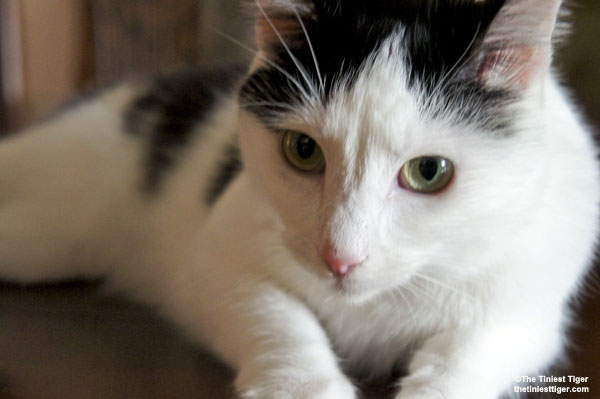 Cat  Purrs are Signals of Communication

In our house cats, many signals of communication with humans appear to originate from the time the kittens were dependent on their mother.  Purring in domestic cats is one of these signals, with kittens first being observed purring while nursing.  We typically associate purring as a sign of a happy, contented cat. But some cats also purr at feeding time when they are actively seeking food from their guardians.

House cats use many different tactics and signals to communicate with their humans. Sometimes if a cat feels a hunger pang and breakfast is not served, the cat might attempt to wake their parent. The cat might try  knocking items off  the night stand or leaping onto their beds.  Some cats try to wake their humans with intense staring or a tap of the paw.  If these efforts fail, the cat will turn to its secret weapon, the solicitation purr also known as the manipulative meow.

A recent study exposed  one of the house cats best kept secrets.  Cats are able to control their humans by making a subtle change in their purr,  exploiting the sensory biases of the humans that share their homes. Cats are able to embed a high frequency vocal component within their low frequency purr that triggers a sense of urgency in their humans.

This solicitation cry, embedded within the naturally low-pitched purr is dramatically emphasized by cats when they want food. The cat has figured out that this cry taps into an inherent mammalian sensitivity making the sound difficult to ignore.

The study carried out by the Centre for Mammal Vocal Communication Research in the Psychology Department at the University of Sussex in the United Kingdom showed that the domestic feline’s manipulated purr-cry occurs at the same frequencies, (300-600Hz) as a human infant’s cry. The cat does not go so far as to mimic the urgency of the cries of a distressed human infant but has adapted to vocalize so that their parent most likely will not just roll over and go back to sleep.

House cats have figured out how to bridge the inter-specific communication gap between feline and human. The cats have learned to take advantage of  basic nurturing instincts.  This enhances  the level of cooperation and care they receive from their pet parents. Subtle and clever manipulation.

Can You Differentiate Between Cat Purrs?

Previous Post: « Can You Inherit A Love For Animals? A Father’s Day Tribute
Next Post: The Cat’s Meow. The Evolution of the Manipulative Meow »