This is Thinking Gracey. When you see this image, you might want a "thinking beverage" and/or a nap.

Dogs and cats were evaluated in eleven categories in an attempt to determine which species is more intelligent.  I know, this is like trying to determine which is of greater value, a piece of limestone gravel or an emerald but try to control any hissing and fat tails.  The  New Scientist article’s shocking research results show a clear bias towards dogs  with the canines awarded 6 points and the felines a meager 5.

Dogs celebrating  the declaration that they are smarter than cats came a wee bit early in our opinion. And just like dancing in the end zone, this  display of excessive celebration usually results in a penalty. So, The Lazy Leopard Research Institute is about to blow the whistle and place a flag on the play.

While our canine compadres celebrated by fetching toys, speaking on demand,  and toasting with toilet water cocktails, their fellow felines were hard at work analyzing the data. Here is what the superior minds at The Lazy Leopard Research Institute* found out.

The average dog brain weighs in at 64 grams and the average domestic cat’s brain weighs 25 grams. This stands to reason as dogs on average are much heavier than the typical house cat.  What is more important than simply brain size, not a reliable measure of intelligence, is to take a look at the brains information processing capacity: the number of neurons in the cortex, known as the executive brain. Cats clearly rule with 300 million neurons compared with a mere 160 million in dogs.  We have created a chart to rub it in, we mean to make it easier to compare. 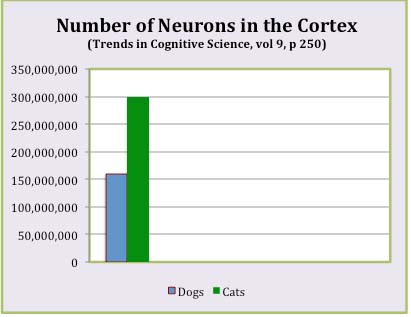 At this point, do we need to even go on?  We cats are not ones to kick a dog when it is down but in the interest of science we must follow through.

Ancient Egyptian burials and hieroglyphs tell us that cats were popular in homes from about 3,000 BC. However, comparisons of DNA of wildcats across the globe with that of house cats confirms their origins in the cradle of agriculture, the Fertile Crescent east of the Mediterranean. This is about the time we taught humans how to attract mice and other prey for easier hunting.

There is evidence of a 9500-year-old burial of a kitten with a human on Cyprus. That is all the human researchers have been able to piece together so far. Is that the feline’s fault?  And is shared history a true measure of intelligence?  We threw this category out due to human bias in favor of the dog.

Dogs put through the “strange situation” test responded the same way as a human baby. A secure baby and a dog is bold and happy while mom is around, becomes agitated when she leaves, will calm down with a stranger after a period of time but only has eyes for mom when she returns.

Adam Miklosi from Eotvos Lorand University in Budapest, Hungary, whose group did the “strange situation” test with the dogs tried this experiment with cats.  The cats found the lab setting upsetting, stressful and refused to take the test.

Cats were penalized for their independence, when evolution is truly to blame.  Cats are loners and independent thinkers, whereas dogs are babies.  We threw this category out due to human bias in favor of the dog.

Cats are the clear winners and even the human study agrees. In the top ten cat-owning countries there are nearly 204 million cats sharing homes with humans.  Dogs owned by humans as pets number fewer than 173 million in the top  10 dog-owning countries. See chart below. 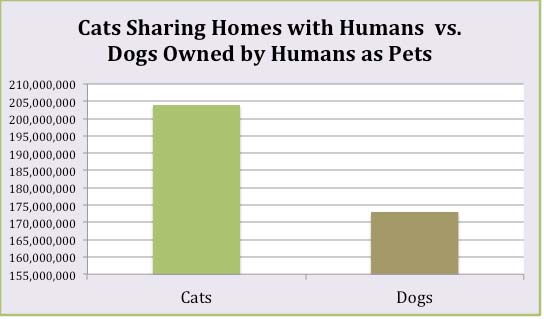 There you have it. Numbers don’t lie.

The human study claims that cats are cognitively similar to dogs, therefore an expected similarity in behavior patterns and abilities stands to reason. But, cats are not cooperative or motivated  to comply with the human studies so they are much harder to analyze.  Both cats and dogs are able to follow pointing gestures to find food, but when the hunt for the food is more complicated, either hidden or out of reach, dogs are most likely to ask for help from their pet parent while cats will try to figure out how to get their paws on the reward themselves.

The human study rewards the dogs for being cheaters.  We threw this category out due to its bias towards the cheating dogs.