This is Thinking Gracey. When you see this image, you might want a "thinking beverage" and/or a nap.

In Part 3 of our review of the New Scientist  article that concluded dogs are smarter than cats we will move on to evaluate the final three categories:  9) Supersenses, 10)Eco-Friendliness and 11) Utility.  In case you are new to our discussion, in Part 1 we reviewed: 1) Brains, 2) Shared History, 3) Bonding, 4)Popularity and 5)Understanding.  In Part 2 we reviewed: 6) Problem Solving, 7) Vocalisation and 8 ) Tractability.  The score:

Does it even seem fair to compare dogs and cats in this category? The very word SUPERSENSES screams cat doesn’t it?  Alas, here is what the humans had to say about the senses.

b) VISION The history as nocturnal hunters has left both species some impressive visual abilities.   Cats and dogs have a quicker “flicker-fusion rate” than humans, meaning the retinas take more snapshots of their world per second than human eyes. This gives both species superior sensitivity to movement.  For example, a tiger stalking may not be able to clearly see it’s prey while standing completely still,  but the smallest movement, even the blink of an eye is caught by the eye of the tiger. More rods than cones are the reason for this motion detection and also why both species have poorer color vision than humans. However, the rods enable the ability to see in low light levels and here the cats have the upper paw.  Cats can see light levels six times as low as a human while dogs can see around five times as low as a human. VISION GOES TO THE CATS!

c) HEARING The auditory range for the cat extends from 45 to 64,000 hertz as compared to that of dogs at between 67 to 45,000 hertz as shown in the chart below. HEARING GOES TO THE CATS! 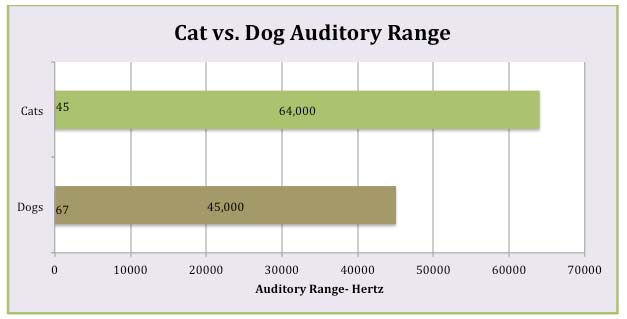 So, there you have the review of the supersenses  and it is a clean sweep for the felines.  Both the human study and The Lazy Leopard Research Institute agree. The humans awarded just one point to the cats even though the felines won all three of the supersenses compared.  We were tempted to award 3 additional points to the cats but rather than wolf down the points like our canine compadres might do, we decided to be good sports and just  take one point at a time.

Cats take the heat for killing wildlife but dogs are just as responsible. Canines play a role in the decline of the European nightjar, they disturb ground nesting birds, and even walking on their leads, they are reducing biodiversity.

For this study, cats and dogs were compared by their real difference in ecological impact in consumption, meaning the area of land required to keep them fed.  A medium-size dog’s ecological footprint is 0.84 hectares annually. Even the teeny tiny chihuahua has a footprint of 0.28 hectares per year.    The environmentally friendly feline’s average paw print is 0.15 hectares.  Proof that cats are earth-friendly and dogs not so much.

Even though this final category is completely bias in favor of the dog, we have decided to not throw it out so as to, well, throw the dogs a bone.  We cats are not ones to gloat and we don’t want to further damage the dog’s fragile ego in constant need for approval and positive reinforcement  by trouncing them 8+ to zip, zilch zero.

The human study gave the dogs a point because dogs serve them.  And we are not making light of the fact that some dogs are able to sniff out bombs, guide blind and deaf people and pull sleds.

A cat’s purr has been proven to reduce stress and owning a cat can lengthen a human’s life.  But because dogs need to go for walks forcing the human to exercise and increasing the chance for social contact with other humans boosting their  immune system, the humans gave the dogs a point.  So as we roll our eyes and let out a heavy sigh, we give the utility category to the dogs.

Thank you for joining us.  Do you agree with the final score?  We would love to know what you think too.