I have a guilty pleasure. When I am tired and just want to relax and not think about anything, I like to watch Finding Bigfoot on Animal Planet.   They haven’t found Bigfoot yet, or even come close, but they  keep on trying.  Although the shows seem to follow a predictable pattern, I still watch because it is entertaining  hearing all the “squatch” jargon.   Even the phrase “Gone Squatchin” makes me laugh.

In one of the episodes, they claim that Sasquatch signal each other with their glowing eyes. And sometimes they claim there is  scientific evidence of certain Sasquatch  behavior.  How do they know?  Hey, maybe there are Bigfoots out there somewhere but honestly, if there is a Sasquatch out there, say in remote regions of the United States, even here in Ohio, wouldn’t the Bigfootologists be able to conduct intensive surveys by air, foot and perhaps even satellite photography? Shouldn’t they be able to find some hard evidence; bones, scat, something?

Paul doesn’t think Finding Bigfoot is as amusing as I do but maybe that’s because he hasn’t spent time out in the field. 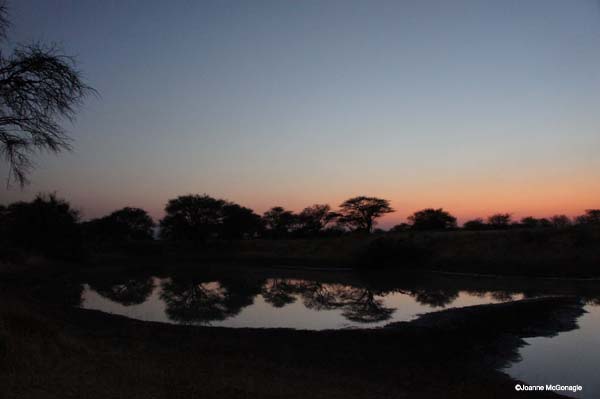 End of night at Namibian waterhole

When I was in Namibia at the Cheetah Conservation Fund, I  got to participate in the Waterberg Conservancy Waterhole Count. This conservancy-wide count provides population and density estimates and trends for various game species throughout the Waterberg Conservancy farms.  I was thrilled to be paired off with my friend and colleague Aulikki. I mean if you are going to spend twelve hours in a remote hide, you want to spend that time with someone like Aulikki.

We were driven out to our remote location, dropped off and then we hiked our way to the waterhole hide.  The sun was not up yet so we put down our gear and arranged our chairs so we could see the entire waterhole to begin the count.  We took in the beautiful landscape and the breathtaking sunrise we were about to witness.

Wildlife began to arrive, warthogs, guineafowl, gemsbok, steenbok with their big ears, and oryx. We wrote down the time, direction  the animals arrived, how long they stayed, what direction they left the waterhole  and if they had any distinguishing characteristics, like scars or missing a horn. 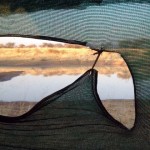 View from inside the hide 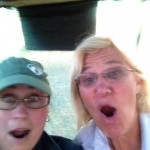 Is that a leopard? 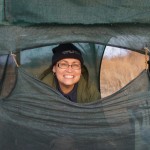 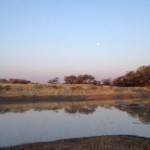 Part way through the count, a group of warthogs started towards the waterhole but stopped abruptly and retreated without drinking. A few minutes later a large group of guineafowl approached the waterhole just to the right of our hide, but they too stopped.  The lookout signaled to his group to flee the scene. So naturally this made us curious. Water is important so there must be a reason for the panic.

Using binoculars, Aulikki scanned the waterhole starting with the left side and carefully worked her way around until she began to scan to the right of us, when she too stopped, put down her binoculars and said to me, “I need you to look and tell me if you see anything.” She did this to prevent leading the witness.

So I looked through the binoculars and stopped scanning to the right of us and I said, “Do you see a leopard?”  and she whispered, “yes, I think so.” We took turns describing what we saw, like is the leopard standing or lying down, facing us or away from us.  We both were seeing the same thing. But still we were skeptical.  We were pretty sure we saw a leopard but the cat did not go to drink , just remained in the tall grass.

We sat calm and quiet  waiting for wildlife to return to the waterhole. Aulikki asked what we will do if the leopard decides to come over and visit us. I told her I didn’t think the cat was interested in us and besides, there was plenty of prey and she was probably full and resting. Somehow, my words of wisdom did not bring much comfort to Aulikki. She decided that if the leopard did come over, we would have to defend ourselves with bug spray.  I hesitated and said, “I don’t know if I can do that. Spray the cat in the eyes with bug spray.”  She looked at me sternly and said, ” You. Can. Do. It.”  I nodded in agreement and we went on with the count.

A steenbok arrived across the water but she didn’t drink.  She stopped, sniffed the air and ran back the way she came.  A gemsbok limped over to the water. Aulikki said, “Well, this might be the last drink for this guy.”  I winced  in agreement.  We heard a ruckus from a group of guineafowl in the distance, then silence.

About ten minutes later, warthogs, and oryx returned to drink. The injured gemsbok drank some more and limped away. 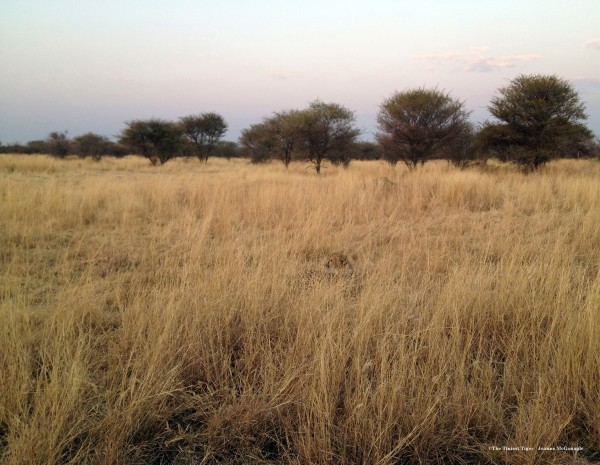 Camouflage is amazing. Even when  you know the cat is there, sometimes it is hard to see them.  The photo above is of a cheetah  in tall grass.  We knew she was there but it was still hard to see her.  The leopard was further away from us than the cheetah in the photo. We weren’t able to capture a good photo of the leopard from where we sat and we weren’t permitted to leave the hide.  We knew  our colleagues might not believe us when we returned  from the count,  but we know what we saw and the animal behavior supported that a predator was nearby. And thankfully, no bug spray was needed.

Cougars in the Adirondacks 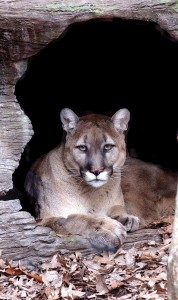 about the big cats.

The U.S. Fish and Wildlife Service declared  the eastern cougar officially extinct.  Because of this, any cougar in the east does not have Endangered Species Act protections. If cougars were to recolonize in  the east or the Adirondacks and a breeding population was confirmed, the U.S. Fish and Wildlife Service would have the evaluate protections at that time. There are no plans for any cougar restorations in the Adirondacks or anywhere else in the eastern United States at this time.

Cougars number in the tens of thousands west of the Mississippi River and occupy almost all large mountainous areas in western states. There are an estimated 15,000 cougars in California. In recent years, cougars have naturally recolonized several parts of the west including the Black Hills of South Dakota, the Badlands of North Dakota, and the Pine Ridge area of western Nebraska.

There have been numerous anecdotal reports in the Adirondacks of people spotting the cats, also known as mountain lions. Naturalist Peter O’Shea tracked Adirondack cougar reports for years, noting several hundred reported sightings since the early 1990s. Now, Protect the Adirondacks is taking over the task.  Protect’s director, Peter Bauer, says the group will work with wildlife experts to investigate credible reports.

There are healthy populations of cougars in the west, so it isn’t impossible to see a cougar in the east albeit unlikely.

More likely than finding Bigfoot?  What do you think?