Why are cat lovers called crazy? 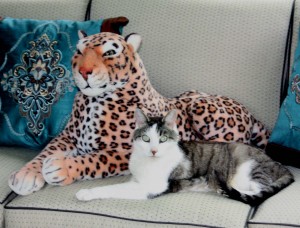 Lazy Leopard and I have to get this off our chests.  We are tired of the term Crazy being used to describe humans that love and care for cats.  Why crazy? I understand that the words flow, I too am a fan of alliteration.  The Tiniest Tiger™,  Conservation Cub Club™, feline finesse™, you see what I mean?   But why the word crazy?  Let’s take a look at the definition of crazy that I copied from my Dictionary (version 2.1.3 (80.4)) on my iMac.

The word crazy can mean mad as a March hare, but it can also mean passionate about or very keen on.  Something tells us when the word crazy is used with cat people, the meaning is slanted towards the off one’s rocker meaning.  We prefer the words devoted, passionate and even smitten to be used when describing the people that love cats. Because here’s what.

You don’t hear people being called a Ditzy Dog Dude, or Demented Dog Dame, well do you? No! You hear the term extreme dog lovers, for the folks that take their dogs on high-end vacations, host birthday parties and wedding ceremonies. Dog parents love their dogs and cat parents lover their cats. So why  are only cat parents called crazy?

Lazy Leopard and I decided to consider this further and we came across more than a few examples that show dog parents can be, dare we say, even more crazy...enthusiastic when it comes to their canine companions.  Let’s take a look at a few the Lazy Leopard Research Institute* uncovered for us.

Dog parents pamper their pooches, in what might be considered …crazy fanatical ways. Dogs go to spas, get massages, are groomed in highly stylized ways. Let’s take a look. 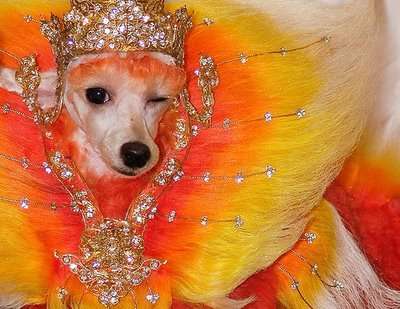 Wow! This dog must have an enthusiastic parent. 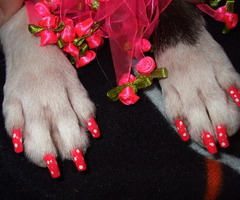 Not to be confused with the African Wild Dogs, unique to Africa and among the continent’s most endangered species, I am talking about crazy extreme dog lovers that actually paint their dog. In addition to the Beauty Parlor Dog above with all the bling there are those that  paint their dogs to look like other animals.  For example, this dog was painted to resemble a tiger. 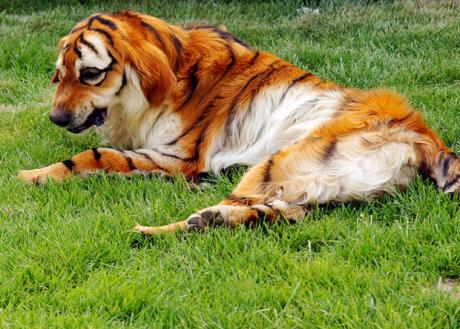 I understand wanting to be a tiger. I really do but.....

Crazy can also be used to describe things that are silly, foolish,  half-baked, you get the drift.  We thought this next image was perfect to show what we mean.

I know some dogs that have more outfits than their crazy loving parents.  Many dogs wear costumes too.   Some dogs even seem to enjoy wearing clothing.  For example. 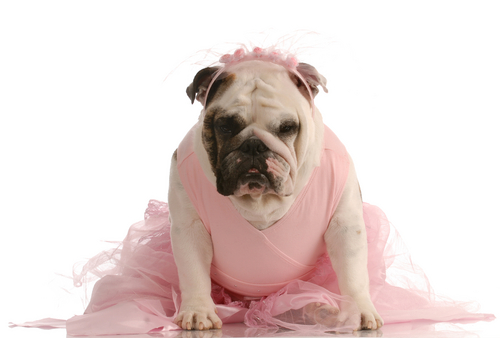 This dog is exuding joy!

Now before you start barking at us, we would like to say that we love dogs too. Some of our best friends are dogs and extreme dog loving people.  We are not judging their lifestyle and choices. We just want to stop the use of the term crazy cat people for  extreme cat lovers. We prefer the term passionate parents.

As cats, we are super curious to learn. What do you think of the word crazy used for cat lovers?

The Lazy Leopard Research Institute is a fictitious facility.