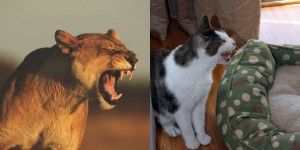 I have been thinking about the film The Last Lions, An Incredible True Story of Survival from National Geographic Entertainment ever since I watched it for the first time. I was so moved by the film that I wrote a review here on our Conservation Cub Club.  The film was made by  Dereck and Beverly Joubert, award-winning filmmakers from Botswana, Africa.  The Jouberts  have been National Geographic explorers-in-residence for over four years.  Their body of work has produced five Emmy’s, a Peabody, the World Ecology Award, and induction into the American Academy of Achievement.

I just can’t seem to get the film out of my mind.  I was swept away from the opening scene and followed Ma di Tau’s struggle to survive throughout the film.  A great documentary film with  a message should leave the viewer thinking and I have been thinking about the lions in Africa ever since. Have you seen The Last Lions yet?

In tribute to Ma di Tau, the lioness in The Last Lions, I present to you my latest The Tiniest Tiger imitation.  This imitation is super tough.  You are really going to need to take your time and analyze the image very carefully.  I hate to brag, but I think I have really  nailed this one.

Notice that both lions are in their own habitats with the sun is setting behind them.  Notice too the placement of the ears. Identical! Both are slightly back and a little lower on the heads.  Notice also the squinting of the eyes. Both are almost fully closed but do not think that you could sneak up on either one without being spotted. And it just gets harder from here doesn’t it?  I mean the teeth, the position of the mouth, and even the black on the lips, is the same, same, same!  Ok, now take it easy and try to decide if Ma di Tau is on the left or on the right.  There is no hurry, I don’t want to stress you even more.