Friends, whenever I leave Lazy Leopard and Bossy Backyard Blue Jay together  for more than a few hours I tend to get a little worried about what might begin to transpire.  It is not that I don’t trust them, it is that they think a little differently than I do.  Now, this is not necessarily a bad thing, but sometimes left to their own devices, their imaginations get carried away and the resulting actions might be a bit exaggerated from what you and I might deem as taking essential precautions and readiness. Especially Bossy Backyard Blue Jay, he operates at a high level of preparedness.

As you must already know, Bossy Backyard Blue Jay has a bird brain.  That means he was born with incredible instincts and programs that enable him to do remarkable things. I know some of you humans use the term “bird brain” to refer to another human that you think might not be able to hunt with the rest of the pride, but the truth is, birds are super intelligent and are pre-programmed  with   amazing software.  Think about the birds ability to  migrate long distances without a map or a TomTom?  I have heard of humans not being able to find their way around the block  relying just on their instincts.

As for Lazy Leopard, well he is stuffed full of ideas!    He really is!  So when I returned from my investigative reporting yesterday, I should not have been surprised by what I found in our back yard.

It has been raining, raining, raining at my habitat.  And  we are experiencing cooler temperatures than normal for the middle of May. In fact just yesterday on May 17, a.k.a. Norwegian Independence Day, we had one of the coldest days on record for the date!

The cooler temperatures with the incessant rain combined with the date, caused Bossy Backyard Blue Jay to become overly excited and kick his instincts into a higher gear.  It didn’t take much persuading to convince Lazy Leopard to help.

This is the result for their efforts. 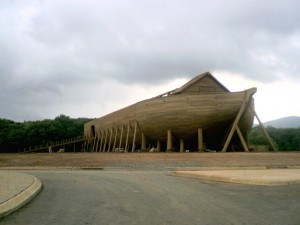