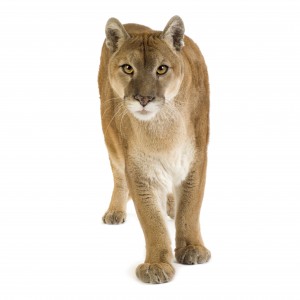 Fear of predation causes behavioral changes. This is documented both in research and has proven true through the test of time.  White tail deer living in the eastern United States changed their foraging habits from grazing  and moving on to spending longer periods of time eating in place with the extinction of the Eastern Cougar. Without  the top predator lurking about, the deer  adapted a more relaxed dining style wreaking havoc on the ecosystem, causing soil erosion among other issues.

Up until now,  little was  known about the impact humans, as top predators, have on the behavior of carnivores.  A recent study* investigated the influence of human-induced fear on puma foraging behavior.  The study used location and prey consumption from thirty tagged puma living alongside human dominated landscapes.

Pumas Dine and Dash Out of Fear of Humans

The territory and hunting grounds of these tagged puma  were  identified, breaking the pumas up into two groups: those  living in rural environments and those living in suburban human environments. The research team also investigated kills, measuring consumption of each kill  before a puma decided to move on.

This  increase in predation was not due to increased hunger by the suburban pumas but is likely the result of human-induced fear.  This behavior by the carnivores is analogous to the behavior of the white tail deer when sharing an ecosystem with a top predator. The behavior is similar but the environmental impact is yet to be determined. The loss of food from the decline in prey consumption along with increased energy expended to take down more prey may have ramifications for puma populations, in particular with reproductive success. In addition, more carcass availability left over from the pumas dine and dash behavior could bring in a larger number of scavengers looking for a meal.

This study sheds light on the importance of understanding  the extensive and growing indirect impact of habitat modification by human activity on animal behavior. As the human population increases so does the need to understand the impact on ecosystems and the entire food web function.