Our oceans have a great wealth of diverse species but they are in trouble. Climate change is linked to the killing of coral reefs and destructive fishing practices have led to a

dramatic decline in many types of fish and sea life we depend on. Today is World Oceans Day so I thought we could spend a few moments thinking about what we can do to help support our oceans.

McDonald’s, one of the nation’s largest single buyers of fish,  announced earlier this year that it would begin serving Marine Stewardship Council certified sustainable fish at its 14,000 restaurants. This proved that responsibly sourced fish ,the once thought to be only a  niche market, was making its way into the mainstream.

More than a third of consumers polled in 2012 ate sustainable food at least weekly, up from 27 percent two years earlier. According to Darren Tristano, executive vice president of foodservice research firm Technomic: “We’ve seen an increase in the marketing of sustainability for two reasons.  The first is that chains are taking responsibility for sustainability practices that were already in place and also because more restaurants and suppliers have taken a step in that direction.”* 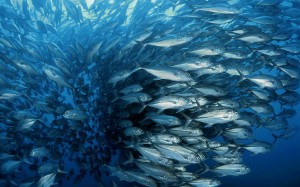 Although there is not one definition of “sustainability” as it relates to marine life, most experts agree that it is related to species biodiversity, the number of different

species in a given habitat, ecosystem integrity and long-term productivity. The Monterey Bay Aquarium’s Seafood Watch is the industry leader in information on ecologically responsible fishing practices. Sustainable seafood comes form sources whether fished or farmed that can maintain or increase production without jeopardizing the structure and function of affected ecosystems.

While environmentally friendly harvesting or fish-farming practices may lead to higher costs, research indicates that consumers are willing to pay a premium to eat sustainable seafood.  A 2013 study conducted on behalf of National Public Radio showed that half of those polled were willing to pay more for sustainably caught seafood and according to the Alaska Seafood Marketing Institute nearly three-quarters of customers surveyed found it important to know the source of the seafood they buy.

While sustainable seafood has expanded in retail environments, both Whole Foods and Target have committed to selling only sustainable seafood in their stores, the concept has been slower to catch on in restaurants. The Technomic survey concluded that 28 percent of consumers looked for products marked sustainable at retail stores, while only 16 percent looked for them on restaurant menus.* But that is changing for the better as the growing availability and customer demand for responsibly sourced fish make it an increasingly smart business move to source, serve and promote sustainable seafood. 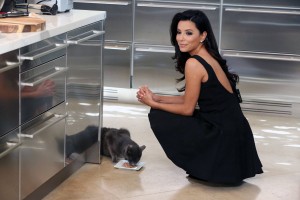 As the  world population increases so do demands for food and not only for humans but for our feline family members too.  There are an estimated 74,059,000** cats sharing our homes in the United States alone.  That is a lot of food and although we might think there are a lot of fish in the sea, we might consider the source of our cat’s seafood as well as our own.

In March 2010, the global petcare segment of Mars made a commitment to use only sustainably-sourced fish by 2020. As global fish stocks continue to decline, the company aims to achieve the following milestones across its entire pet care portfolio by 2020:

Following the Monterey Bay Aquarium Seafood Watch® program sourcing recommendations, which are science-based, peer reviewed and use ecosystem-based criteria, SHEBA Entrées will use only farmed or wild-caught fish from environmentally responsible sources.

SHEBA currently offers five varieties of responsibly-sourced whitefish, tuna and seafood options, and by the end of 2013, all the SHEBA recipes, including salmon, will meet the Seafood Watch recommendations. 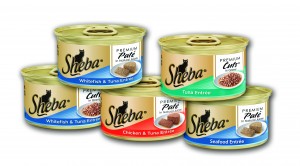 Let’s all celebrate World Oceans Day every day.  From The Tiniest Tiger’s Conservation Cub Club we would like to thank everyone that sources sustainable seafood for not only themselves but for their feline family members too.  Small paws united can make a big difference.  Thank you to Sheba for taking this step toward sustainability.

Previous Post: « Please Nominate Gracey’s Conservation Cub Club for a 2013 Pettie
Next Post: Trying to Save Birds Our Message to Gracey after 3 Weeks »