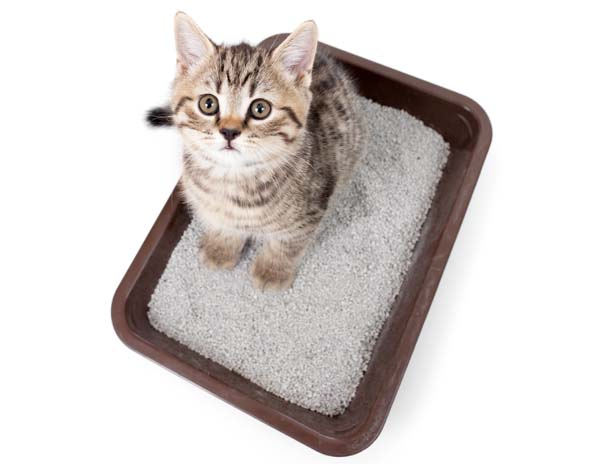 Thinking About Your Cat’s Litterbox

No doubt you’ve spent time cleaning, scooping and perhaps smelling your cat’s litterbox. More than likely you’ve spent time thinking about your cat’s litterbox. Where do you put the litterbox?  Hidden in the recesses of the basement or out in the open for everyone to see?  What type of litter should you use?  Clumping or non-clumping, scented or unscented litter?  Do you immediately plug-in a room freshener near the litterbox  hoping to mask the smell?  Hooded or open litterbox?  What size litterbox? Does size matter when choosing a litter box?

If you spend time thinking about your cat’s litterbox, it is time well spent and here’s why. Inappropriate elimination, going outside the box, is the most common reason owners give when they surrender their cat to a shelter. In an article by Dr. Karen Becker you will find sobering statistics about how serious missing the litterbox is for cats.  The article tells us that an estimated 4% of cats urinate outside the box on a weekly basis. The 1% of cats who go outside the box on a daily basis are 28 times more likely to lose their home and family according to Dr. Nicholas Dodman, a professor at Tufts University’s Cummings School of Veterinary Medicine quoted in the article.  And 10-24% of cats will have an inappropriate elimination problem at some point in their lives.

The term inappropriate to describe the failure of a cat to use a litterbox is something of a misnomer according to the authors of a research study at Atlantic Veterinary College, as the choice of an elimination area may not be inappropriate from the cat’s perspective.

A cat’s failure to use the litterbox is undesirable  from the cat owner’s perspective, but from the cat’s perspective such failures include information about that cat’s preferences and needs.  Not all cats will require a larger litterbox to behave in a manner that is acceptable to most owners, but it is clear from the Atlantic Veterinary College study that footprint size of the box is an important factor to many cats.

Chances are, if you share your home with a cat, you will have occasions where your cat goes outside the box.  After you have taken your cat to your veterinarian to rule out a health condition it is time to rethink the litterbox from your cat’s point of view.

Rethinking the Litterbox.  Put Yourself in Your Cat’s Paws

There are  a multitude of litterbox choices but most of these choices are based on what we  humans want for our cats, not what our cats need.  Litterboxes come in nearly every color in the Pantone Color Guide, but your cat doesn’t care if the litterbox matches your home’s color scheme. A cat’s needs are basic and easy to meet if we don’t mess it up with what we want over what they need. Put yourself in your cat’s paws and rethink the litterbox from your cat’s point of view.

More is better than less. The more you scoop the better for your cat.  If you can scoop several times a day, you will have a happier cat. If you have a multiple cat home, then this is even more important. Why?  Put yourself in your cat’s paws.

When was the last time you were forced to eliminate in a toilet that was not flushed after being used?  For me, this was just yesterday as the city was working on the sewer system in our neighborhood.  We were told not to flush the toilets between 8 am- 6 pm  or until the work was completed.  The work ran late until after 7 pm.  I don’t want to complain because we are fortunate to have a sewer system and clean running water but it was most unpleasant at the end of the day.

How about the last time you were on a long haul flight and you couldn’t hold it any longer and just had to go an hour before landing?  Or, have you ever been forced to use a portable toilet at a crowded event?

I myself, have been known to stop drinking water and risk dehydration to avoid being forced to use a portable toilet at outdoor events. I understand if you laugh at this, I own the fact that I have issues in this area.  And, I don’t think I am alone.

In the briefing before our field expedition to Kenya, the most commonly asked questions were about nothing other than what  should we expect  to find in the camp regarding the latrine.  And the first answer given  ” There will be facilities” did not satisfy the angst brewing among the group. Details were demanded.  When they were given, eyes widened and collective deep breaths were heard.  The facilities would be a type of sandbox. But don’t worry, we were assured, there will be shovels to cover our tracks with sand.

Well,  I felt reasonably  prepared for using a sandbox. After all, I had been keeping Gracey under surveillance using her litterbox  making sure she had no issues and certainly understood the concept.  I did pray for cat like agility and balance or even a tenth of a cat’s ability to balance myself over the box.

All that worry was for naught when we arrived at our camp because yes, there was a sandbox but it was covered with  a box and a seat! And as promised there was a box of sand and a shovel to throw on top of our waste. 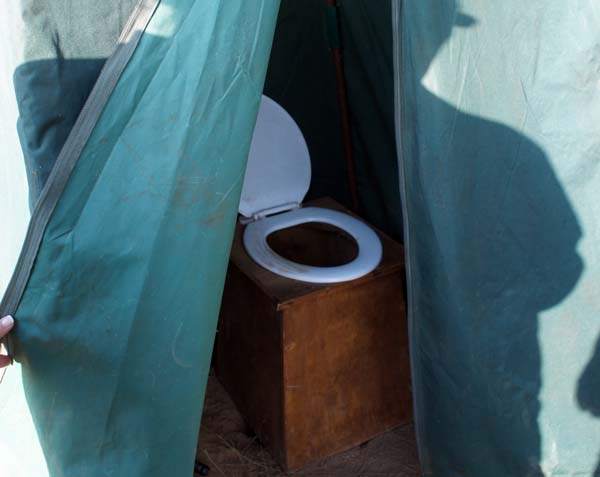 In the photo, that is sand on the seat, not something else, but you can imagine if this box went too long without being emptied. When the cover was zipped closed, the smell was impressive. So sometimes at night, by the glow of a headlamp, some of us were known to go outside the box.  Not right beside the box of course but outside away from the box.

Think of  your cat on their way to relieve themselves only to find a soiled box with deposits from their housemates too! Remember your cat’s sense of smell is nearly 15 times stronger than ours, so imagine how stinky the litterbox in need of scooping is for them. 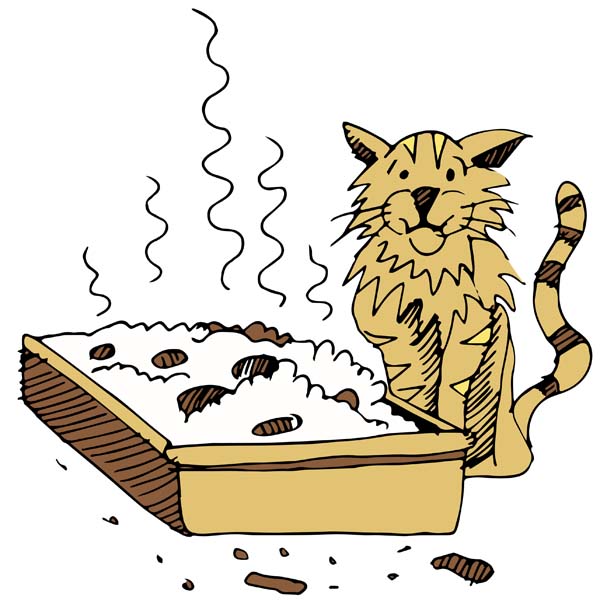 If your cat goes just outside the box, they might be refusing to use the dirty litterbox just like we decided not to use the smelly dirty sand box. Don’t find fault with your cat, but with yourself for not providing a clean option.  Remember, your cat is completely dependent on you to provide a clean litterbox.  So next time you walk past the litterbox, just go ahead and scoop, in fact check it every time you walk by to make sure everything is clean and free of clumps for your cat.

I stopped writing this article and scooped our cats litterboxes.  I am back now.

Place the Litterbox in a Convenient Location With an Open View

Many of us that share our homes with cats, place the litterbox as far away as possible from our own living area: the back corner of the basement,  inside a cabinet or even behind the washing machine.  Have you ever had that “gotta go” feeling when you are out and ask where you might find the nearest restroom only to be told down the stairs past the furnace room and around the corner?  Be honest, it’s a little creepy to seek out the bathroom alone down a narrow corridor.

Cats are hardwired to be on the lookout as both prey and predator.  So if you place your cat’s litterbox in a location that puts your cat in a vulnerable position they  might not use the box.  Cats need a full view so that they can relax, do their business, and escape without conflict.  This is especially true in a multiple cat home and mandatory if you have a cat that is aggressive towards another cat.  Remember the litterbox rule too. One more litterbox than cats in the home. One cat, two litterboxes. Two cats, three litterboxes and so on.

Covered litterboxes are not the best option in my opinion for the same reason of a possible ambush and just like our sand box in Kenya and the portable toilet, the odor is more intense in a closed in space. 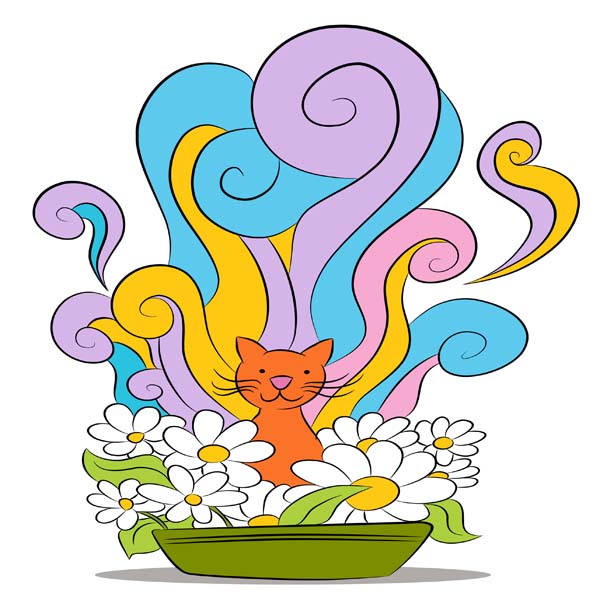 Have you been stuck in an elevator with someone wearing too much perfume or cologne or walked into a restroom with one of those contraptions that automatically sprays deodorizer into the room?  You can’t wait to get out of there, right?  So imagine if that smell were 15 times stronger?  Would you stay or would you seek out another location?

I confess, Paul and I (mostly Paul)  have been guilty of plugging in an air freshener right beside one of the litterboxes.  No matter how Lovely Lavender or Daisy Fresh the packaging claims your house will be, these fresheners do not cover up the litterbox smell but add more smells into the environment around the litterbox.  Remember your cat’s sense of smell is 15 times stronger than our own, so that light scent you think is improving the air quality, can be a big turn off for your cat and might cause her to seek another location.

Your Cat’s Needs In a Litterbox

When it comes to a litterbox, your cat needs:

Your cat’s needs for the litterbox are basic and easy to meet.  Just don’t complicate it from what you prefer over what the cat needs.

What do you think?