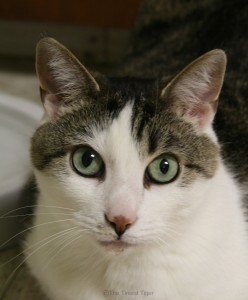 Yesterday, not too far from my habitat, innocent animals that had been living in deplorable conditions were set free from their cages and their owner was found dead on the farm where he kept these animals. The media began reporting that lions and tigers and bears were on the loose in Muskingum County.  But the truth was that most of these animals were still nearby their habitats. I bet they were frightened and confused.

In total there were 56 animals. 48 were killed right away:  18 tigers, 17 lions, 6 black bears,  3 mountain lions, 2 grizzly bears, 1 baboon and 1 wolf.  While many were criticizing the Sheriff’s department for putting the animals down, with only one hour of daylight left, and the possibility of  large carnivores escaping into the night, the Sheriff did the best that he could do. The safety of people in the surrounding area had to come first.

The Columbus Zoo was able to transport  3 leopards, 2 monkeys, and 1 grizzly bear.  For a period of time the news reported that only 1 grizzly bear, 1 mountain lion and 1 monkey were still on the loose but last report in, all the animals have been accounted for; 50 animals dead and 6 being cared for by the capable staff at our Columbus Zoo and Aquarium.

A few weeks ago  I asked  our small paws to unite to make a difference by signing our names to the most important action to save Tigers in over 10 years  That was for The U.S. Fish and Wildlife Service’s  proposal to amend the regulations that implement the Endangered Species Act by removing inter-subspecific crossed or generic tiger (Panthera tigris)(i.e.,specimens not identified or identifiable as members of Bengal, Sumatran, Siberian or Indochinese subspecies) from the list of species that are exempt from registration under the Captive-bred Wildlife (CBW) regulations.

You might be wondering why this is so  important.  There is an estimated over 5,000 tigers in captivity in the United States and the reason we don’t know how many tigers are in captivity is because in 1998  the US Fish and Wildlife Service created a rule that exempted “generic” tigers from the permit and reporting requirements that apply to endangered species.  So the tigers living on this farm in Ohio, were not registered, were not properly cared for and in the end, were gunned down to protect  public safety.

We also learned about Michael Webber’s award winning film The Elephant in the Living Room that takes you on a journey into the depth of the controversial American subculture of raising and selling some of the world’s more dangerous animals, as household pets.  The Elephant in the Living Room also gives the viewer a sneak peek at the Mount Hope Exotic Animal Auction held in the middle of what appears to be  serene Amish country.  The blend of the heartland of Ohio mixed with the undercurrent and subculture of trading in exotic and dangerous animals gives the whole scene a rather spooky feeling.

There was an order issued by Ohio’s previous Governor Ted Strickland that prohibited anyone who had been “convicted of an offense involving the abuse or neglect of any animal pursuant to any state, local, or federal law” from owning exotic animals.   Had the current Ohio Governor John Kasich not allowed this executive order to lapse after taking office, Thompson would have been prevented from owning exotic animals.  You see, Thompson had an animal cruelty and two other related convictions in 2005, and had just been released from prison after serving one year on federal weapons charges.

So I am asking you to once again take action. Ohio does not regulate private ownership of dangerous wild animals, jeopardizing public safety and animal welfare.  Please help animals now by telling Ohio It is time to ban dangerous exotic animals from backyards and basements.  You can sign the petition here.

Thank you for caring for all animals big and small.