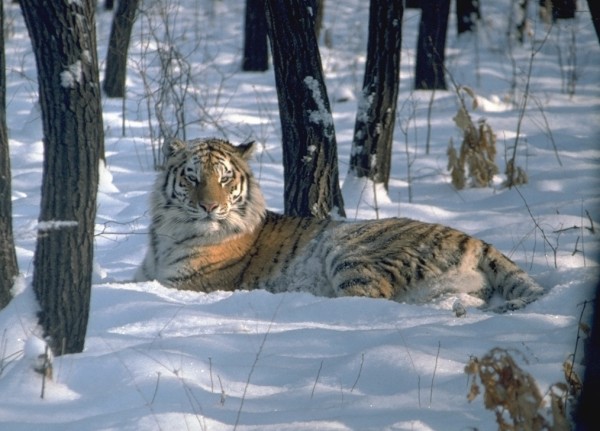 One bitterly cold afternoon, two hunters in Russia’s remote Primorsky Province were stopped in their tracks. There lying in a snow drift was an Amur tiger cub. Hearing the hunter’s footsteps, the cub didn’t roar to scare off the hunters nor did she slink away into the wilderness.  The cub estimated to be about four months old remained lying on her side in the snowdrift, her breathing shallow and her eyes glazed and distant.

The hunters grabbed a blanket and tossed it over the cub’s head and transported her to the home of their local wildlife inspector in a nearby town.  The inspector saw that the cub had not eaten for days and the tip of her tail had turned black with frostbite. Realizing how dire the situation was for this young tiger, he made an enclosure for her in his wood-lined steam bath and fed her a steady diet of meat, eggs and warm milk.  In two weeks time she was back up on her paws and pacing.  Encouraged by her progress, he named the cub Zolushka, Cinderella in English,  and called on Dale Miquelle, an American scientist and foremost expert on the Amur tiger, based in Primorsky.

Zolushka was sedated and a team veterinarians performed surgery to amputate the necrotic tip of her tail.  Miquelle and his team moved the tiger cub to the Center for the Rehabilitation and Reintroduction of Tigers and other Rare Animals, 50 miles to the south in Alekseevka.  The center is operated by a coalition that includes the Russian Geographical Society and the government-funded Inspection Tiger. There is sheeting on all fences, so the tigers can’t see outside, and chutes are set up so that prey can be introduced undercover.  Cameras are installed allowing scientists to observe the animals from a control center without disturbing them.  There are two goals for the Center; to not let the animals get acclimated to humans and to teach the animals to hunt. 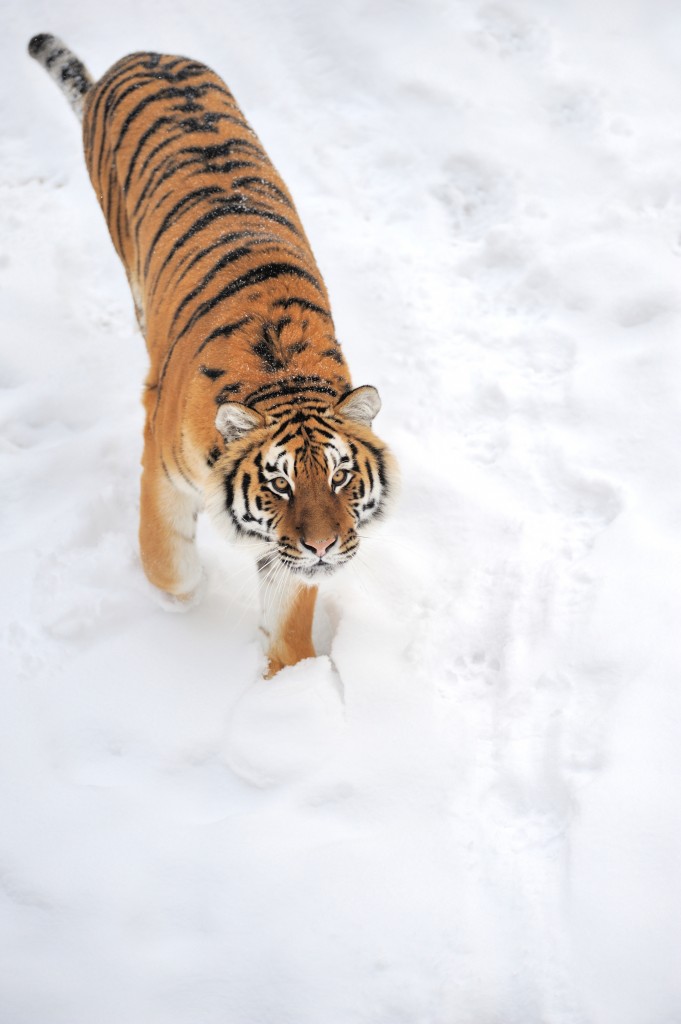 Wild predator rehabilitation is practiced and has been successful with bears, lynx in North America and once in India with Bengal tigers. But the release of an Amur tiger is a huge risk in the Primorsky region. If a rehabilitated cub became a “conflict tiger”, it had the potential to set back tiger conservation perhaps a hundred years. But the upside of reintroduction of the Amur tiger is huge.  If orphaned cubs could be released to the point of mating with wild tigers, not only would the tiger population get a boost, but also tigers could begin to repopulate regions where tigers have disappeared for decades.  If Miquelle’s team succeeded with Zolushka, their method could be duplicated in other countries.

Zolushka was the first tiger to be brought to the Alekeevka center. In the early months, she was fed meat tossed into her via the chute system. Then she was given rabbits, which were fast but defenseless and eventually graduated to wild boar and onto the larger sika deer. Zolushka learned to be a skilled hunter and in a little over a year, she was ready to be set free. 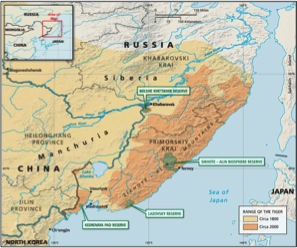 This region is truly the tiger’s last wild range.  In India, tiger preserves are enclosed on all sides by the sprawling human settlements. The Russian Far East remains a vast and largely empty frontier with the population clusters around Vladivostok, the port city and last stop for the Trans-Siberian Railway.  This is home base for the Wildlife Conservation Society Russia and Miquelle.

Miquelle’s work is both research and conservation.  He strongly believes that conservation success is related to how much you know about the animal.  And he knows a lot about the Amur tiger.  Miquelle and his team have worked through depressing times where almost every tiger they were studying was poached and they saw the tiger population dip to an estimated 330 to 371 tigers and perhaps 100 cubs.  In 2005, a second census estimated the population to be between 331 and 393 adults and 97 to 109 cubs. Today Miquelle is confident that the Amur population has stabilized and is planning another census this winter to determine if this is true.

But stabilizing a population is quite different from a growing population and that is what makes Zolushka’s story so important.  Her successful release back into the Russian Far East could lead the way to reintroducing Amur tigers into their historic range.

Zolushka’s Cinderalla Story is a Milestone for Tiger Conservation

Zolushka appears to have found a strong male tiger that the scientists named Zaventy. The two tigers are sharing a range and evidence shows they have been feasting on the same kill. Tiger tracks examined indicate Zolushka, who is now of breeding age, may have mated with her male partner.  Miquelle hopes that he will soon see a camera trap photo of Zolushka with cubs following behind her.

She would be the first rehabilitated tiger in history to mate and give birth in the wild.  Zoushka’s Cinderella story is a huge milestone for tiger conservation.

Previous Post: « You Are Invited to Enter Tidy Cats Littervention Contest
Next Post: Which is Your Favorite Cat Tote For Spring? »