The wild tiger’s shrinking numbers are due to habitat loss caused by human encroachment, poaching fueled by greed, and starvation from lack of prey.  Wild tigers need plenty of room to roam and the tiger’s contiguous territory is shrinking.  Human populations and economic expansion has led to the razing of tiger habitats for plantations, mines and other agriculture. Over development by humans has left the tiger population in fragmented groups, leading to smaller genetic units with limited availability of prey animals.  The tigers caught in these tiny territories are the most vulnerable to the most pressing threat; poaching.

To make matters worse, the increasing captive tiger population camouflages the severity of the wild tiger crisis. So many captive tigers estimated at over 5000 in the United States alone, may make it hard for the average person to fathom that tigers are at risk in the wild.

Here is a summary of the results of those surveys.

When asked which big cat came to their mind first, 60% answered tiger. The survey title may have influenced the answers so this question was asked in the Big Cat Survey with 45% favoring the tiger.  A slight majority knew  the tiger is the largest of all big cats, 64% knew  tigers were the only cats with stripes and no spots and 100%  knew  the big cat’s stripes are like fingerprints, that no two are alike.

An overwhelming majority, 98% of the participants, did not think it was acceptable to keep the big cat as a pet or in a cage with a cement floor.  Only 13% said they liked to see tigers perform at circuses or other arenas.  An alarming 39% believe that tigers are important for medicinal reasons, the main reason for tiger poaching; there is no scientific evidence that tiger parts are effective for any medicinal use.

Even though the white tiger is not a  subspecies, 30 % chose the inbred white tiger as their favorite and 60% believe that the captive breeding of white tigers is important for conservation. Although 36% chose the correct answer, “none of the above”, for the white tiger’s native habitat, Siberia garnered 25% and Southeast Asia drew 22%. To muddy the waters further, 99% did not think that tigers should be inbred to create coat colors that do not enable their survival in the wild, yet that is exactly what happens every time a tiger is inbred to produce a white offspring. 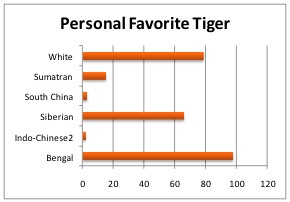 Every single participant agreed that it would be a tragedy if the remaining subspecies of tigers were to go extinct, while 96% are worried about the tiger’s future, 88% understood that there are more tigers in captivity than in the wild and 82% think Zoos play an important role in the survival of the remaining tiger subspecies. The combined participants from both surveys were 92% female,  33% were between 35-44 years of age and 90% live in North America, 9% in Europe and 1% in Australia.

Will you tell me how you feel personally about Wild Tigers by taking my poll?