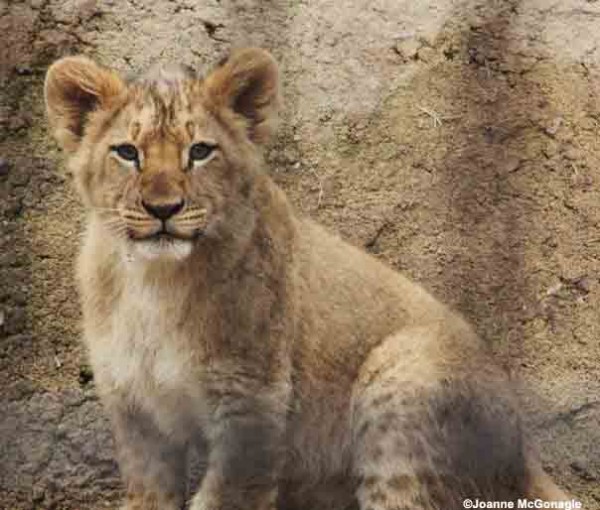 Lion cub admired from afar at the Columbus Zoo

Lions Cubs Are to Be Admired Not Cuddled

More often than not, when I post an image of a cub there will be comments that say, “I want one.” or “I wish I could hug that cub.” When I see these comments, I get a knot in my stomach.  It isn’t because I don’t understand the urge. Let’s face it, cubs are cute. But big cats even when they are cubs are not companion animals.

I visited a lion retirement home near Las Vegas a couple of weeks ago. The Lion Habitat Ranch touts itself as being the home of the lions previously on exhibit at the MGM Grand‘s Lion Habitat that opened in 1999.  The  5,000 square-foot glass-encased structure provided a place where visitors could view the lions napping and playing from the perimeter of the habitat or through a glass tunnel that cut through the exhibit.  Twenty lions were rotated in and out of the exhibit by Keith Evans, the owner of The Lion Habitat Ranch also known as The Cat House, an 8.5 acre ranch just outside of Las Vegas.  The MGM Grand closed the lion habitat at the end of January, 2011 ending the contract with Evans to shuttle the lions back and forth from the ranch to The MGM Grand.  The Lion Habitat Ranch claims they care for 40 lions that appeared at the hotel habitat at some point in their lives.

I remember seeing the lions at the MGM Grand many times.  I used to be in Las Vegas selling frozen food products to the property. I recall being able to pay to have your photo taken with a lion cub and although the thought crossed my mind, something told me it was wrong. And that was many years prior to my zoology studies. 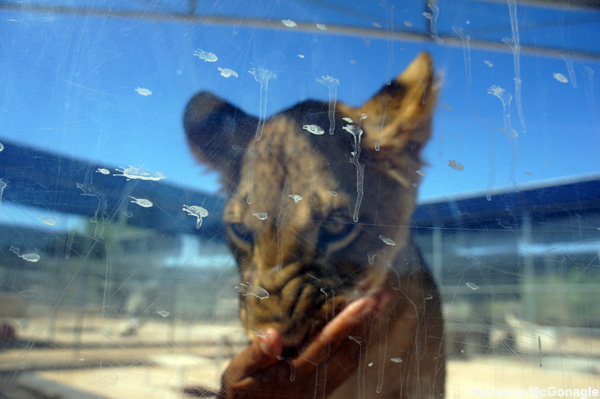 As soon as we walked into the  facility, we saw young lions being hand fed by a caretaker.  This caretaker was inside the enclosure with the lions, hand feeding them what looked like raw hamburger. She invited us to step up to the window, generously splattered with bird droppings, to get a better look and snap some photos. 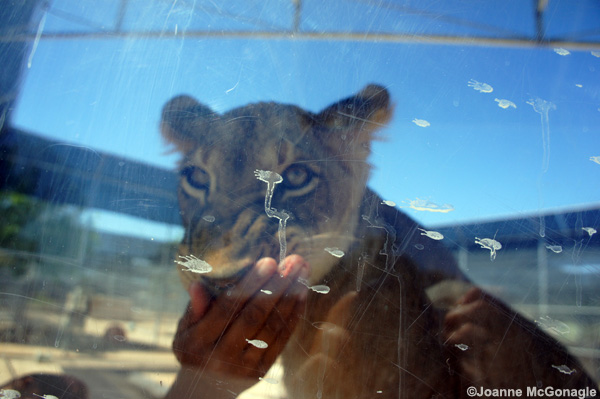 It was hard to get a good photo between the bird droppings and the glare from the bright sun against the glass. It was also hard to watch, knowing this type of feeding is not a best practice and should not be promoted as such.

Not All the Lions Participated in the MGM Grand’s Exhibit

Walking through The Lion Habitat Ranch it was clear  not all of the lions living there were once part of the MGM Grand’s exhibit. Many of the lions had not even been born when the exhibit shut down at the end of January in 2011.  We saw a number of males lions just starting to develop their manes, placing their ages between 2-3 years.  There were also juvenile females caged together trying to stay out of the sun. The temperature was 112 degrees and even with low humidity, was plenty hot to be standing out in the sun with little to no shade available. 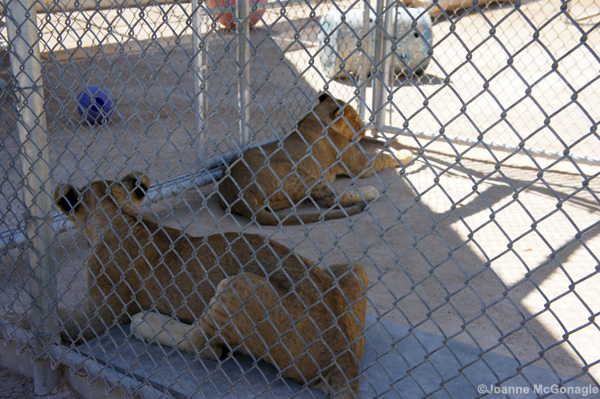 I didn’t see any pools for the lions to cool down, in fact, I didn’t see many options for shelter from the harsh sun.  A few tarps draped over the fencing and wooden boxes where the lions could climb inside to escape the direct sun but certainly not the heat. Some enclosures appeared to house five or more lions. 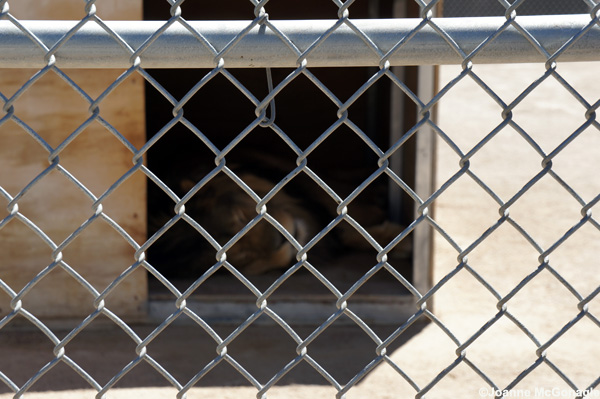 Lion sleeping inside a wooden box

Walking around the facility, we saw more of the same.  Chain-link enclosures with dirt or sandy floors, little to no shade, a few boomer balls, some logs for scratching and wooden boxes.  Two adult male lions roared in chorus after a back and forth pre-roar conversation made up of huffing and puffing.   A full roar can be heard up to five kilometers away but these two males didn’t muster up a full throttle roar. 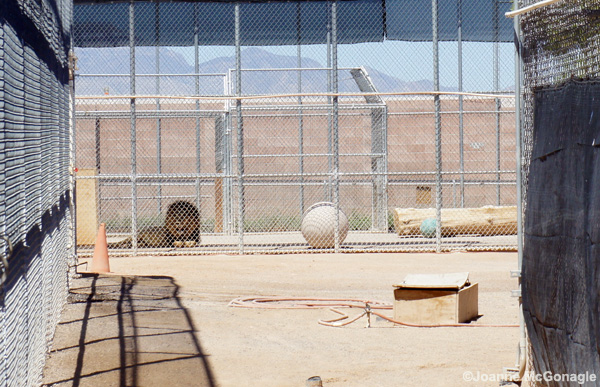 Rounding the final corner  we saw another caretaker inside an enclosure with a young male.  This young lion had required surgery on his shoulder and was said to be doing well.  She gave him a shank bone and explained to a visitor and her child  that today was one of this lion’s fast days.  She went on to say that in the wild, a lion would not eat every day.  This was a far cry from the wild. 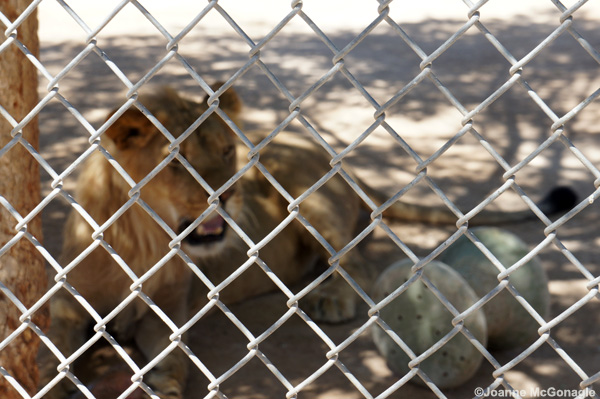 The caretaker began to tell the mother and child that they could hand feed a lion too.  The price starts at $100 per person per one pound of food. Then it is $50 for a second person sharing that same pound of food.  The caretaker told the mother that it was perfectly safe, provided the child followed her instructions.  I couldn’t help but shiver thinking of the most recent news stories about irresponsible people being bitten by big cats.

Renae Ferguson, a woman from Michigan, thought she would pet a lion at Sunrise Side Exotics and Nature Trail in East Tawas, about 130 miles north of Detroit.  In what has turned into her word against the lion’s owners, Ferguson claims she had permission to enter the lion’s cage and the owner claims Ferguson went into the security area even though she was told to get back. For whatever reason, Ferguson decided to pet the lion and ended up losing part of her finger in the process.

An 11 year old boy had his hand torn off by a tiger at a zoo in Brazil after his father allowed him to climb over a safety barrier and pet the tiger. Videos taken by visitors to the zoo earlier that day show that same boy, feeding something to a lion and then taunting the same tiger that bit him.

Feeding a lion even through a fence is not safe and should not be promoted as such. It shouldn’t be happening.

True Sanctuaries Do Not Breed

A sanctuary or retirement home should provide care and shelter for animals that have been abandoned, abused or neglected. Many big cats end up in the care of established sanctuaries when they become too expensive and or too dangerous for their owners to keep.  Sanctuaries exist to take care of animals that have nowhere else to go.  A true sanctuary does not breed.

Breeding more big cats just adds to the number of cats living in substandard conditions.  The Lion Habitat Ranch claims the lions in their care were the same lions that were on exhibit at the MGM Grand.  That may be true for some of the adult lions but not the lions that are too young to have been part of that exhibit.  The ranch has a pamphlet it hands out to visitors explaining how expensive it is to feed a lion.  Then stop breeding more mouths to feed!

Please Do Not Pay to Play With Cubs

The Lion Habitat Ranch advertises Cub Interactions.  The United States Department of Agriculture (USDA) has ruled there should be no public contact with cubs until they are at least 8 weeks old due to their immune system prior to their first vaccinations. The USDA has also ruled there should be no public contact after cubs reach 12 weeks of age because they are then large enough to be dangerous.  This short 4 week window means facilities  need to keep breeding to produce cubs to perpetuate this revenue stream. After the cubs are no longer able to be part of the interaction, they are placed into the other enclosures for a long life of what appeared to be minimal enrichment and care.

We didn’t stay very long, we had seen enough.  An overwhelming feeling of sadness washed over me and I felt the need to say out loud to the last lion I saw that I was sorry and I wished he had a better life.  I couldn’t shake the feeling.

This week I saw a photo of a baby in between two tiger cubs taken during what Wildlife in Need, Inc calls Tiger Baby Playtime . Big Cat Rescue shared this photo on facebook to educate. They want everyone that sees this photo to think “This is wrong” not “Oh, how cute.”

What parent would allow their child to be placed between two tiger cubs?  Yes, the cubs are asleep in the photo and perhaps even drugged to stay that way but isn’t this child endangerment?  You can’t take a child for a ride in the car without being placed in a child safety seat but you can place them down between two tiger cubs?  This type of activity is not good for the cubs and is not good for the baby.

Please do not pay to play with or have your photo taken with cubs. No matter how cute, no matter what the owner tells you.  This activity is not good for the cub,  does not further big cat conservation efforts and sends the wrong message.

Thank you for caring about all cats big and small.

Previous Post: « Why Environment is Important to Your Cat’s Health
Next Post: Cat Power Tower Scratcher and Extra Carousel Giveaway! »