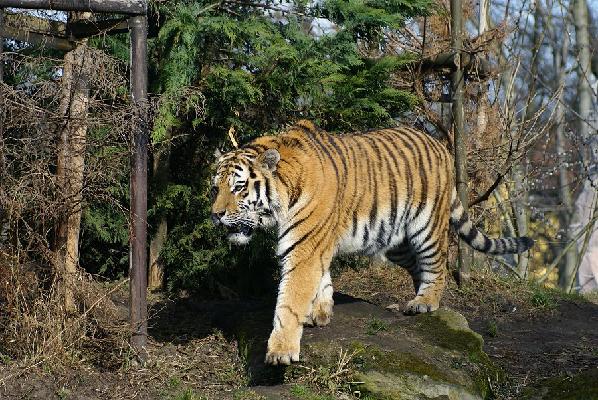 A group of Indonesian men spent four days trapped in a tree while  Sumatran tigers paced in circles around the tree.  The men were hunting

for rare wood used to make incense but this is not  what provoked the tigers. These men accidentally killed a tiger cub in a trap set to catch antelope and deer for food.  The tigers were relentless seeking revenge killing a sixth man and waiting for the remaining five to come down from the tree.

A team of  30 rescuers, including police and soldiers, dispatched to help the men deep in the jungle in the north of Sumatra arrived to find the critically endangered tigers still circling the tree.  This team did not dare approach, but called in three local animal tamers.   Eventually the tigers left the tree and the men were rescued.

This took place in Sumatra, home of the Sumatran tiger, where cases of animal-human conflict are increasing due to extensive logging chewing up the big cats’ natural habitat.  The Sumatran tiger is the world’s smallest tiger and the team of 30 rescuers would not approach the tigers without an additional team of animal trainers skilled at diverting the tigers’ attention. And this happened in Sumatra, where both the tigers and the first responders live.

First Responders Bear the Burden of  the Big Cat Crisis in the United States Too.

First responders bear the burden of the big cat crisis in the United States too but this country is not home to wild tigers. There are an estimated 10,000- 20,000 big cats kept as pets in backyards, basements and roadside zoos throughout the United States. Sadly, the U.S. is thought to be home to more captive tigers than are found in the wild. Exact numbers are not known so there is no way of knowing how many big cats are being kept in private hands and under what conditions. 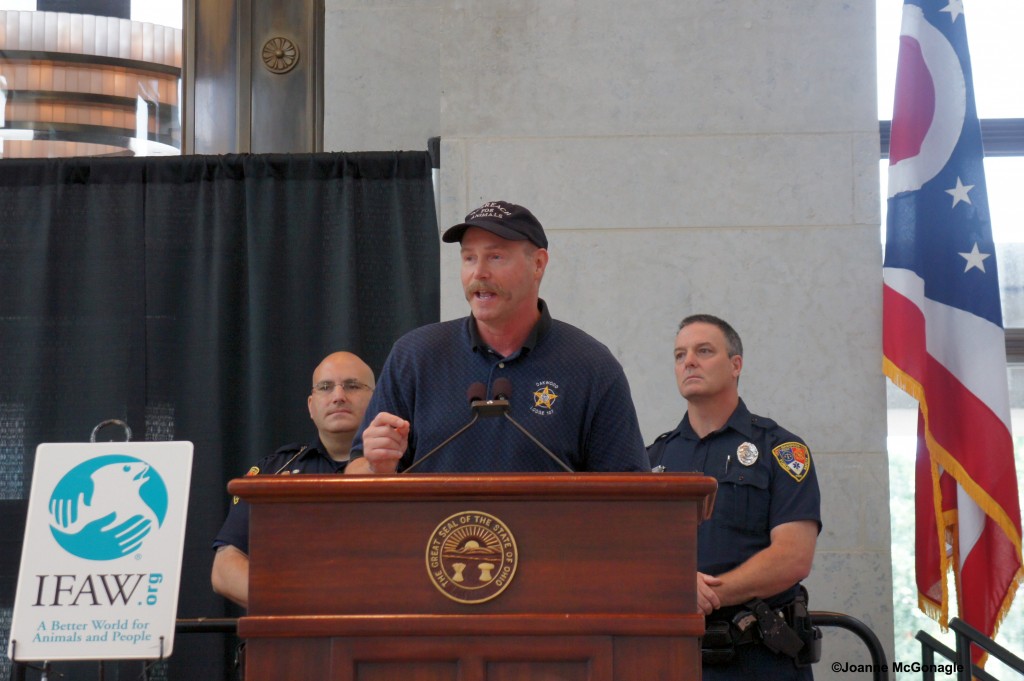 Last week I attended the first-ever first responder forum for big cats  at the Ohio Statehouse Building in Columbus. The event sponsored by the International Fund for Animal Welfare (IFAW)  kicked off the national rally call to police officers, veterinarians, firefighters, EMTs, emergency and natural disaster management and other first responders.  The goal was to build a national coalition of first responders who support the Big Cats and Public Safety Protection Act. (H.R. 1998).

These professionals must risk their lives responding to a person killed or mauled by a big cat or when a big cat escapes.  According to Tim Harrison, Director of Outreach for Animals and a retired Police Officer, Firefighter and EMT:

There are no police or fire academies in the USA that train public safety officers to respond or handle a big cat incident. As history has shown, 100% of all big cat escaper or attacks on humans, the local police and  fire are the first to respond.

In late 2011, when private big cat owner Terry Thompson let loose the 38 big cats and other exotics he kept on a farm in Muskingum County, it was up to me to determine what to do. In order to protect my community, I had to make the difficult decisions to shoot the animals so they couldn’t harm people. This decision, although the right one, brought major adversity to my office and my community. It also placed a heavy burden on our Deputies some which still carry that today.

Law enforcement and other first responders don’t go through training for this, and taxpayers pay the cost when big cats escape or otherwise jeopardize the community. We have a lot of hunters on our agency, but you’re never trained to shoot exotic animals and have to deal with situations like this. Some of our Deputies took quite some time to cope with the situation they were put in. There was also an extra $8,000 cost to our agency due to the overtime  that was needed t0 cover this situation

Ohio’s Dangerous Wild Animals Act  passed las year was a first step but now a nationwide policy on private possession of big cats is in order to take the burden off of the nation’s first responders.  These brave men and women did not become first responders because they wanted to chase down an African lion on an Ohio freeway or be called in to kill tigers on a farm.

An amendment to the Captive Wildlife Safety Act to generally end private possession and breeding of lions, tigers, leopards, snow leopards, clouded leopards, cheetahs, jaguars and cougars, as well as any hybrid of these species.

A grandfather provision for current big cat owners that allows individuals to continue keeping their animals as long as they register them with the USDA within a year after the bill becomes law.

Exceptions for the following: Zoos accredited by the Association of Zoos and Aquariums (AZA) or certified related facilities that coordinate with an AZA Species Survival Plan for breeding of species listed as threatened or endangered; wildlife sanctuaries that do not breed or allow public handling of the animals; wildlife rehabilitators;  state colleges and universities; and select traveling circuses in compliance with the Animal Welfare Act.

Penalties for violations: Violators of the law could have their animals confiscated, along with any equipment used in violation, and could face fines up to $20,000 and up to five years in jail.

What do you think about the Big Cats and Public Safety Protection Act?