Friends, Please give a warm welcome to Pat, the  feline behind the creation of the  Cat Power Tower.

GRACEY: Pat, first I want to welcome you to our Conservation Cub Club. I am truly honored to be interviewing  a creative genius. Not only are you the Chief Feline Officer at Cat Power Tower, weren’t you also instrumental in the design of the Cat Power Tower (CPT)?

PAT: The honor is mine Gracey. Yes, I had a paw in the creation of the Cat Power Tower. I started out as product inspirer, and then moved up to product tester. Now I’m actually the company’s CEC (Chief Executive Cat), but I think I like Chief Feline Officer (CFO) better! It sounds more feminine and with my name being Pat, I’ve been mistaken as a boy by some of my Facebook friends.

GRACEY: Oh, I like that term  product inspirer!  I thought you had to be involved, because only a feline mind could create such a fantastic cat entertainment center. Ask your dad if you can have both the CEC (Chief Executive Cat) and the CFO (Chief Feline Officer) titles at Wiser Pet Products. That way you won’t be giving up any power!  What first inspired you to create the Cat Power Tower?

PAT: In November of ’08, my bird friends were heading south for the winter and I missed them. So one Saturday I put my paws up on my favorite window sill, turned my head and looked at Dad with that sad, tilted head look that we all know so well. He got the message that I wanted something to provide me with year round bird activity.

GRACEY: HAHAHA! Yes, I know that look too. It works every time on my dad too.  I love the Cat Power Tower.  I like to lounge on the Hunting Hole Platform. My parents hide toys and some treats for me to find during the 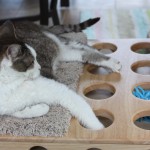 Gracey on the Hunting Hole Platform

day.  I have to admit it keeps me from getting bored during the day.  What do you like to hunt for in Hunting Hole Platform?

PAT: That’s a tough one. I love hunting for those real looking mice but treats are a real weakness for me. I’ll have to say treats.

GRACEY: Oh yes.  I also like those real looking mice.  The Power Post with the Bird Carousal is my favorite.  I like to watch the birds go round and round. Sometimes they mesmerize me. Sometimes I like to just lie down and watch them too.  How about you? 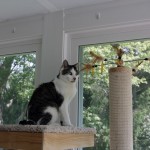 Watching the "birds" from the Lounging Platform

PAT: One of my favorite lounging positions is flat on my back with my paws in the air. So I like to just watch them on my back and wave at them with my front paws.

GRACEY: I am going to try that too.  The Cat Power Tower is big enough to share with Friends too.  I share mine with Lazy Leopard. Do you share your tower too? 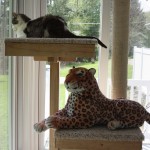 PAT: I love the pictures I’ve seen of you and Lazy Leopard on the Cat Power Tower. I’m an only cat but I think I’m going to mention to mom and dad that I could use a friend like Lazy Leopard. I think there are a few people out there who don’t realize how big and heavy the Cat Power Tower is and a few people are concerned about its stability. Maybe that’s because it looks so sleek. Have you and Lazy Leopard found your CPT to be stable?

GRACEY: Oh my yes!  The CPT is very stable.  It is quite sturdy and substantial. I can’t even imagine what a cat would have to do to move the CPT. Honest, Pat. That was one of the things my mom and dad commented on when they first placed the CPT in the sunroom. They both loved that they didn’t have to worry about me tipping or even rocking the CPT.

This is the first perch where  I could  survey the entire back yard. I really like that the Lounging Platform is 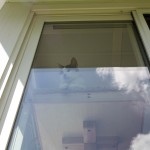 large enough for me to take a nap without my parents worrying about me falling off.  Sometimes I watch the backyard from the top and Lazy Leopard watches from the Play Platform.  How did think to create the Play Platform? Isn’t the Cat Power Tower the only cat tower with this type of option?

PAT: As I mentioned previously, back in November ’08, I gave dad the message that I wanted a toy that could replace my bird friends and keep me busy. He built me a toy that was the predecessor to the CPT. It was just a wood platform that sat on the floor with a scratching post and motorized carousel. Dad gave it to me for Christmas that year. I don’t want to sound unappreciative, but I had to point out some issues to dad with that first Play Platform that I thought should be corrected. 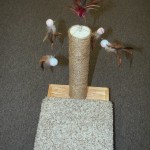 The beginning of the CPT

He glued the scratching post to the platform. I guess he wasn’t thinking about ever needing to replace it or having the option of swapping out different power toys. He also made the scratching post too short and the carousel only turned at 3 rpm. After I convinced him to fix these issues, I also suggested that he incorporate the Play Platform into a nice piece of furniture so we cats could play from the heights we enjoy. So that is how our tower ended up with a Play Platform and I’m pretty sure it is the only cat furniture that has such a thing.

GRACEY: Well, your dad is sure a good listener because he incorporated all of your suggestions into the CPT. My parents didn’t have any trouble assembling the Cat Power Tower.  And my mom comments on the beautiful wood.  The directions were easy to understand and if I had thumbs, I am sure I could have helped too.  Did you write the instructions?

PAT: I’ve got that thumb issue too so I couldn’t write the instructions. I’m really glad your mom likes the wood. Dad didn’t want to create another carpeted “fur magnet”, as he calls most cat furniture. A long time ago dad bought my sister “Little One” a piece of cat furniture for Christmas when he was dating my mom. It was one of those kitty condo things; a cardboard tube with a couple of holes in it and covered with carpet. He told me he kind of felt ripped off paying $50 for cardboard and carpet. That’s why we decided to make real furniture for us cats and their parents.

GRACEY: Do you know that since my Cat Power Tower arrived, that I have not been scolded for scratching the sofa?

PAT: That’s fantastic Gracey! I told dad to make sure to have lots of scratching surfaces on the CPT.

GRACEY: Congratulations on being the Gold Medal Winner of the “Retailer Select Award for Product Excellence” 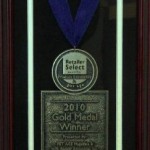 by Pet Age Magazine. It seems Lazy Leopard and I are not the only ones that are thrilled with the Cat Power Tower.

PAT: That was quite a surprise. After mom and dad set up our little 10’ booth at the  H.H. Backer’s 44th Annual Pet Industry Christmas Trade Show, they called me and told me not to get my hopes up. When I got the call from them that we won, I had such a good feeling it’s hard to describe. I get the same feeling now when dad shares customers’ nice emails with me. Dad tells me to always be humble and appreciative when people have nice things to say, but not to have a “Sally Field” moment. I’m not sure what he means by that.

GRACEY: Hmmm. I am not certain. Is Sally a Field mouse? Did he mean not to play with a Field Mouse at the moment?  I don’t know.  Do you have new ideas in the works for the CPT? Or can you tell us?

PAT: Well, as you know we have that second power jack on the Play Platform. We have three more power toys that have passed their prototype tests. You also probably noticed we have a couple unused threaded inserts on the top Lounging Platform’s side. We want to make a bracket that will attach to the side of that platform that will hold plant pots for cat grass and/or catnip. We also want to introduce different top options for the Lounging Platform. Customers have suggested a hammock option, which we had been planning on offering. A sisal covered add on ramp may also be coming for very young cats and very old cats or cats with disabilities.

The comments that make me the saddest are from people who say they really want a CPT for their kitties, but it is too expensive or too big for their circumstance. So we want to introduce smaller and less expensive versions as quickly as we can. If you look at your CPT you can see that you can make a 2-tier version by simply removing the 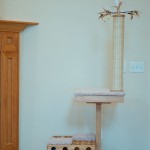 Lounging Platform and pedestal. Then just remove the long lower crossbar and replace it under the Play Platform with the short lower crossbar that would be removed from the Lounging Platform and pedestal. Dad’s design makes expanding and customizing the CPT a snap. We’ve got a 6-tier version set up in the office and it’s made entirely from the same parts as are used in the 3-tier tower. 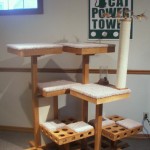 GRACEY: Oh, I think the sisal ramp is a super idea! I wonder if my dad would let me put the new fig tree on the CPT? And a hammock too. Lazy Leopard would really be lazy wouldn’t he?  Hahahaha.

That is wonderful that you are working on smaller versions for smaller habitats. Our Friends really have great ideas and suggestions.

Pat, in appreciation of the Cat Power Tower, Lazy Leopard and I have made a movie for you called “Cat Power Tower”.  We hope you will like our Triple T Studios production.

PAT: I can’t say enough about how much I like your production! You must have worked very hard on that. I showed it to all of my mom’s family at our Memorial Day cookout. They loved it too!

GRACEY: I am so happy that everyone likes the video.  Let’s watch together.  Thank you again for speaking with me today.  Friends, if you would like more information check out Pat’s website and Facebook page.

We were given a Cat Power Tower by Wiser Pet Products to try out in our habitat.  All opinions are our own from our personal experience with the Cat Power Tower.

Previous Post: « How is dry kibble made? Iams & Eukanuba Behind the Paw
Next Post: I Need Your Help to Win a Pettie for Best Cat Blog »