Annie and Eddie are waiting for Santa 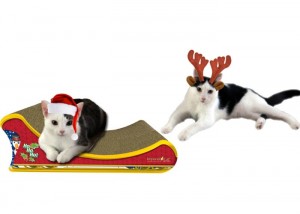 Reindeer are popular during the Christmas season. We see them in movies, in Christmas displays, on holiday greeting cards and of course pulling Santa’s sleigh.  But in northern Scandinavia, reindeer are a part of everyday life for the Sami people of Lapland. Lapland is the Arctic homeland of the indigenous Sami people of Norway, Sweden, Finland and northwest Russia.

Since it is Annie and Eddie’s first Christmas Eve and they are anxiously waiting for Santa, even though Annie’s naughty tally might total more than her nice, we thought it would be fun to talk to the kittens about a few interesting things about reindeer. 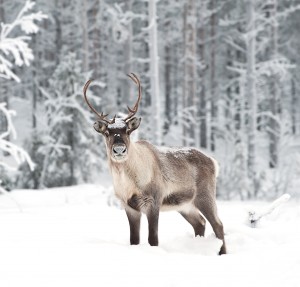 Reindeer can’t fly but they can run quite fast over long distances, up to 30 miles a day if they need to.  They are migratory animals that will roam 125 miles or more in the spring from their winter grazing area in the forest to the high grounds in the mountains,

Reindeer are uniquely adapted for survival in the harsh Lapland winters.

Reindeer eyes change color between summer and winter to adapt to the differing levels of light in the high north.  Due to extremely limited light in the far northern winter, a reindeer’s eyes need to be far more sensitive to light than in the summer. Their eyes change from a yellow-green in summer to a deep blue in the winter. The blue color helps to scatter more incoming light resulting in better vision during the darkest months of the year.

The hair of the reindeer is hollow, making them super insulated. Not only is there air between the hairs but also inside the hair making for a super thick winter coat.

Reindeer also have large hooves as compared to moose or deer. When the snow is deep, reindeer are able to spread their hooves to make them even wider stopping themselves from sinking down into the snow.

Rudolph the Red Nosed Reindeer leads Santa’s Sleigh according to American writer Robert L. May but some of this story is grounded in truth. Migrating reindeer herds are generally led by a single animal.

Who said reindeer really know how to fly?

There is some discussion about the origin of  reindeer really knowing how to fly.  One theory is that because reindeer eat hallucinogenic mushrooms and ancient Sami shaman would then drink filtered reindeer urine and get themselves high, they might have thought they were seeing their reindeer flying.  This theory is rejected by Hakan Rydving, an expert in Sami religion at Norway’s University of Bergen, stating “There is no such information at all from the Sami world, neither about drinking the urine of reindeer, nor of seeing flying reindeer in their dreams.”

I had the good fortune to spend a little over a year in Norway and I have to say that I loved every moment of it, including the midnight sun and the long dark winter.  It was a great experience and I had wonderful quad-mates in my dorm in Trondheim.  I am able to stay in touch with them today on facebook and that is one of the things I like the most about social media.  We can stay in touch with our friends much easier than we could in the past.

Even though I spent the winter in Trondheim, I wasn’t far enough north to see reindeer  and way too far south to see polar bears because polar bears are only on The Svalbard Islands, located in the Arctic Ocean, halfway between Norway and the North Pole.  There was a job posting for a polar bear spotter in Svalbard this year.  I mentioned it to Paul but he just sort of snorted and rolled his eyes.  Svalbard is still on my bucket list.

Annie, Eddie, Mercy, Paul and I wish you a spirit that stays young at heart and wish that tonight you might find yourself looking out your window at the night sky with just an inkling of  hope that reindeer might really know how to fly. 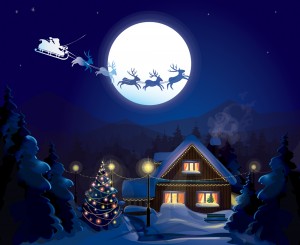 Thank you for being a part of The Tiniest Tiger community and for caring for all animals, big and small.