Small steps can lead up to making a big difference. In my backyard, you might already know that we  try our best to take care of Bossy Backyard Blue Jay and all of the birds that gather and live around our habitat.  We provide food and water, and we have trees and shrubs for shelter. We are also super lucky to have squirrels, rabbits, opossum, white tail deer, the occasional raccoon and last winter there might even have been a bobcat track through our yard. We  live in an area surrounded by neighbors that love wildlife as much as we do.

What isn’t so lucky is the wild tiger.  There are more wild tigers in captivity in the United States than there are in the wild.  Occupying a mere 6% of their original territory, the tiger faces the possibility of following the pug marks of the ghosts of the Balinese, Caspian and Javan subspecies into extinction. The South China subspecies is already extinct in the wild. The remaining, Amur (Siberian), Bengal, Indo-Chinese (including Malayan), and Sumatran subspecies only have an estimated 1000 breeding females in total.

The tiger’s shrinking numbers due to habitat loss, poaching and dwindling prey may  feel overwhelming and to make matters worse, the increasing captive tiger population camouflages the severity of the wild tiger crisis. According to an article The Conservation Value of Tigers: Separating Science from Fiction by Philip Nyhus and Ron Tilson, so many captive tigers may make it hard for the average citizen to fathom that tigers are at risk in the wild. When you see tigers in the circus, at roadside attractions, in small cages in unusual locations, it might be easy to think that there are plenty of tigers. But sadly, there are only an estimated 3500 wild tigers in total in the entire world. With more than 5000 tigers in captivity in the United States alone, you can understand why it is super important for us to take care of wild tigers now!

And the same is true for our big cat cousins, the African lion, which today the only genetically viable populations exist in Protected Areas, a scant 1.1% of their historical continent-wide range.  With only 3500-5000 wild African male  lions remaining, on March 1,2011, an alliance of wildlife protection and conservation groups petitioned the Secretary of the Interior of the United States to list the African lion as an endangered subspecies pursuant to the United States Endangered Species Act. 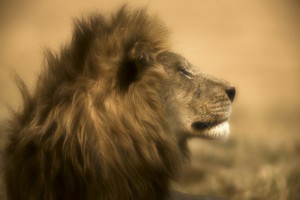 You might not realize this when you see African lions in zoological parks and wildlife reserves.  You might be inclined to assume there are plenty of wild lions  when you are able to see them in captivity.  But this is not the case. According to Panthera, is is estimated there are only 7 countries: Botswana, Ethiopia, Kenya, South Africa, Tanzania, Zambia and Zimbabwe that are home to more than 1000 individual wild lions.

Thank you  for caring for all cats, both big and small and for being my Friend here on The Tiniest Tiger’s Conservation Cub Club where small paws unite to make a big difference!