Richard Turere is a young Maasai boy of 13, whose family lives  on the edge of Nairobi National Park, in Kenya. As is common among the 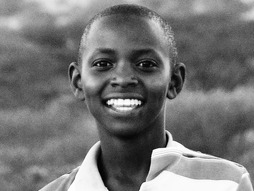 Maasai, Richard took over the responsibility for herding and safeguarding his family’s livestock when he was only 9 years old.  One of the threats to his family’s cattle, sheep and goats is the presence of African lions when they wander out of Nairobi National Park following the path of zebra and other prey animals searching for savannah grasses.

Richard grew up hating lions because at night, lions would sneak in and kill the family’s livestock while the boy was sleeping.  Determined to protect the families valuable livestock, Richard knew he had to think of a way to help him protect his animals from lion attacks.

Richard first built a fire, but realized even though the lions are afraid of fire, they were not afraid to go around the fire and snatch up a meal and in fact their path was made easier by the light of the fire.  Richard then tried to place a scarecrow to fool the lions into thinking that he was guarding his cattle, but this only worked for one night. Richard said, the lions are very clever, so when they returned the second night, they must have realized this scarecrow is not moving and so were no longer intimidated.

Richard then realized that what lions were afraid of is moving light,  as when a person would walk around the stockade with a flashlight. Intrigued by this thought, the young boy came up with an innovative and low-cost system to scare the lions away.  He attached a series of flashing LED bulbs fastened onto poles around the livestock enclosure, with the light facing outward.  These lights were wired to a box with switches and to an old car battery that he powered by a solar panel.  The lights were designed to turn on and off in a random pattern, tricking the lions into thinking that he was moving around carrying a flashlight, even though he was asleep in his bed.

The Lion Lights worked and his family has not lost any livestock to the lions.  The family’s livestock are safe, and the lions are safe from retaliation killings by the Maasai.  Richard’s amazing creativity was recognized with an invitation to the TED 2013 conference that was held in California a few weeks ago.

Hope for the African Lion

I teared up listening to Richard’s talk because in this young Maasai, with the handsome smile and humble delivery, I felt hope for the African lion. There are many days, sadly more days than not of late, that I find myself feeling forlorn and allowing a bit of hopelessness to enter into my thoughts about the future of the iconic big cat . And then I learn about wildlife hero’s like Richard Turere making a difference and I feel that spark of possibility that maybe things can be alright after all.  Perhaps the next generation will take better care and learn to live with and not in conflict with the lions.