Distinctive Lions Will Live Better Lives Thanks to Genetic Testing 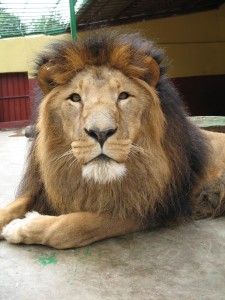 their shoulders and the length of their belly through the groin. These male lions are also smaller in body size than their cousins from eastern and southern Africa.  These distinguishing features  in the Addis Ababa Lions made the biologists think this group of lions are  distinctive, and in fact, made them wonder if they could  be the relatives of an extinct lion subspecies.

It had been speculated that the Addis Ababa lions might be the last pure relatives of North African Barbary lions or South African Cape lions, both subspecies now extinct. Or could these 15 lions be a completely genetically distinctive population of lion?

The lions are descended from a private collection of the last Ethiopian ruler, Emperor Haile Selassie, who captured their ancestors from the wild and brought them to his palaces in the 1940’s.  Today, these lions live in the same holding pens as the first lions captured, only now the  zoo is in poor condition and the lions are lacking proper nutrition, and inadequate space.

Addis Lion zookeepers became so overwhelmed caring for the lions that they reached out to their German “sister city” Leipzig, for help. Vets from the Leipzig zoo traveled to Ethiopia to check the health status of the lions.  While examining the lions, a team of vets took blood samples for genetic investigations  for an international breeding program in case the results confirmed these lions are their own subspecies or perhaps their own genetic construction.

The results from the blood taken from  the fifteen lions descended from Emperor Salassie’s collection, showed  the Addis lions are distinctive, most closely related to lions in Africa, not lion populations in Asia. The analysis showed the existence of three African lion clusters:

Searching around the world for this genetically distinct lion

Scientists are now searching for this genetically distinct lion across Africa and in zoos throughout the world. Genetic testing proved these lions are distinctive and for this reason, the Addis lions will now receive better care including being relocated to a modern facility that is under construction to be finished this year.

Genetic testing enabled these 15 Addis lions to be freed from their small holding pens and to be moved to a new state of the art holding facility with an internationally monitored captive breeding program. But as we know, the lion conservation story doesn’t end here. Given the deterioration of wild habitat due to the ever increasing human population and persecution by humans, one can’t help but wonder if any descendants of the Addis lions will ever be free? 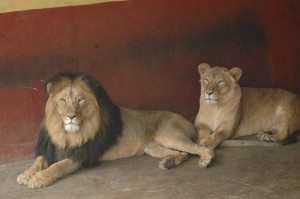 The goal of a breeding program is to conserve the Addis population and its genetic diversity. And just as important, the lives of the 15  individual  Addis Ababa lions will be changed for the better, to live out their days with proper care and nutrition.   We can be grateful that the  Addis Lion Zookeepers reached out for help because this resulted in these lions being able to live happier, healthier lives. We can always hold on to the hope that some day a population of Addis lions will  live in the wild across Africa, healthy and free from harm.

Previous Post: « Win $25 Gift Card to Target from Project Pet Slim Down
Next Post: The Overview Effect How the View from Space Might Save Our World »