Circuses End Performing Lions and Tigers in the United Kingdom 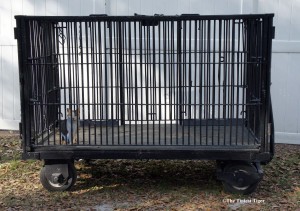 Gracey, The Tiniest Tiger reminding us to not allow big cats to be confined in circus wagons.

Big changes are underway under the Big Top in the United Kingdom.  Traveling circuses have started their season but for the first time no circus will be entertaining the crowd with performing big cats.  The Great British Circus was the last show to feature tigers doing tricks and they sent their cats to an operator in Ireland just in time before the new animal welfare regulations became active last month.

The Victorian era ushered in circuses with performing elephants, lions and tigers on tour.  The last time  the circuses toured  without exotic animals was around 1768 when the first modern circus entertained the spectators with horses and riders performing daring feats.  Wild animals did not debut in the circus until after the British empire expanded in the 19th century.  Wild animals were captured and brought back to be put on display at a time when the average person had little chance of seeing a live lion, tiger or elephant let alone watch them performing tricks.

Over the last couple hundred years, our world is a very different place.  We have access to learning about and seeing lions, tigers and elephants from many sources, whether that be a zoological park, a sanctuary, learning via the internet or nature programs on television.  We also know more about the big cats that share our world and most people are concerned about how they are treated and find physical abuse unacceptable in modern society. 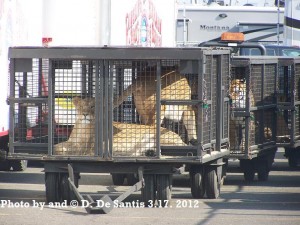 The cages that transport lions and tigers are quite often not big enough to allow the cat to stand up or walk around.  In fact, many animals have been found to be chained in one place while being transported.  Circus owners and operators claim they take good care of their animals, but being confined in small cages all day except when they are performing results in a life without essential physical needs such as sunshine and exercise let alone social freedom. Sadly, every major circus using wild animals has been cited for a violation of the Animal Welfare Act.  These violations only result in a fine imposed upon the circus, not the removal of the animal.

In 2004, a two year old lion named Clyde, a member of the Ringling Bros. Circus died after being contained in a boxcar traveling  from Arizona through the Mojave Desert to California.  The temperature in the cars was recorded at 109 degrees and Clyde was not provided water or ventilation.  This treatment is undeniably extreme cruelty.

The Emotional Side of the Big Cats

A lion would not choose to leap through a ring of fire and a tiger would not willingly sit up on their haunches while balancing on a stool. These big cats must be trained to perform and this training is usually the result of negative reinforcement  in the form of physical abuse. Some animals are deprived of exercise time, food and shelter from the elements when they fail to perform on demand.  Animals are subjected to beatings all across their bodies with sticks, metal rods, hooks and other brutal implements to force them to behave the way the trainer demands.

Big cats suffer pain and many in the scientific community think animals have emotions and feelings as well.  And even if you are  not sure,  isn’t the humane and best path to proceed as though all animals are capable of not only experiencing physical pain but emotional distress too?

“When You Know Better, You Do Better”  Maya Angelou

When I was a child, the circus came to our town and I remember being excited to go and see the elephants and tigers. I remember my mom telling us that she didn’t enjoy the show because of the way the animals were treated.  I didn’t understand when I was younger but I certainly do now.  And as society evolves and we learn more and we know better, don’t we have an obligation to do better?  Knowing what we know now, is there any reason any animal should be forced to perform tricks to entertain crowds?

Circuses in continental Europe and the United States continue to draw big crowds with wild animals. Education and awareness will help these countries follow the footsteps of the UK and allow these animals to escape from the circus and relocate to reputable sanctuaries.

We know better.  Let’s try to do better.

What do you think?