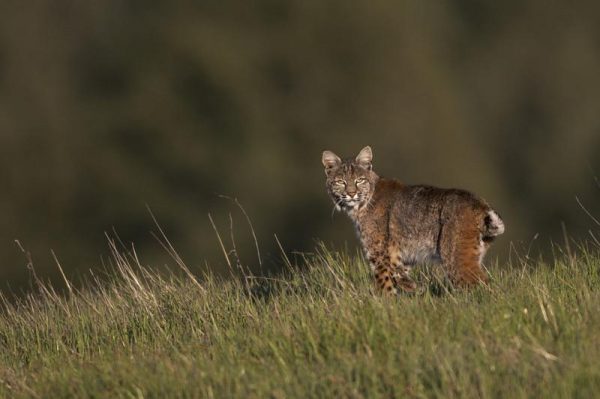 We Live Among Bobcats

We often talk about communities living where African lions, tigers, jaguars and leopards live, and yesterday we talked about living with Mountain lions but we don’t often talk about living among bobcats and other smaller wild cats.   We live in Ohio, where bobcats call the forests of eastern Ohio home. The Ohio Division of Wildlife verified 197 sightings (road-killed, incidentally trapped, photographed, etc.), similar to the previous year (200).  Bobcat sightings are expected to continue to increase in future years as the population increases in abundance and distribution. The large unoccupied forested habitat available in eastern Ohio encourages a growing bobcat population. 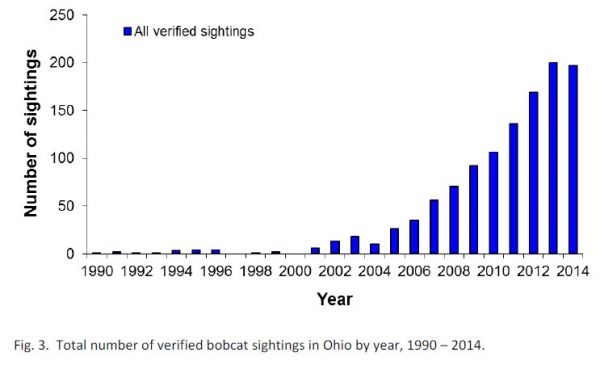 We have had bobcat tracks in our backyard and I have found scat. Paul has been fortunate enough to see bobcats on his way to work on several occasions. Many of my friends and neighbors have seen bobcats live and many more on their camera trap photos. I must admit to being a bit jealous as I have not been lucky enough to see a bobcat yet. 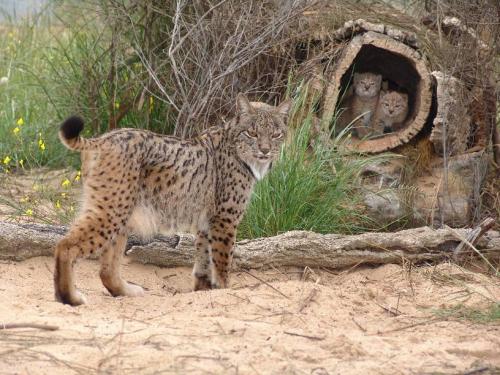 Bobcat kitten in their den while mom stands guard

The bobcat (Lynx rufus) is elusive and nocturnal, so  rarely spotted by humans. Although they are seldom seen, they roam throughout much of North America and adapt well to such diverse habitats as forests, swamps, deserts, and even suburban areas.

Bobcats are roughly twice the size of the average house cat. They have long legs, large paws, and tufted ears similar to those of their larger relative, the Canada lynx. The back of their ears are black with white spots. Most bobcats are brown or brownish red with a white underbelly and short, black-tipped tail. The cat is named for their black tail, which appears to be cut or “bobbed.” As with other cat species, males are heavier and longer than females.

The cat’s distribution ranges from southern Canada, southward through much of the United States, and into Central Mexico. Within this extensive range, bobcats live in a wide variety of habitats such as swamps, boreal coniferous forest, and mixed hardwood forest. Although the bobcat is a habitat generalist, they prefer areas with dense cover or uneven, broken terrain. This preferred terrain provides concealment for escape and privacy, and relief from temperature and wind extremes.

Bobcats share many habitats with other carnivores. Coyotes and pumas are known to occasionally kill bobcats and indirect evidence suggests that these two predators limit bobcat distribution and density. This species is primarily active in the few hours before and after sunset and sunrise. In many parts of its range, the solitary bobcat specializes in hunting rabbits and hares, but will also eat rodents and deer.

This cat is currently classified as Least Concern (LC) by the International Union for Conservation of Nature (IUCN) and protected under appendix I of the Convention on International Trade in Endangered Species (CITES). The main threats to the bobcat are hunting by humans and habitat loss. 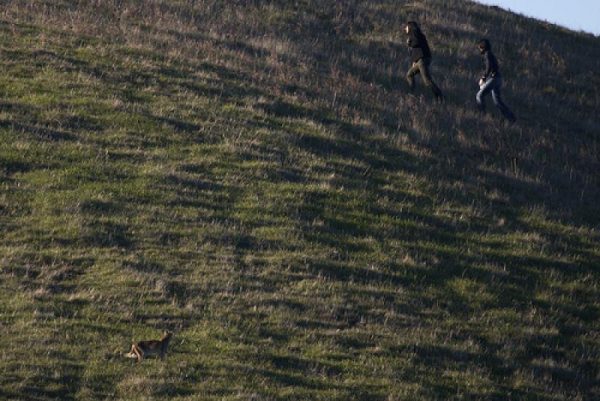 The Bay Area Bobcat Study will look at how human development and habitat fragmentation affects bobcat populations, population status, mortality factors, and health, all of which have not been evaluated in depth for the region. This study will track bobcat movement through fragmented landscapes and identifying barriers that hinder juvenile dispersal within bobcat metapopulations. Combining telemetry and conducting field camera research will reveal where bobcat juveniles are dispersing, and how bobcats are moving on the landscape.

Thanks to your support of Triple T Studios, The Tiniest Tiger community was able to support The Bay Area Bobcat Study.

When you support Triple T Studios, we are able to support global conservation projects.  Fashion with a Passion®

We will be sharing our #GivingTuesday Donations all week.  Thank you for caring for all cats big and small.