When I was young, I imagined Africa as a far off land, with endless savannas and wilderness areas that rivaled outer space.  I  remember lying on the floor in front of the television watching Wild Kingdom,  our window on the world, as we traveled vicariously with Marlin Perkins to the far reaches of the world for exciting interactions with exotic animals in their natural habitats.

A lot has changed since those childhood days of packing a lunch with a friend and telling our parents we were setting out to seek  the source of  the creek that ran through the property surrounding our neighborhood.   This creek seemed endless to us as we walked and talked and used our imagination to pretend we were on safari looking for wildlife.

Our World is Getting Smaller

Now,  I realize how small this creek is and often times, I might even drive by  where we used to play  not giving the water rippling over the stones a second thought. And just as I thought Africa was a mysterious land of abundant space for all animals to live and thrive, we know  this is not the case. Africa’s wilderness is being squeezed as elephants, lions, rhino and wildebeest all compete with humans for habitat and resources.

Today, our world seems a lot smaller than it did when I was younger.  We can visit Africa and watch wildlife right from our homes via Africam and other online sources.  There are television programs on 24 hours, 7 days per week allowing us to see the  day to day life of people and animals on the other side of the globe.  And when you see Africa from the air, you can see the shrinking wild areas and the urban sprawl creeping out into the once wild and open spaces where earth’s animals once lived  in abundance and with minimal human conflict. 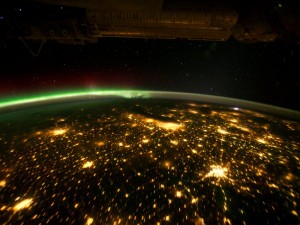 Midwestern cities from space. Photo from The Overview Institute

The Overview Effect, a phrase coined in the book by the same name by author Frank White, refers to the experience of seeing firsthand the reality of the Earth in space, which is immediately viewed as a small fragile planet full of life, hanging in the  abyss, protected and nourished by a paper-thin atmosphere. Astronauts tell us that from space, all national boundaries disappear, the conflicts that divide us seem unimportant and the need to create a planetary society united to protect our world becomes both obvious, imperative and from the Overview perspective, achievable if only more people could have the experience. 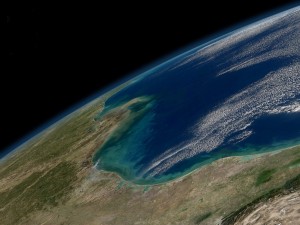 Northern Gulf of Mexico
Photo from The Overview Institute

This view of the earth from space, the whole earth perspective I think is the true symbol of this age.  And I believe what is going to happen is there is going to be a greater and greater interest in communicating this idea because after all it’s key to our survival.  We have to start acting as one species, with one destiny. We are not going to survive if we don’t do that.    Frank White, Author of the Overview Effect 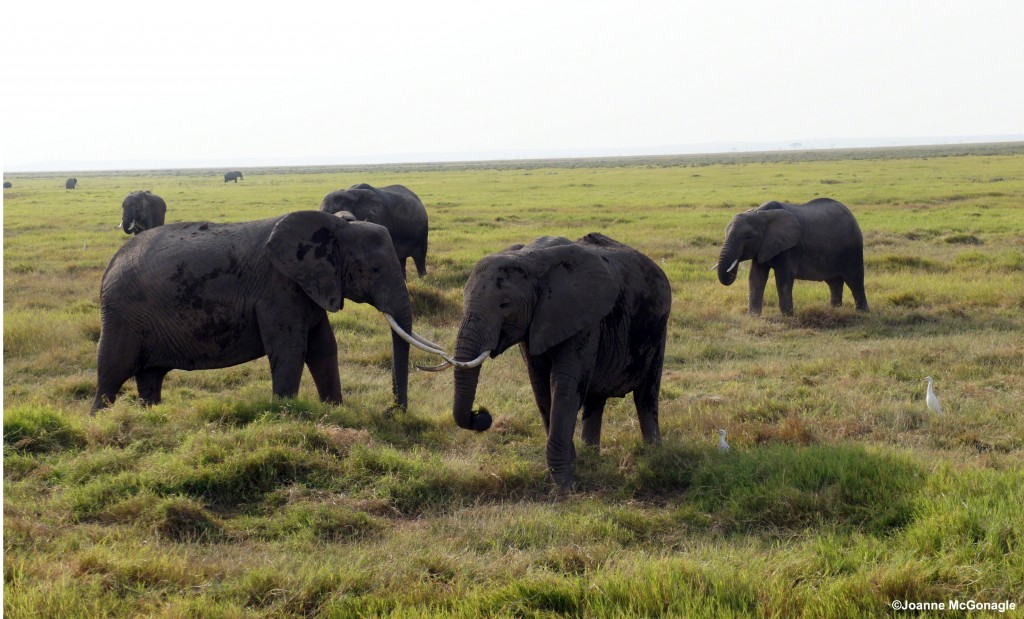 When I was in Kenya, I had my own personal Overview Effect experience.  When we first entered Amboseli National Park, the anticipation of seeing wild elephants was so intense that not one of us was saying a word.  All our eyes were scanning the horizon while our vehicle drove towards the watering hole area of the park.  And then, off in the distance, were beautiful gray shadows  that grew larger as we approached and  we were awestruck in the moment.

From our  ground view, it seemed Amboseli National Park went on without boundaries and just for a moment you might be tricked into thinking these elephants have plenty of space to live and thrive.  But as we kept driving to the top of Observation Hill, the landscape began to change and I saw the elephants  from a different perspective and  began to see the boundaries of this safe haven. I felt a sense of apprehension seeing the end of the park and knowing the dangers lurking for earth’s largest land mammals. 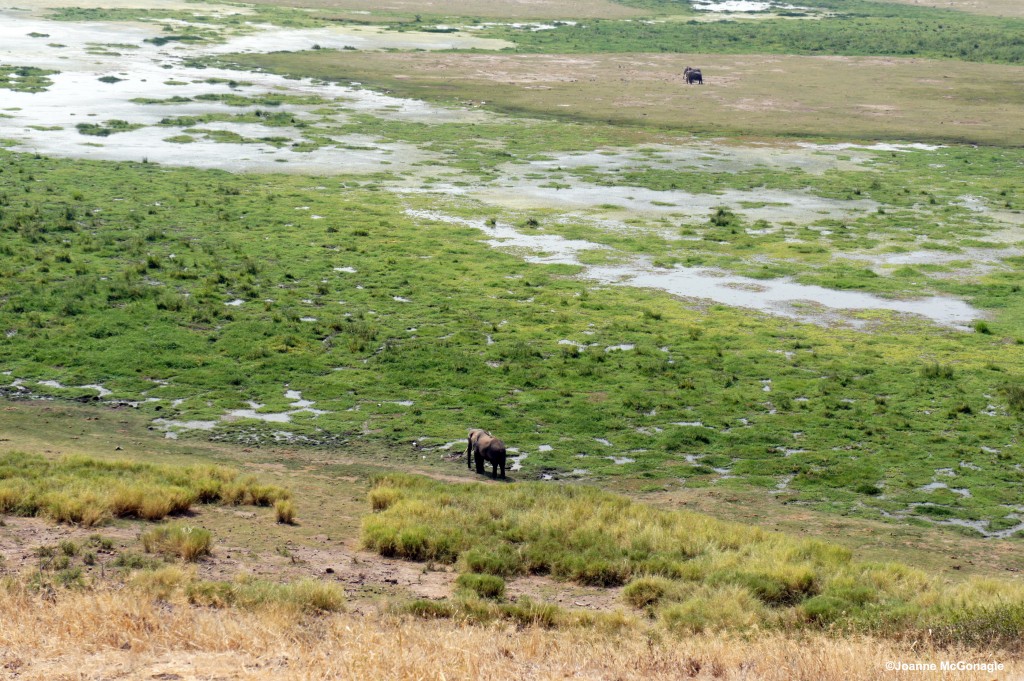 Elephants in Amboseli from Observation Hill.

We had the good fortune to meet  up with David Western, a conservationist that grew up in Africa and the director of the Kenya Wildlife Service from 1994-1998. Western’s philosophy and conservation message is that the current conservation policies based on segregation are destined to fail.  Africa’s wildlife can only survive through coexistence with the African people.

While Western was talking, the view of Amboseli and beyond helped to imprint his message into our minds because the sub-Sahara population  growth shows no sign of slowing down and the wild spaces are shrinking.

On the short drive back towards the small airport where we were scheduled to catch a flight up to Olkiramatian, in the Rift Valley of Kenya, I glanced back at the entrance sign to the park marking the boundary of the protected area.  The problem is, wildlife doesn’t know where the fine line between safety and danger lies. As vast as Africa seemed in my youth, she seemed small and vulnerable during my visit. 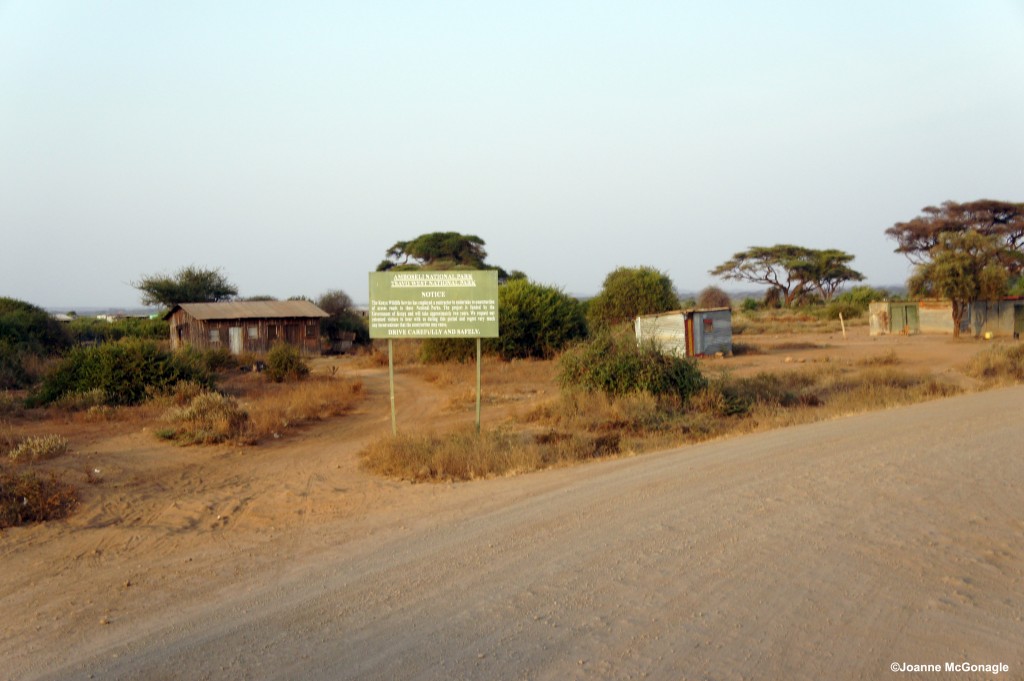 On approach to the airport, we rode in near silence.  This was a lot to absorb in a short amount of time.  We were experiencing sensory overload from the elephants, and zebra sightings to Western’s conservation message, we needed time to process  and remember.

We reached the small airport and waited on the runway for our aircraft to arrive. The cleared path for the landing strip was barely visible to us.  Some of my fellow passengers were visibly nervous at the thought of climbing aboard a prop plane in the middle of what seemed like nowhere. 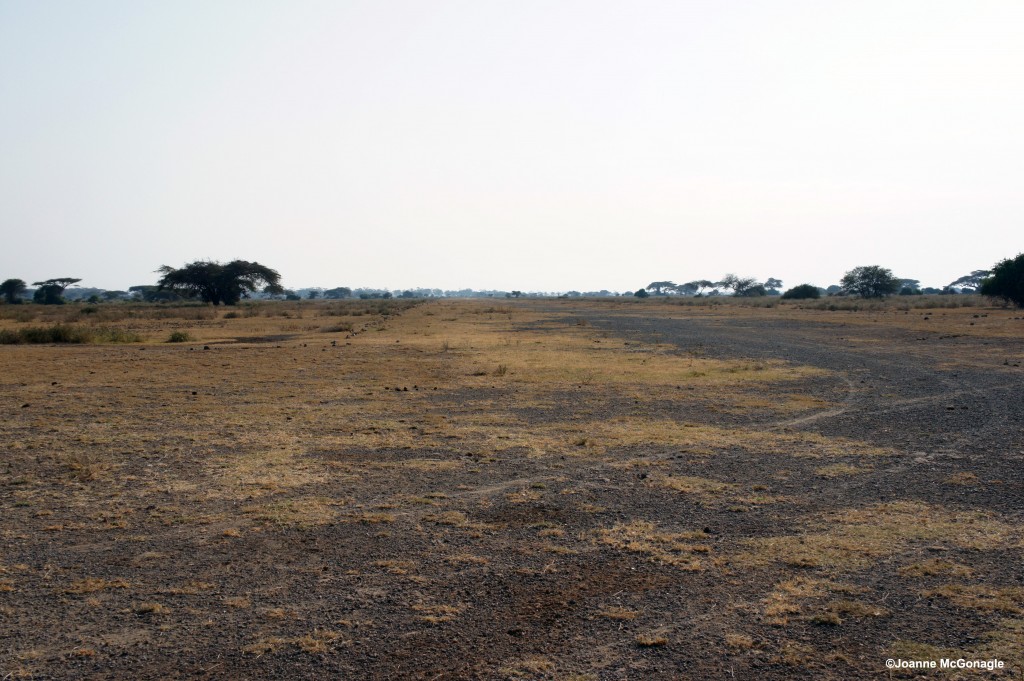 Our planes arrived and we loaded up and we were off the ground in no time.  It was a clear view of the South Rift Valley and as we ascended above the trees, the elephants’ habitat began to look smaller and more vulnerable by the minute. Perspective allowed me to fully see and feel the impact of the diminishing wild places. 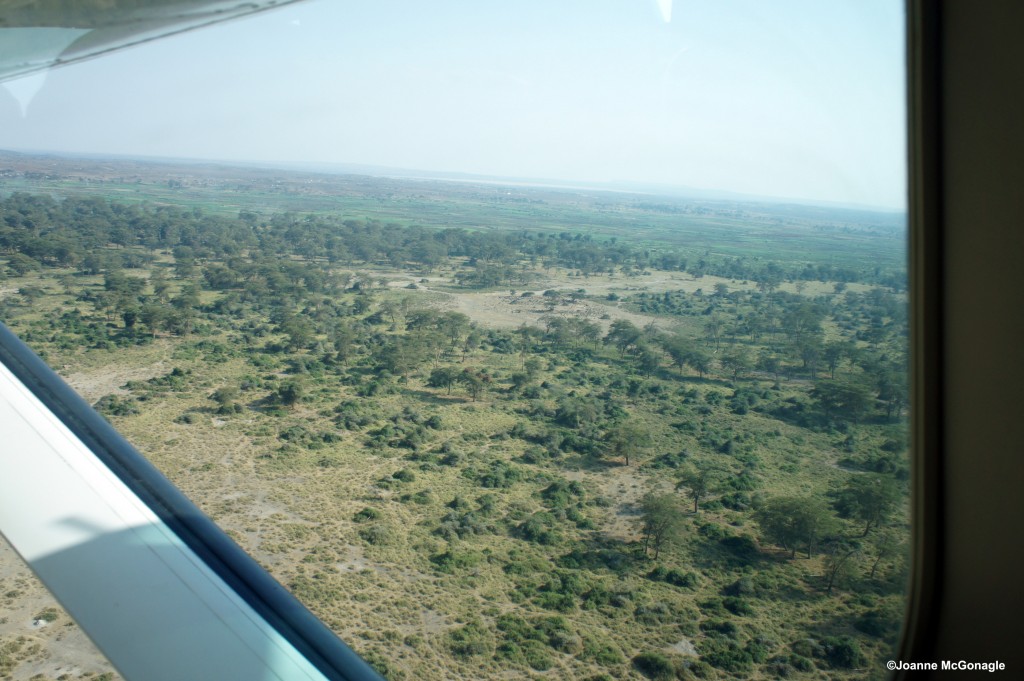 Ascending above the trees in the South Rift Valley

Climbing higher, I could see the roads that cross the landscape as humans encroach into the wilderness. I could see small clusters of homes and towns but didn’t see a lot of water. At cruising altitude, I could see the Rift Valley, looking like a watercolor painting. I thought about my mom and how much she would have loved this experience and I felt blessed to have the good fortune to be living this moment.
This was the highest altitude view that I was able to experience, but it was high enough for me to witness that even Africa is not big enough and we must take care of her for all living beings. The Overview Effect brought tears to my eyes as I thought about how we all live in one ecosystem.  What we do on one side of the earth affects the other side and that is a new way of thinking for most of humanity.  I wish that every person could experience The Overview Effect. This feeling of unity, understanding and urgency to live as one people on our one planet. If everyone could experience The Overview Effect, this view from space might save our world. 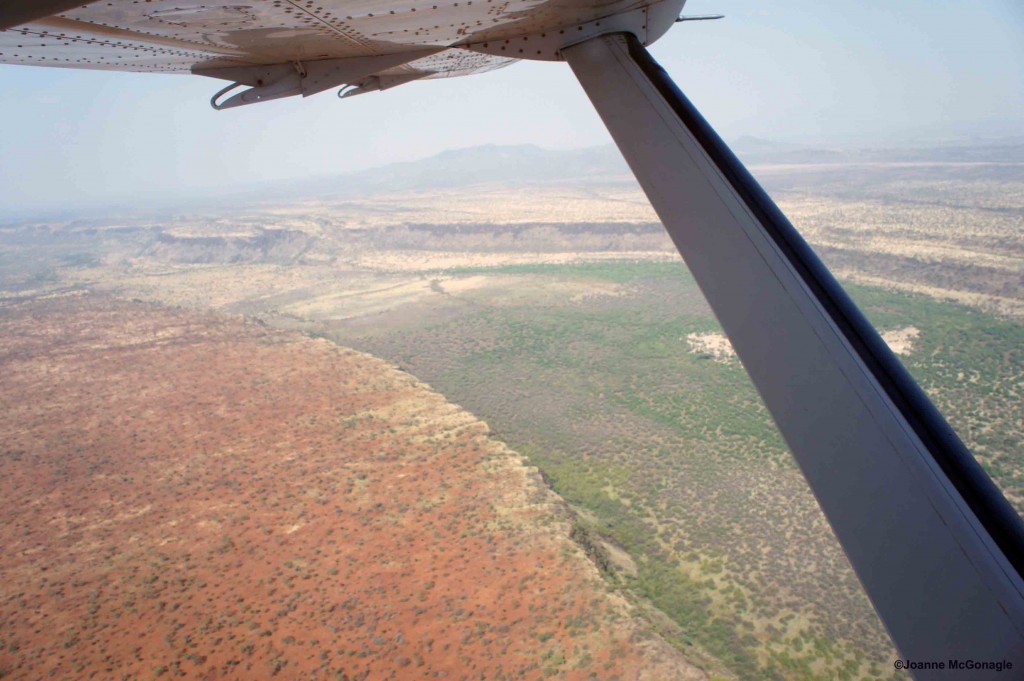 South Rift Valley from the Air

As you go into your mind in a contemplative way, the sense of the living reality of the planet becomes obvious, you become more in tune with the natural world. It is no wonder that many people have likened the Overview Effect to a spiritual or meditative experience although it is not exactly that; it is a cognitive shift that very often can produce a kind of meditative experience.       David Beaver  Co Founder the Overview Institute

We humans are responsible for ourselves, and we are endangering our future.  We have to learn how to do it differently and to go forward into a sustainable period, and right now that seems very difficult to see how that will be. But we have to work on it.   Edgar Mitchell, Apollo Astronaut 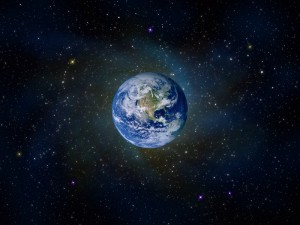 Earth from Space
Photo from The Overview Institute

We are seeing very clearly that if the earth becomes sick, then we become sick.  If the earth dies, then we are going to die. People sense that something is wrong but they’re still struggling to go back and find out the real roots of the problem.  And I think what we need to come to is the realization that it is not just fixing one economic or political system but a basic world view, a basic understanding of who we are that’s at stake.  David Loy, Philosopher

Previous Post: « Lions to Live Better Lives Thanks to Genetic Testing
Next Post: The Most Endangered River in America »