Last year we posted a survey about African lions and asked you to tell us which lion caught your eye and why.  For those of you that participated in the survey, you might remember the short story of Sikiria that was part of the survey question.

Here is the excerpt from the survey:

The Lion Guardians have been extraordinarily successful at stopping lion killing. This program is one of the first in East Africa that combines traditional knowledge with modern scientific techniques.

In order to learn more about the African lion, a radio collar is attached to track each lion’s movement. Once a lion is given a collar, the Lion Guardians give the lion a Maasai name.

The names usually reference either a physical characteristic or a behavior unique to that particular lion. For example, one lion was given the name Sikiria, which means “he of the donkey”. This name was given to  him because he liked to eat donkeys. This name and telling of stories about him helps diffuse the anger and retaliation from the Maasai when Sikiria goes looking for a donkey. Now watchful eyes can keep Sikiria out of trouble and the donkeys safe by relaying messages about Sikiria’s location. It is also much easier to forgive behavior when you know the name of the lion and their unique traits. 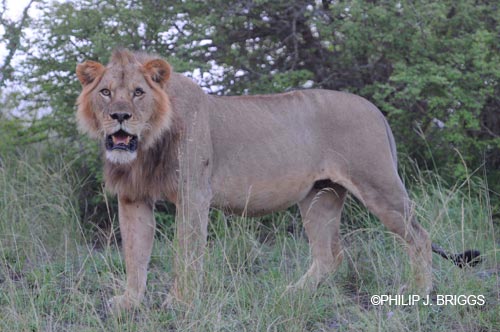 Sikiria "He of the donkeys" Photo by Philip J. Briggs

The Lion Guardians named him “he of the donkeys”

In September 2009, the Lion Guardians received a report about a group of four young male African lions near the Selenkay conservancy. Because they had never heard of such a big group of males traveling together, instructions were given for the lions to be closely followed.  The Lion Guardians caught a glimpse of the four males one afternoon but unfortunately the group decided to go on a killing spree that night. The lions killed seven donkeys as well as several shoats* from one neighboring community.

In the morning the young male lions were hunted by the young Maasai warriors, known as Morans, but due to the combined efforts of the Lion Guardians and the Eselenkei Game Scouts, no Morans were hurt and all four lions lived to see another day.

The next day, the Lion Guardians collared the biggest male and called him Sikiria (meaning he of the donkeys).  Sikiria then disappeared for over four months. Instructions were given to track him down, and even with the support of aerial searches, Sikiria was nowhere to be found.

One day while following up on a report of a male lion named Lomunyak, near the Mbirikani Group Ranch, the Guardians were surprised when they shone their light and saw two lions, Sikiria and his brother Oyayai. Sikira’s GPS collar data show his unusual movement patterns. He had moved through Namanga, spending nearly two weeks up on Namanga Hill, then all the way to Torosei which borders Shompole, went briefly in to Tanzania and back to Eselenkei and over to Mbirikani, and then he moved beyond the Chyulu hills to an area close to Tsavo West National Park, Kuku.  A wide range for any lion.

In early 2011, the lion injured a young Moran that was part of a group hunting him down after he had killed a cow.  Many times Sikiria preyed upon livestock and was the target of the Maasai warriors, but got away without a scratch.

As Sikiria matured his behavior improved and he settled down in a place called Oltiasika.  Sikiria sired more than nine cubs 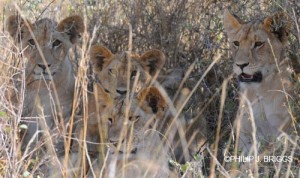 with  six lionesses over the past two years.  His pride is composed of fourteen lions, one of the biggest lion groups the Lion Guardian Project monitors, outside protected areas. Things seemed to be going well for the lion pride.

The end of a lion legend

Just a few days ago, Sikiria, together with his brother and constant companion Oyayai, killed a cow at a place called Elang’ata Enkima on Kuku Group Ranch.  The three Morans that were herding the cows confronted the lions. Oyayai ran from the Morans, but Sikiria stood his ground and waited for them.

Sikiria was speared but the lion seriously injured two of the warriors while the third ran home calling for backup. When the Morans arrived to rescue their fellow tribesmen, Sikiria was speared to death. According to the Maasai tradition, human injuries caused by any wildlife species is unforgivable and revenge is the ultimate response. 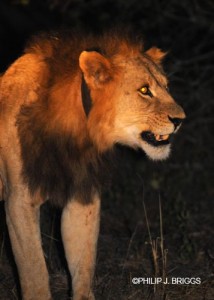 Last photo of Sikiria before his death Photo by Philip J. Briggs

Sikiria had always been a problem lion but the Lion Guardians in conjunction with the Maasailand Preservation Trust game scouts, Maasai Wilderness Conservation Trust and Kenya Wildlife Service –Amboseli, worked to protect him until he met his fate.

According to the final download from his GPS collar, Sikiria had traveled almost 7,000 square kilometers, passing through twenty one of the thirty Lion Guardian zones, making his one of the largest documented ranges outside the desert lions of the Namib.

Sikiria was well known among the Maasai. In fact, a recent survey conducted in Lion Guardian areas showed that over 70% of people in the surveyed areas could name at least one lion and Sikiria was the most frequently named.

Sikiria is an African lion legend and without his guardians, he might not have been able to leave a legacy with his cubs. Without the Lion Guardians, surely Sikiria would have been taken down long before he formed his pride.

The Lion Guardians will miss his unique personality, fortitude, and his handsome face. His death marks the end of a legend, but the beginning of a legacy.

*shoats is a term that the Maasai use to refer to both sheep and goats.