The Super Storm was one of  the worst in North American history!

Fridays are usually one of my favorite days.  But last Friday changed my opinion of Fridays.  Shortly after my dad came home from work he started watching the weather radar on the television. My mom was watching the updates on her iPad and they both kept discussing that the radar looked much worse than what the weathermen were forecasting.

What started off as a chance of thunderstorms became one of the most destructive and deadly fast-moving bands of severe thunderstorms in North American history. Now known as the June 2012 Mid-Atlantic and Midwest  derecho, the storm ripped over the Columbus Ohio area around 5:00 PM, with winds reported to 82 mph and causing severe damage to the power grid and it was heading our way.

I felt my parents getting nervous.  My mom called my name and then scooped me up in her arms.  She carefully put on my 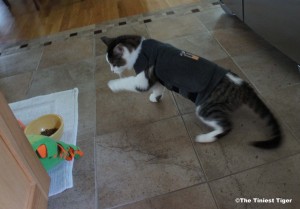 Me in my Thundershirt.

Thundershirt for cats while my dad went to the basement to make sure everything was in order just in case we needed to bolt.  I saw my carrier placed open and ready for me to be tucked inside.

My dad said that we had until 6:15 before the storm would visit us, so my mom said she was going to work a little longer.  But in only a few minutes she came out of the office and said, I think we should shut everything down. I don’t have a good feeling about this storm.  The last time she said that, a tornado took the roof off of our kitchen!  So then my dad started to pace.  I don’t think he was marking his territory but I am pretty sure he was showing signs of stress.

My mom shut down the computer and unplugged nearly everything in the house. Then she picked me back up and the three of us waited.  The wind came 30 minutes earlier than expected and  tree branches  began to snap off and smack up against the house. Lawn chairs, popup tents, and all sorts of summer backyard items were flying by the windows.  Our neighbors giant maple trees were bent over into an impossible yoga position. The power blinked and passed out.

I heard the whir of our generator starting up. My dad really wanted a standby generator but my mom wasn’t convinced.  He can do the told you so dance now for the rest of our days because we were super lucky to have this source of power. My mom was still squeezing me so I squirmed a bit and she let me down to look around to make sure my sun room was alright.

The next days were filled with the roar of chain saws, and as each day passed the din grew as  more neighbors added generators to run their refrigerators and fans.  Big trucks rolled up and down the street with the tree eating machines that make a super loud noise.

Then on Monday, our lights came on and the generator turned off.  And almost before we could put our paws down from saying “Super Hurrah” there was an explosion and our generator started back up because the power went back off. Our neighbors tree was on fire where one of the branches was dangling on the power line. ~sigh~

The workers from American Electric Power (AEP) and Alabama Power worked round the clock under hot and humid conditions to restore power.  They were super nice. One of the Alabama Power workers told us that they might be more thrilled than the home owners when power is restored. He said there is no feeling in the world like when it is pitch black and then they see the sprinkling of lights dispersing across the darkness as power is restored. And of course there is the loud collective shouts of joy from the homeowners too. 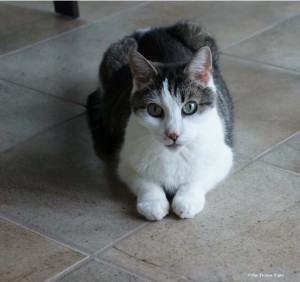 The loudest week of my life

We had a couple more thunderstorms, endured firecrackers and bottle rockets. Then on the 4th of July, a giant truck rolled down the street and we heard the chain saws.  My mom even seemed happy to hear the chain saw this time and she doesn’t like it one bit when trees are taken down. Then the power guys used a long fishing type toy to place something called a blow out back into place on the pole behind our house. And in a few minutes, our generator shut off and we had electricity.

The next morning while I was enjoying the cool morning air through the screen door in the office, I let out a big sigh of relief.  Then out of no where and on the wrong day, the super spooky  garbage truck growled down our street.  I bolted and my mom laughed a bit, and she said, I am sorry Gracey, I think this was the loudest week of your life.

I hope the rest of our summer is quieter.

Previous Post: « Gracey is the Susan Lucci of the Petties! Vote for The Tiniest Tiger
Next Post: Free Tickets to Cats for Cats in LA »