A Symbolic Gesture for a Principle Beyond Money 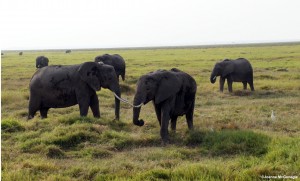 Today the United States government will destroy six tons of ivory, which represents a large portion of the ivory the Unites States has seized since the late 1980’s, when a national ban on commercial African ivory imports went into effect.

Ivory Crush ceremonies have been a litmus test for where  a country stands on the ivory trade ever since Kenyan President Daniel Arap Mio burned 13 tons of ivory in 1989, setting the stage for a vote to ban international trade in ivory by parties to the Convention on International Trade in Endangered Species (CITES).

The ban went into effect in 1990 and the United States ivory market collapsed six months later. But the ban didn’t last. In 1999 and again in 2008 parties to CITES voted to allow ivory sales. The first sale of 55 tons to Japan, and then 115 tons to Japan and China.  After the China sale, elephant poaching and ivory trafficking have soared.

Last year, Gabon burned 4.8 tons of ivory and earlier this year the Philippines became the first non-African country to destroy its ivory stocks when it crushed 5 tons of ivory.Each ivory crush ceremony was an act by a poor country sacrificing a potential asset for principles that go beyond money.

The size and nature of the ivory trafficking problem has been overlooked.  The United States banned the import and export of African ivory in 1989 but it did not ban its domestic sale. So ivory continues to be openly available for sale in luxury shops in New York City, just as it is in San Francisco and other American cities.

The United States ivory trafficking pales in comparison to ivory smuggling to China. US Customs and USFWS inspectors are among the best border patrollers in the world and have only confiscated six tons of ivory since 1989.  In 2011 alone, 46.5 tons of illegal ivory were seized most of it headed for China.

In choosing to destroy its national ivory stock 25 years ago, Kenya took a big risk. Its ivory burn put the country in conflict with its southern neighbors who wanted to expand the ivory trade and it cost Kenya significant potential revenue.

But Kenya made a calculation that tourism for live elephants was more valuable than trinkets from dead ones.

Calling Upon China to Ban the Domestic Sale of Ivory

China’s government is seeking to expand its domestic ivory trade and to import more ivory from AFrica. Law enforcement in Asia and Africa is inadequate to stop ivory trafficking syndicates. So calling upon China and other countries to ban the domestic sale of ivory and join the United States would be an even more meaningful expenditure of American political capital.

We want to send a clear message that the United States will not tolerate ivory trafficking and the toll it is taking on elephant populations, particularly in Africa. The United States believes that it is important to destroy ivory seized as a result of law enforcement investigations and at international ports of entry because elephant poaching in Africa is at its worst in decades and we are committed to protecting elephants from extinction. Destroying this ivory tells criminals who engage in poaching and trafficking that the United States will take all available measures to disrupt and prosecute those who prey on and profit from the deaths of these magnificent animals. –US Fish and Wildlife Service

Don’t miss out on The Tiniest Tiger News :