As the year draws to a close many of us might take time for reflection. It is befitting to think about changes we would like to see for the better when the clock strikes midnight and the clean slate of a new year begins. Out with the old, and in with the new.

These past few months I heard way too many times, sound bites repeated about cats that are stereotypical, unfounded, and cruel.  These same mundane statements are being echoed throughout almost every media outlet and social media venue.  This  repetition does more harm than good and it is frustrating to keep hearing these same old droll statements plunked down because it is easier to repeat than evaluate.

I might sound like I have lost my sense of humor, and I haven’t I assure you, except when it comes to people mindlessly repeating the following things about cats.

1) Stop repeating that cats are aloof and don’t love their humans. 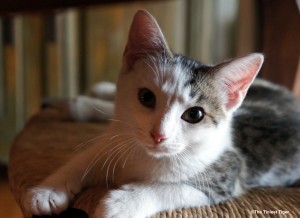 Vocal recognition of owners by domestic cats (Felis catus),  by Saito and Shinozuka and published in Animal Cognition early in 2013 caused an echo throughout the media claiming that cats don’t care enough to respond to their owners, cats are aloof, and even your cat doesn’t love you back.  So as bits and pieces of the article were plucked out and repeated, in one sensational headline after another, the core of the article was left behind.

The result of the study showed that cats are able to use vocal cues alone to distinguish between humans.  You see, the social ability of domestic cats, compared to domestic dogs, has not been studied thoroughly in the context of human interaction. The reason for this might be found in the history of cat domestication and the sociality of their ancestors.

Genetic analyses shows  the ancestors of cats were African wild cats, Felis silvestris, which were solitary animals.  Cats domesticated themselves in ancient times in order to prey on rodents that were around grain storage buildings. Unlike dogs, artificial selection was not conducted consciously and the domestic cat was a product of natural selection.

Over time however, domestic cats have developed different features from their wild ancestors.  Cats sharing their habitats with humans have developed an intraspecies communication not found in other solitary felids. Their meowing is thought to be more pleasant than that of the African wild cats.  Cats are known to show solicitation purring at feeding time as well as non-solicitation purring when relaxing. Just like dogs, domestic cats have the ability to use human pointing as a cue to locate hidden food.  They react to unfamiliar and familiar humans differently.  The results of this study show that the social abilities of domestic cats are not confined to conspecifics alone but are also applicable to humans.

As anyone that loves and shares their life with a cat can tell you, cats do care about us.  Our cats greet us at the door, curl up beside us to sleep, comfort us when we are sad, interact through play and bring joy into our lives.

This article  published results of  a scientific study proving cats are able to use vocal cues alone to distinguish between humans. The sound bite about how a cat, when placed in an unfamiliar place, does not show the same behavior as a dog when the owner returns to the room, means that cats don’t care about their owners has got to be squelched.  A cat is not a dog and the feline behavior should not be compared any more than when a parent returns home and an adolescent youth just grunts but doesn’t  run to the door panting.  Does that mean the child doesn’t love the parent?

Only two human rabies cases were reported in 2010. Over the last decade, just 21 cases of domestically-acquired human rabies have been reported in the United States. (Of the 29 total cases reported from 2001 to 2011, eight of the exposures took place in other countries.) Wildlife accounts for the majority of exposures and make up more than 90% of all reported rabid animals.

While it’s possible for feral cats to become infected with rabies, feral cat colonies themselves do not  serve as a source of the disease. Rabies is caused by a virus that exists in several different variants, some of which are specially adapted to specific animal species. For example, dogs can develop canine rabies, and this canine rabies variant can thrive in unvaccinated dog populations, which in turn may serve as an ongoing source of rabies in a community. But rabies has never developed a specific feline variant, and thus cats are merely incidental victims, according to Julie Levy, DVM, PhD, at the University of Florida in Gainesville.

Roberta Lillich, DVM, president of the American Association of Feline Practitioners, explains that cat behavior may be why rabies is relatively uncommon in felines. Skunks and raccoons are major sources of rabies, and most cats  faced with a challenge by a skunk or raccoon will run away, whereas a dog is more likely to attack. When faced with non-prey animals cats are typically  defensive animals rather than offensive animals. The small rodents such as squirrels, chipmunks, rats, mice, and rabbits that feral cats may hunt are rarely infected with rabies. Feral cat colonies managed with Trap-Neuter-Return programs do not harbor rabies, because the vaccinations they receive as part of the program are proven to protect them from the disease for multiple years.

3) Stop repeating that women who love cats are mentally deranged.

According to the dictionary the word crazy can also mean passionate about, as well as harebrained, half-baked, and ridiculous.  While thinking about this, I ran across a note about the term batty in the  dictionary on my iMac.  According to this dictionary, the term batty invokes a gentle sweetness.  The dictionary note gives the example of an elderly woman working harmlessly about the garden, hair coming undone every which way, talking to herself, or the plants or the birds, oblivious to creatures of the human persuasion.  Batty is closer to eccentric or deeply peculiar, than the harsher term nuts, wacko, or bonkers…. or crazy.  Again, a woman is used to define batty even if it is a kinder gentler term. Why?

When the term  crazy is echoed through the media, it is not meant to imply passionate about cats. It is not used as a positive adjective.  It is used for SEO purposes and for sensational headlines. It just flows off the tongue because it has been repeated and regurgitated so many times that it is used without thinking.

It is time to stop using this term.