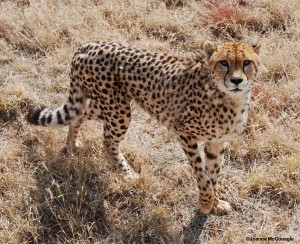 Cheetahs might be the fastest land animal but a new study reveals it isn’t speed but extreme agility and maneuverability that’s key to bringing down their prey.  A team from the Royal Veterinary College, UK, working with the Botswana Predator Conservation Trust,  used custom-built tracking collars containing GPS and inertial measurement units to capture the locomotor dynamics of cheetahs hunting in the wild.

In the 1960’s cheetahs were clocked reaching speeds of 64 miles per hour, but research using modern technology shows the cheetah’s speed at 40 mph. These studies were carried out with captive cheetahs and could give little insight into how a cheetah uses their speed in the wild. So researchers collared five wild cheetahs and tracked their movement. These sophisticated collars are capable of of monitoring speed, acceleration, deceleration and location. Data was collected for 367 runs over 17 months.

Cheetahs Rely on Agility and Maneuverability

The surprising results showed that agility and maneuverability were more important than speed during a hunt. Cheetahs are capable of very high speeds, Ferrari, was clocked at 58mph, but the average top speed taken was 33mph, and even this was only maintained for a few seconds. Speed didn’t seem to make a difference between successful and failed hunts.
What the data did show was that cheetahs are champions of rapid acceleration and deceleration. These cats can speed up or slow down by 9mph in a single stride. Their muscle power output per kilogram (100 watts) during acceleration is the highest of any land animal. (Six time Olympic gold medalist Usain Bolt can produce 25 watts.) Speeding up and slowing down rapidly proved more important in catching prey than just speed alone. 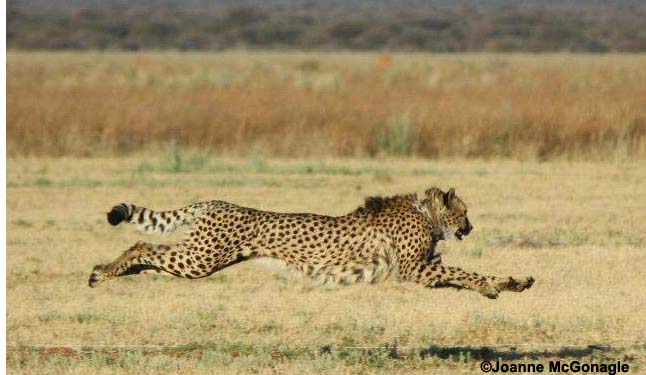 Traditional thought has been that cheetahs hunt at dawn and and prefer to stay within open grasslands. 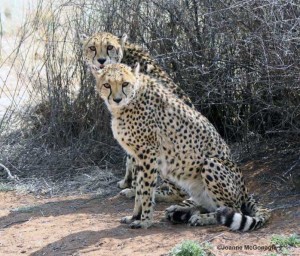 Out of the 367 data runs, 94 resulted in the cheetahs capturing their prey, a success rate of about 26 percent. This new study showed that cheetahs hunted during the day too.  Although half of the runs occurred in open grasslands, 28 percent were carried out around large trees and 24 percent happened in thick vegetation cover. Trees and shrubs might offer cheetahs a better way to stalk prey, but this new research did not find significant differences in the speed or distances run across the various terrains.

Earlier this year we wrote an article, Male and Female African Lions Hunt Using Different Strategy that discussed how it had been  thought that male lions did not hunt, but rather were dependent on the lioness’s hunting prowess to sustain the pride until a study  recently published in the March 2013 issue of Animal Behaviour discussed how researchers used airborne  Light Detection and Ranging (LDAR) measurements of vegetation  structure in Kruger National Park, and combined a global positioning system (GPS) telemetry data on lion kills to quantify lines-of-sight where lion kills occurred as compared to where lions rested. What they found was significant differences in use of vegetation structure by male and female lions during hunts.

Technology is helping researchers understand big cat behavior. The better we understand them, the more focused efforts can be to help save them.

Previous Post: « Compare and Contrast How The Tiniest Tiger Began
Next Post: Cheetah Love Our Message to Gracey after Four Weeks »