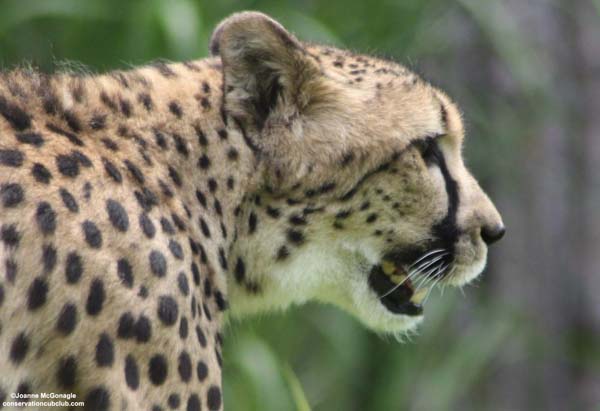 Meeting Savannah at the Cincinnati Zoo 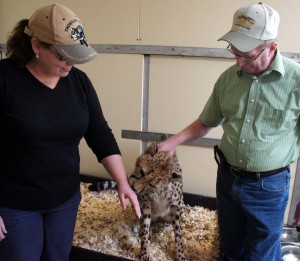 When our friend Linda Castenada heard the news that we had lost you, she quickly sent a message telling us she was heartbroken and extended an invitation to come visit her at The Cincinnati Zoo for some cheetah love. Linda runs the Cheetah Encounter and this past year, she has been raising a beautiful cheetah cub named Savannah. This was such a sweet and thoughtful gesture.  Your dad and I were really touched and thought this would be a fun and interesting thing for us to do together.   Linda and I were in Kenya together while you and your dad were here taking care of everything at home. 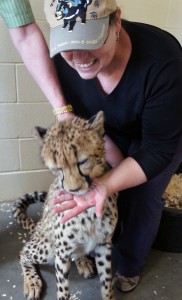 After the show, Linda met your dad and I and we were given a behind the scenes tour.   We stayed safely behind the yellow line and the front of the cheetah enclosures and were able to meet Sarah, Chance, and Bravo.  I forgot that your dad had never been this close to a big cat before and he was fascinated with just how loud cheetahs can purr.  We learned all about the love and care that goes into their daily diet and enrichment programs.

Then Linda introduced us to Savannah.  I have to tell you that your dad’s eyes were as big as saucers.  He was trying to pretend to be calm and collected but being up close to a big cat, even if it is a young cheetah, can be daunting.  They are long, lean and strong. And Savannah stayed alert, keeping a close eye on us. Your dad was trying to be brave, but I could tell when he reached out to pet her, he wasn’t sure if he really wanted to.

Savannah kept licking my arm.  And I have to tell you, it started to hurt a little bit.  You little guys have rough sand paper tongues and the big cats have 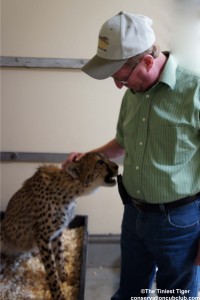 even bigger and rougher tongues. Their tongues are designed to help lick flesh off of bone.  My arm was getting red and roughed up but I didn’t mind too much.  Your  dad was content to give her a few scratches behind the ears.

Then Savannah became fascinated with your dad’s cell phone case. She inspected it and left a little tooth mark in the case as a souvenir.  You would have been proud of him, because he was very brave by then and  began to pet Savannah.  This was a great experience for your dad and for me too, but I was super happy that your dad was able to experience meeting this amazing cheetah.

I’ve been fortunate having amazing experiences in Kenya and Namibia as well as at the Cincinnati and Columbus Zoos.  My zoology studies gave me the luxury of being able to spend hours reading, observing and  writing about big cats. I got to spend time with cheetahs at The Cheetah Conservation Fund in Namibia and track lions in Kenya  and all of this started with you.  You came into my life and I was changed for the better.

On the drive home, I remembered watching the video Cheetahs on the Edge-the Directors Cut.  I was holding you on my lap and we were  mesmerized watching the slow motion video of the cheetahs running. Their movement is so fluid.  The music Be Dark Night by Phosphorescent is haunting. You can’t help but appreciate if not fall in love with the cheetah watching this seven minute film.

So this is for you Gracey, our amazing little cat.  Your parents are doing a bit better.  We love you.

Cheetahs on the Edge- the Director’s Cut