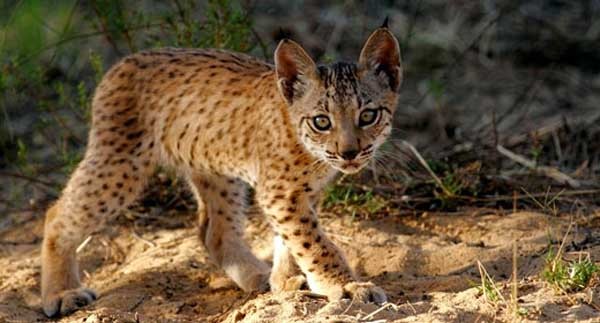 The Earth’s Most Endangered Cat

The Iberian Lynx (Lynx pardinus) is earth’s most endangered cat. Listed as Critically Endangered on the International Union for Conservation of Nature’s (IUCN) Red List of Threatened Species and with less than 300 individuals estimated in the wild, this small wild cat is in need of protection.  A cat species has not gone extinct since the saber-toothed tiger 10,000 years ago.

Historically, the Iberian lynx inhabited all of Spain and Portugal, but today only two breeding populations remain, in Coto de Doñona National Park and in Sierra de Andújar, Jaén, both in the south-western part of Spain.

Solitary creatures, the lynx roams a territory ranging from 4-30 kilometers depending on food availability and finding a mate.  Female lynx give birth to 2-3 cubs in a litter and the cubs remain dependent on her until 7-8months of age.  The cubs remain in their mother’s territory until 1-2 years of age.

Threats to the Iberian Lynx

Habitat fragmentation due to the development of dams and roads, the conversion of land to golf courses and increased agriculture are all threats to this lynx.  In addition the cat is the victim of accidental deaths in traps for other animals, killed by automobiles, and hunting.

The Iberian Lynx is especially vulnerable due to its dependence on only one prey species. The rabbit accounts for 80-100% of the cats’ diet. There has been a drastic decline in rabbit populations caused by habitat changes but also due to myxomatosis (a disease caused by the myxoma virus affecting rabbits)  since the 1950s and Rabbit Haemorrhagic Disease (RHD) since the 1980s. Over-hunting of rabbits and other human activities have also contributed to the decrease in the rabbit population. 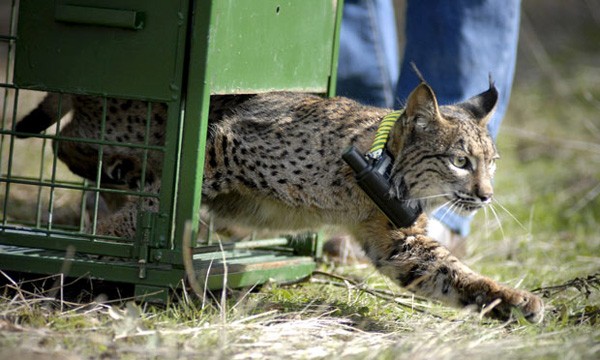 An Iberian lynx born in captivity is released into the wild in Spain. Photograph Agencia EFE/Rex Features

Iberian Lynx Cubs Born in the Wild Bring Hope for the Species.

At least two lynx cubs were spotted the week of April 27 by monitors who have been tracking the progress of a female lynx named Kodiak, who was released into the wild two years ago. Conservationists cheered the birth of the two cubs as a breakthrough in their efforts to save the species.  The births are thought to be the first in the wild for decades outside Andalusia where projects to save the lynx  began 12 years ago when the cat population fell to less than 100 in the wild.

Today there are thought to be about 300 individuals, a significant improvement from the previous estimate but still too few to be viable.  The fact that at least one pair has bred in western Spain, suggest that the cat may now be re-establishing across a wider area.

You can help preserve lynx habitat by buying wine with cork stoppers.  The Iberian lynx needs a habitat of part cork oak woodlands and part open scrubland to survive.  Cork harvesting is a tradition and sustainable. The outer layer of bark is peeled off, leaving the tree standing and able to grow back the bark for the next harvest. When you buy real corks, you are helping maintain cork oak trees and indirectly, the habitats for the Iberian lynx.  Cheers!

If you want to learn a bit more about the efforts to save the Iberian lynx, Fauna & Flora International and  the League for the Protection of Nature (LPN) explain how they are protecting habitat for the critically endangered Iberian lynx in this short video.