My mom and I had the privilege of talking tiger with Jackson Galaxy, the Cat Behaviorist and the Host of the Animal Planet series, My Cat From Hell. Jackson’s love for cats goes back to his childhood days when he was enamored of the big cats. Who doesn’t admire the strength and stealth of the tiger as well as the independence yet 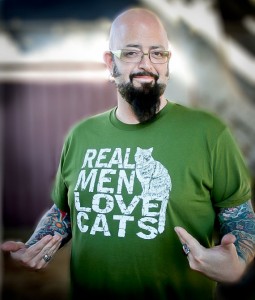 connection to the pride of the lion?  His love for the feline family stayed with him into adulthood and we agreed, that in our opinions, the wildness inside each and every cat is the reason for the fascination, admiration and attraction by humans towards the domestic felines that share their lives.

Those that have feline family members sharing their home know that the feline-human bond is quite similar to the human-human bond, because the relationship is a connectedness that is based on love, respect, and compromise.  Cats are intelligent and willful beings that refuse to be ruled. To successfully change what one thinks is a cat’s undesirable behavior, the human must first understand that a cat is just doing what a cat does, and that the compromise will need to come from the human.

Jackson has learned from his 16 years in the cat psychology realm that in order to succeed in mending the relationships between cat parents and what is deemed a problem cat might be simple changes that cater to the cat’s need to be “wild”.  The very thing that attracts humans to the cat, their wildness, is often what is also  interpreted as a problem. Cats are hard-wired to hunt. They can’t control this instinct.  Playful pouncing and stalking as a kitten is the preparation for survival as an adult. Cats that are  part of a human family don’t need to hunt for food, but they still need to release energy and express themselves by activities that mimic the hunt.

Without what Jackson calls Play Therapy, your cat may strike fiercely (pounce) on your ankle as you pass by  and then retreat into the bush (under the bed). Remember that cats prefer a vantage-point from which they can see yet not be seen. Think of a leopard camouflaged in a tree.  A cat will also stalk silently, watching, waiting until attacking the unsuspecting prey. Think of a tiger, nearly invisible, slinking through the tall grass.  These instincts are within all cats and  this energy needs to be released. Jackson reminds us, that to a cat, play and prey are the same thing!   Just like humans need to let off steam, so does your cat.  If the cat is not able to fully express her wild side,  she will feel stressed , and that may be why  the bad behavior issues arise.

This stress can manifest itself in a variety of ways:  the ankle attacks, aggressive behavior towards another cat in the home, scratching the furniture, litterbox issues and the middle of the night vocalizations that lead a human to despair and in many cases  decide to get rid of their cat.  Jackson’s mission is to keep cats out of shelters and off the streets for reasons that are preventable with  very small changes in the cat’s habitat.

The first step you can take to help your cat express her wild side is to establish a routine called  Play Therapy. Cats are creatures of habit and prefer structure.  Jackson suggests  one  play time about a half hour before bed as a way to help you get a good night’s sleep. Allowing your cat to release energy and satisfy their wild urges may prevent middle of the night toe chomping.   It is super important to keep to the Play Therapy schedule.  Over time this will become a routine and  your cat will look forward to that time of the day just as  you look forward to “clocking out” of work for the day.

You will need to experiment a bit to find the toy and type of play that appeals most to your cat.  I love a great game of hide and seek. I play this game with both of my parents.  I also play catch me if you can with my mom several times a day.  Jackson told my mom that my obsession with the office cactus was not my fault. I knew he was super smart. He said that it was up to my mom to find something equally compelling for me to occupy my time with to redirect my energy from the cactus.  My mom had already figured out that when I don’t get her attention, I head straight to

the cactus.  Jackson said this would be the perfect time of day to set up a Play Therapy session with me.  I am 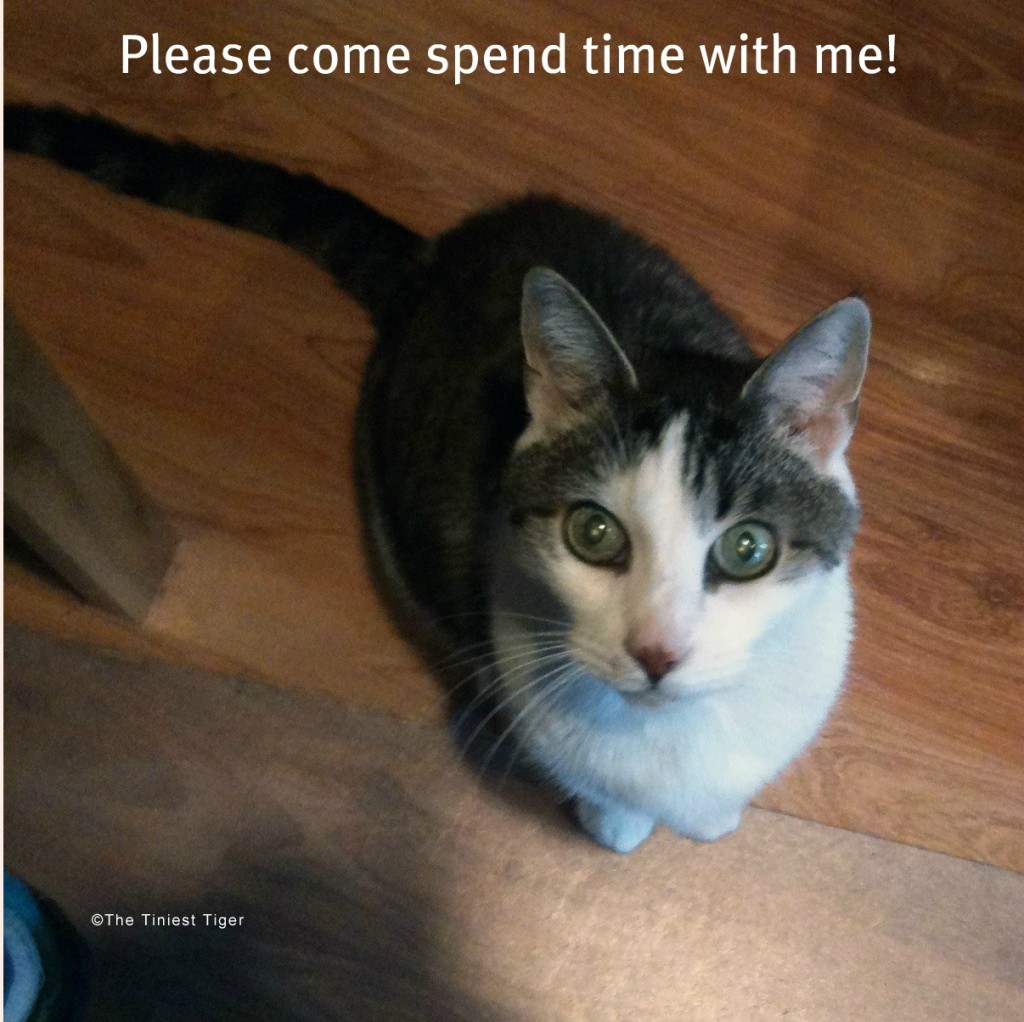 My Stop, Drop and Play Look

calling this late afternoon session our Stop, Drop and Play Time!   When I appear out of nowhere and am suddenly sitting beside my mom’s chair looking up with my big eyes, this is now her signal to stop what she is doing, drop everything for a moment and play with me.  It is super fun and good for both of us to have this Play Therapy time.

Everyone has work, family and obligations that create stress in their lives.  A cat also has stress in her life that is beyond her control. Remember a cat is a top predator, independent, intelligent being that likes to be in control of her surroundings.  Making a few adjustments to allow your cat to be an independent and happy feline with an outlet to express her wild side will lead to an even stronger bond between you.

Jackson’s  Animal Planet, My Cat From Hell  series season premier is Saturday, January 7, 2012 at 8 p.m. Eastern and Pacific. We hope that you will be watching too. This show is important for all cats because Jackson is giving a voice for the cats that are misunderstood.  The education and understanding of feline needs and behavior will lead to far fewer cats being turned in to shelters, abandoned in the streets, and/or ultimately being euthanized.  Jackson is breaking through and being heard. Let’s help spread the word. 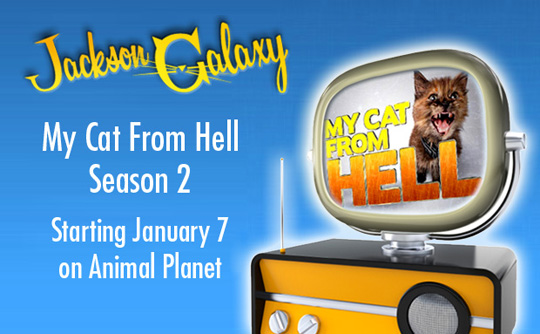 Previous Post: « Maasai Change Brings Hope for the African Lion
Next Post: Tigers on Top of the World »