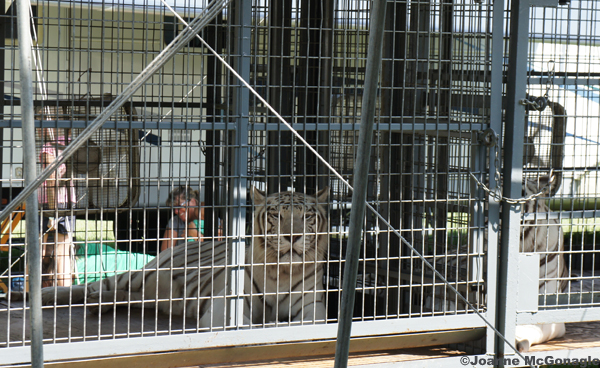 An overwhelming majority, 98% of the participants of an online survey assessing general knowledge of and attitudes towards tigers, did not think it was acceptable to keep a tiger as a pet or in a cage with a cement floor. Only 13% said they liked to see tigers perform at circuses or other arenas. 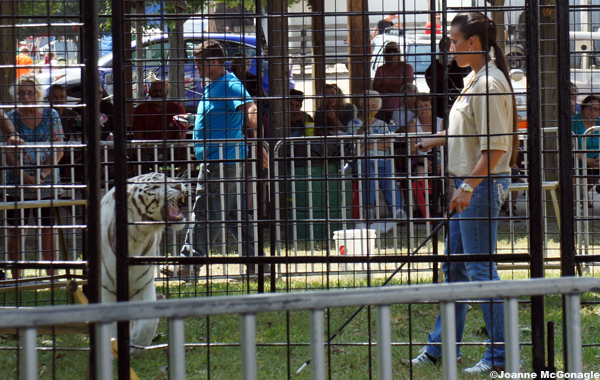 So I was surprised to learn Vicenta’s White Tigers were one of the attractions last week at the Perry County Fair in Ohio. We live near the fairgrounds and after about a dozen phone calls and text messages telling me tigers were performing at the local fair, I felt compelled to go see these tigers with my own eyes. 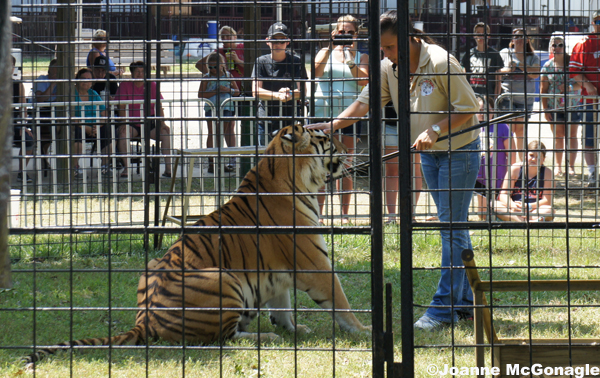 The temperature on my Jeep showed 97 degrees when I pulled into the fairgrounds.  I walked briskly over to the tiger attraction arriving just as the 3 pm show began.  Sure enough, to the beat of very loud music, white tigers and a couple orange tigers were in a small enclosure alongside a woman with a whip directing them to do tricks including imitating the moonwalk made famous by Michael Jackson.  The tigers looked less than thrilled.  Could have been the heat, it was sweltering, could also be because this type of life is not in the best interest of not only these tigers, but for the present and future conservation of tigers. 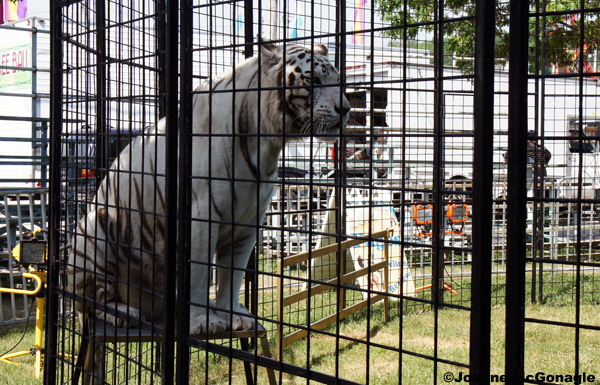 The Association of Zoos & Aquariums (AZA) Board-approved Policy on the Presentation of Animals maintains that animals should always be presented according to these core principles:

This type of tiger show violates all three of the AZA’s core principles.  Here’s why.

Animal and human health, safety, and welfare are never compromised.   Here is the sign placed on the low partial barrier around the temporary tiger enclosure. The sign does not say what not to do, in other words, what does agitate tigers? 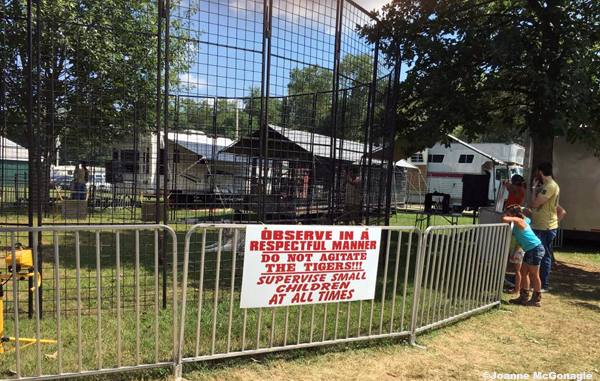 This barrier was all that stood between the people and the tigers that remained in the enclosure between  shows. The tigers were forced to perform at 3, 6 and 9 pm daily.  This outer barrier did NOT go completely around the enclosure. It would have been super easy to walk around and stick fingers, hands, and arms into the tiger enclosure.  You could also walk up to the cages holding the other tigers. 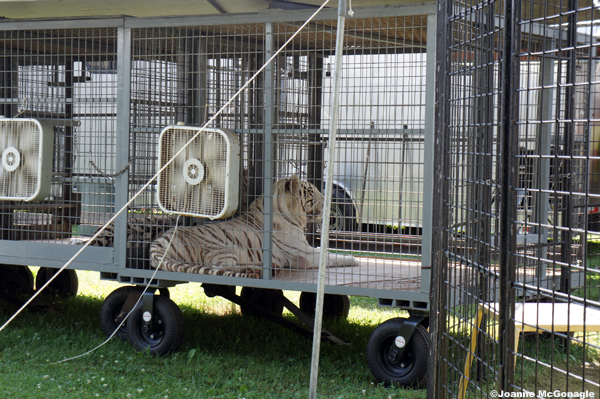 See how close I am? Had I wanted to, I could have easily gone to that cage and touched that tiger’s tail. 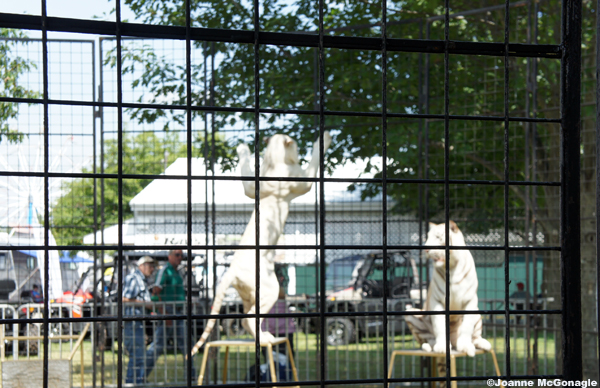 A woman was very close to the tiger enclosure. She was trying to get a photo. One of the white tigers became agitated and stretched up to climb over the fence. He was on his way before he was cracked with a whip to get back down. 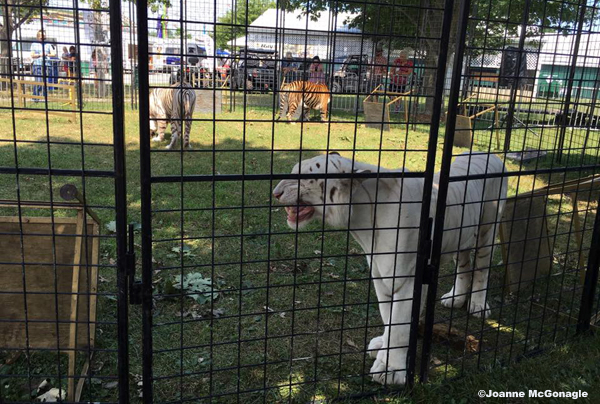 Education and a meaningful conservation messages are integral components of the presentation.

Vicenta Pages, who has trained large cats since she was 14 years old claims she has no fear of the huge animals. “The older ones, I know inside and out,” she told a local newspaper, “and they don’t pull too many surprises.”  Pages went on to tell the newspaper, I  still have to be somewhat careful, however, of the younger tigers, which can be unpredictable despite being raised in captivity, as all the tigers are. I just have to be more cautious,” she said.

Not only is there no meaningful conservation message, there is a negative message  perpetuating the myth that raising a tiger from a cub makes a tame tiger. It does not.  And inbreeding to create a white tiger is not helping any tiger population. In fact, white tigers hinder conservation efforts.

The individual animals involved are consistently maintained in a manner that meets their social, physical, behavioral, and nutritional needs. 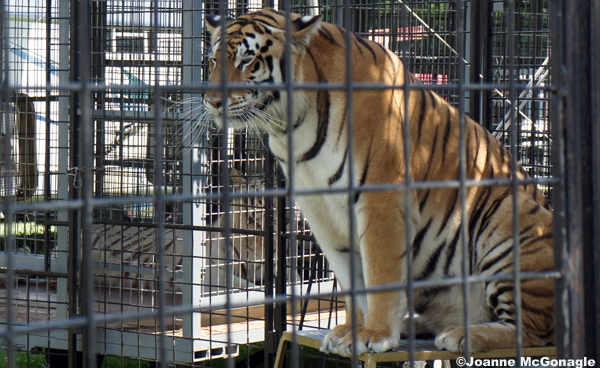 It was nearly 100 degrees, the tigers were panting, and visibly uncomfortable.  I saw no ice blocks, drinking water or pools provided to these cats while I was observing.   A man sprayed the tigers in the enclosure with a hose one time while I was present. 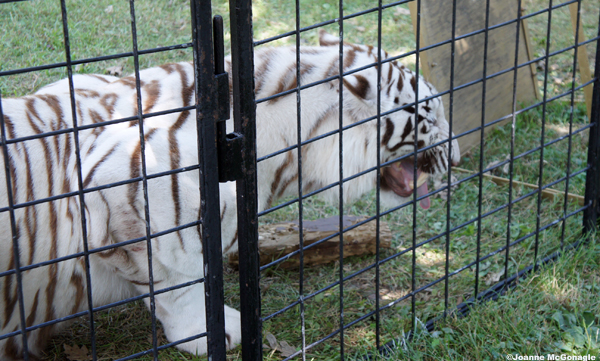 The cages the tigers spend the majority of their time in are small. The tigers can turn around and stand up but that is about the limit of their ability to move. These tigers are on the road most of the year from what I understand so they are spending a great deal of time in these tiny cages.

There was also very loud music blasting out during the performance. The speaker was close to the tigers in the enclosure.  This loud music had to hurt their ears.  I don’t have any knowledge of their diet or if their nutritional needs are met. I did see a few pieces of meat tossed into the enclosure.

Promoting white tigers perpetuates the demand. Most white tigers are Amur-Bengal hybrids that have been inbred to achieve the white coat.  Documented abnormalities and deformities associated with selective breeding  includes:

This Type of Entertainment is Archaic 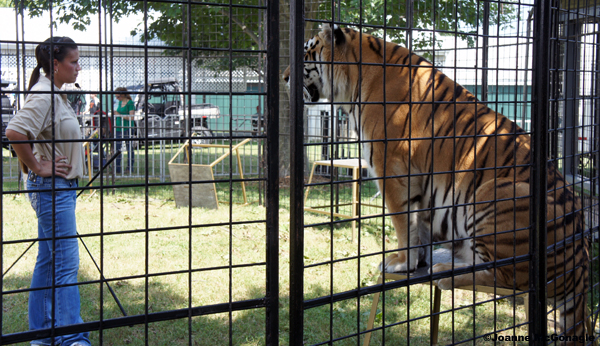 This type of entertainment is archaic.  Forcing tigers  to perform unnatural tricks by threatening them with the crack of a whip is wrong.  After the 3 pm show, I hung around a bit to observe the tigers and I had the good fortune to have a conversation with a clever 5 year old boy and his 3 year old sister.  Their father was keeping a close watch on both of the children when I heard the boy ask his father why the woman was in the cage with the tigers.  The father said she is their owner.  The boy responded, they could attack her to which the father responded, I suppose they could but that is why she has the whips.  The young boy looked on the verge of tears when he said if he were the tigers, he would attack her because it isn’t right  to be kept in the cage to do tricks and it was way too hot for them. The father was at a loss for words.  He told me his kids love big cats. They watch them on tv and when they go to the zoo, they want to run to their habitats.

Three tigers walked over and sat down looking at us through the fence.  The little boy said to me, “Hey, I think they like you!” I smiled and said, “Maybe they want us to help them. What do you think?”  He said, ” Yes, I think they want out of those cages.”

His sister said “Those big kitties act just like our little kitty.”  I laughed and said, they really do have a lot of the same behavior don’t they?  And then she said, “But we don’t whip our kitty.”

And my heart broke.

Not only do the tigers deserve better. So do our children.

Association of Zoos & Aquariums White Paper.  Animal Welfare Committee: Taskforce on Animal Breeding Practices ( Approved by the AZA Board of Directors June 2011) Welfare and Conservation Implications of Intentional Breeding for the Expression of Rare Recessive Alleles