I had the honor of watching  The Last Lions, An Incredible True Story of Survival from National Geographic Entertainment.  National Geographic was so nice, they sent me a copy to watch here in my habitat.  The film was made by  Dereck and Beverly Joubert, award-winning filmmakers from Botswana, Africa.  The Jouberts  have been National Geographic explorers-in-residence for over four years.  Their body of work has produced five Emmy’s, a Peabody, the World Ecology Award, and induction into the American Academy of Achievement.  Filmmaking  is their way of bringing the message of conservation to  viewers, and I think they delivered with The Last Lions.

From the opening scene of the film you will be swept away by the beauty of Africa as the film takes you on a visual journey into some of the last remaining  wild areas for lions. The cinematography is breathtaking and mesmerizing to watch, as you listen to the story being narrated  by Jeremy Irons.

The  tale unfolds  in the wetlands of Botswana’s Okavango Delta where a lone lioness  and her cubs must flee a raging fire and escape from an invading rival lion pride driven south by human encroachment from their home territory.  Ma di Tau (“Mother of Lions”) must battle alone for her survival and for her cubs.  The lioness is forced to swim across a river full of crocodile to the remote Duba Island.

Life is difficult for all lions but to be alone, to  have to make a decision of whether to hunt  or to stay and protect  her cubs is a constant struggle. Not only does Ma di Tau have to worry about the  rival pride’s female leader, Silver Eye, she must worry about the  fierce herd of buffalo that have also sought refuge on Duba Island.

When you think of Africa, you more than likely think of lions.  You might picture wild lions roaming freely and abundantly across vast expanses of the continent.  But unfortunately that is not the reality for lions today. As little as 50 years ago,  more than 450,000 lions  ruled their land but today there are an estimated  20,000 individuals.  There are only an estimated 3500-5000 male lions remaining and the United States is still allowing the import of 550 “Trophies a year”. To add insult to injury, every time a male lion is killed for “sport”, between 12 and 20 lions are killed, because the new male that enters to take over the territory  will kill all the cubs the dead male has sired.  The females often fight to the death protecting their cubs.

The film is  heart breaking and  you will feel physically spent watching the struggle up close but there is a turning point where the power shifts into Ma di Tau’s favor at least for a moment in time.  The film will more than likely leave you a bit haunted, and that is what a great documentary should do if you ask me.  There is an important message  that needs to be heard by all  and that message is our world cannot sustain the level of abuse  being placed upon it by the most invasive of all species, human beings.  As humans crowd out all other living creatures, what will happen to our world?

The film asks, “Are Ma di Tau and her cub  to be among the last lions? Or will humans be touched when they see how tough, courageous, and heart-rending their lives in the wild are and be moved to make a difference?” 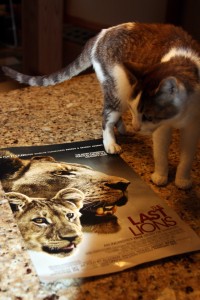 Friends, I so loved this movie and its message that I want to give one lucky reader the opportunity to win a copy of The Last Lions  Official Companion to the Motion Picture Book! The book is filled with the amazing photography of Beverly Joubert and is written by Dereck Joubert.  All you have to do to be entered to win a copy of the book is leave a comment below this post, telling me why lions are important to you, by March 9, 2011. Lions are so woven into our lives, it is nearly impossible to imagine our world without them isn’t it? 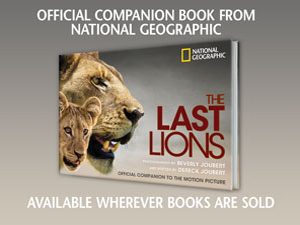 Leave a comment below for your chance to win a copy.

I want to ask you to share this with all of your Friends too so that we can help spread the word about this important film and the urgent message to help save the remaining lions.  Please visit Cause an Uproar to learn about the Big Cats Initiative and how you can help.

Let’s bring March in like a Lion for the lions!