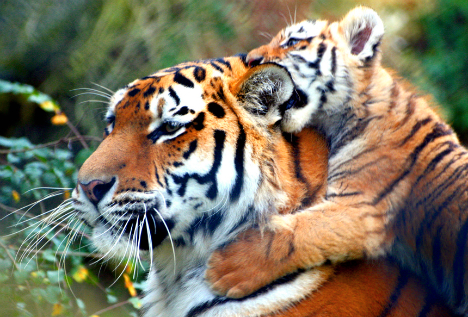 This weekend many people will celebrate Father’s Day so  I wanted to share  this story with you about a tiger from Ranthambore National Park in Northern India.  A few months ago a male tiger was observed keeping watch over two six month old cubs.  According to forest officials,  the cubs’ mother died early last year from septicemia and the tiny cubs were missing until later observed with an adult male tiger that experts think might be the cubs’ father.

The male tiger’s behavior is unusual because male tigers have not been observed protecting their cubs. Traditionally, the mother tiger cares for the cubs until they are at least two years old.  This role reversal caught forest officials and wildlife expert Rajpal Singh by surprise.  Singh said that tigers have been sighted in Ranthambore with their complete families, but that this was the first time only a male tiger has been seen looking after small cubs.

Even more interesting, this fatherly tiger doesn’t just keep an eye on his little ones, he  lets them eat the food park employees leave for the cubs and has been observed sharing his kill with the young tigers.  Dad  has  restricted his movements within a smaller territory as well, and experts think this might be out of consideration for the cubs to save them from becoming too tired.

This tiger, known as T25, is thought to be the exception to the rule when it comes to raising cubs.  Tigresses on the other hand  are known to be fiercely protective over their cubs at times even guarding them from the father. Tiger cubs are born blind and completely dependent on their mother. Their eyes open within six to twelve days but they don’t have full vision for another couple of weeks. The cubs begin to hunt with their mother when they are about eight to ten months old. It is traditionally the mother who teaches the cubs how to stalk prey and protect themselves.

A forest official said that one of the cubs follows the adult male at a distance and one stays close by.  This surprising behavior from  T25 has led them to believe he might be the cubs’  father but this is not for certain.

One thing is for certain, these two cubs have been able to survive because T25  took them into his care.

Happy Father’s Day to all fathers of every species everywhere.

Previous Post: « Mission: Small Business The Tiniest Tiger Fashion with a Passion.
Next Post: Please Nominate Gracey for a 2012 Pettie »