Vote for The Tiniest Tiger’s Snow Adventure in The Friskies 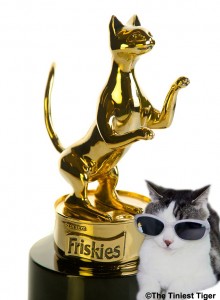 Voting is open now  and our video The Tiniest Tiger’s Snow Adventure is a Semi-Finalist!  From the thousands of cat videos entered this year, Friskies and the contest judges selected 20 Semi-Finalists to compete for a spot as one of 12 Finalists. The top four Category winners and one Fan Favorite winner will be awarded $25,000 in total cash prizes and gold-plated Catuette trophies at “The Friskies” Award Show October 15, 2013. The show will be hosted by comedian and cat owner Michael Ian Black, and broadcast online at www.TheFriskies.com.

“In America, the vote is always in the hands of the people,” said comedian, cat owner and “The Friskies” host Michael Ian Black. “Take advantage of that right and vote for your favorite Internet cat videos at www.TheFriskies.com! It’s time to give back to those cats and their owners who create the videos that get you through work, public transportation and family parties. It just may be the most important thing you do. And you should do it every day.”

Voting is open now through noon ET September 16, 2013.  You can vote once a day per entry, per person, per email address. The 20 Semi-Finalists include five entries in each of four categories: Catventure, Cat Comedy, Rescue Cat, and Pursuit of Food or Treat. Friskies asks voters to consider the judging criteria when voting:

“The Semi-Finalists’ videos showcase amazing variety, and they highlight the personalities of cats and their owners in artistic ways that are fun to watch over and over,” said Shawn Brain, Friskies assistant brand manager. “Every vote counts and the public will be 100 percent responsible for choosing the 12 Finalists to travel to New York City for “The Friskies” Award Show for the opportunity to win each $5,000 category prize and the coveted Fan Favorite. Voters can check back daily to see which videos are in the lead, and watch and share their favorites at TheFriskies.com.”

One Vote = One Can of Cat Food to Cats in Need

While votes help choose the winners; views, votes and shares help Friskies’ 20 cat charity partners work toward their goal of earning 250,000 cans of Friskies. As part of the “Share to Care” program, Friskies Facebook fans can help boost the total donation beyond 250,000 cans during the voting period. For every video vote  Friskies will donate one additional can of cat food to the cat charity partners, up to 25,000 cans. So far the community has helped the 20 charities earn more than 40,000 additional cans of Friskies!

The Award Show will be broadcast live from New York City, and hosted by comedian and cat owner Michael Ian Black. The show will feature surprises and special guests for cat lovers. Attendees and presenters will include the Friskies judges, Will Braden, creator of the Henri, le Chat Noir; Mick Szydlowski, “The Friskies” 2012 Grand Prize Winner for “Oskar’s First Toys;” and Abbie Moore, executive director of Adopt-A-Pet.com.

Thank you for your Support!

Will you please take a moment to vote for Gracey’s video  The Tiniest Tiger’s Snow Adventure?