Gracey never liked wearing a costume.  She especially didn’t like wearing anything that restricted her ear movement.  Annie takes after Gracey when it come to costumes.  If your cat is like Gracey and Annie, then Kat Sherbo from PetCareRx has a solution to the Halloween costume for cats.

Cats Not Up for Halloween Costumes? Make them a Part of Yours! 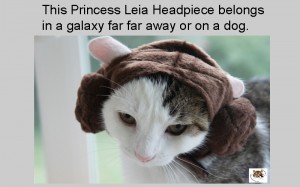 If your cats are anything like mine, there will be no costume wearing on Halloween. You might get away with a pumpkin-print collar, but chances are they’ll ditch that too, somehow sensing that you really want them to wear it and taking that as ample evidence that they should do no such thing.

Growing up, I loved Halloween more than any other holiday. My mom was a great seamstress, and over years of Halloween we collected and made more costume-type stuff than could really fit in our closets.

Despite our costume prowess, we could never get our cats in on the action. Not by decking them out, anyway. Crafty kids that we were, we found ways to incorporate our beloved kitties into the holiday without them even knowing it.

Here are a few fun ways your cat can be the perfect accompaniment to your Halloween costume without wearing a stitch.

You might feel like you do this every day, but mankind’s mystical history with felines goes back to ancient times. Birman cats were the companions of monks in Birma (modern-day Myanmar) and Siamese were believed to receive the souls of royal family members who had passed on in Siam (modern-day Thailand). Perhaps more famously, ancient Egyptians worshipped several cat-shaped gods and goddesses, and believed that having a black cat would bring good fortune.

You could opt for a costume fitting one of these ancient eras, or simply dress as a modern cat-worshiper – covered in cat hair and bearing kitty treats.

2. Embrace Your Inner Witch (or Warlock)

Often depicted as the familiars of witches, black cats are an especially common Halloween theme. I happen to think cats of any color can be just as magical. If you pick this costume, you’re in luck – witchy accessories are basically everywhere in the weeks leading up to Halloween. Grab a tall black hat, a broom, let your kitty twine around your ankles like always, and you’re set.

Many cats came to the US as stowaways or vermin-catchers on ships, so you could dress as an explorer, pilgrim, or humble sailor and have your cat be your trusty skipper. Plus, 18th century pirates believed that a cat walking toward them was good luck, but a cat who started toward them and then walked away was bad luck. You could test your own luck in a pirate costume and just see how the night goes.

Kat Sherbo is an editor and blogger at PetCareRx and The Wet Nose Press. She’s a Colorado native eager for a big enough NYC apartment so she can get a dog, or a cat, or both, and has picked out names for these as-yet unadopted pets: Burrito and Puzzles.