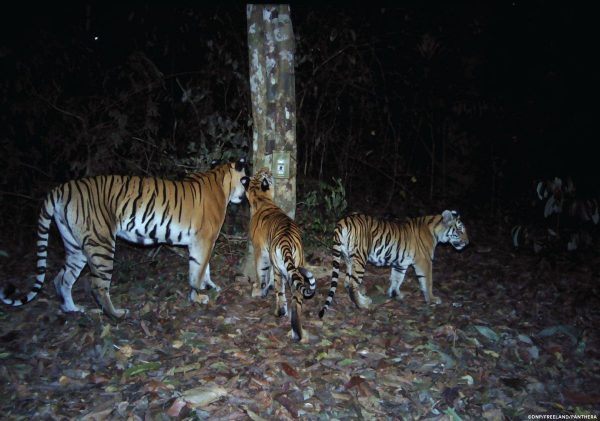 Camera traps placed by Panthera in the forests of eastern Thailand captured something simply amazing.  Images of wild tigers, four mothers and six cubs, living deep in the Thai jungle.  In what tiger experts are calling a miracle, because there had been no evidence of  the Indochinese tiger in eastern Thailand  for more than 15 years. This scientific survey confirmed the presence of the world’s second breeding population of Indochinese tigers and the first photographic evidence of tiger cubs in eastern Thailand. Conducted in partnership by Freeland and Panthera with support from the government of Thailand, the camera trap survey carried out in the forest complex in Eastern Thailand indicated a density of 0.63 tigers per 100km2.

While these data suggest the region supports an exceptionally modest tiger density, on par with some of the most threatened tiger habitats in the world, the results conversely demonstrate the tigers’ remarkable resilience given wildlife poaching and illegal rosewood logging present in the area.

Evidence of a breeding population of tigers represents a key milestone for this UNESCO World Heritage Site. These and other results have given hope that efforts to train and equip protected area rangers are paying off. The Director of the National Parks Division of the DNP, Dr. Songtam Suksawang, said, “The stepping up of anti-poaching patrols and law enforcement efforts in this area have played a pivotal role in conserving the tiger population by ensuring a safe environment for them to breed. However, we must remain vigilant and continue these efforts, because well-armed poachers still pose a major threat.”

The tigers are only believed to have survived in the area due to an early recognition of the significance of this Eastern Thailand forest complex for the species’ future in Thailand, and a strict, long-term investment in well-implemented, counter-poaching law enforcement efforts from the national government. These efforts have been supported by conservation organizations like Freeland and Panthera.

Freeland’s Chairman of the Board, Kraisak Choonhavan, said, “The existence of tigers here was often doubted, but these recent surveys are proving its importance not only nationally but regionally and internationally as well. It’s crucial to continue the great progress made by the Thai government to bolster protection for tigers at the frontlines.”

He added, “As long as the illegal trade in tigers continues, they will need protection. Counter-wildlife trafficking starts at the source. Here is a modern project that has helped to bring rangers and police together that should be replicated across all other tiger range countries, so these populations can recover.”

Panthera Senior Tiger Program Director, Dr. John Goodrich, explained, “The extraordinary rebound of eastern Thailand’s tigers is nothing short of miraculous, and a true testament to the DNP’s commitment to saving its most precious natural resource.”

Goodrich continued, “Even more invigorating, Thailand’s World Heritage Forest Complex is home to prime forested habitat that, with significant conservation resources, could support eight times as many tigers as it does now. With continued infiltration of rigorous anti-poaching protection, there is no doubt that this population can be fully recovered, burgeoning into a tiger stronghold and serving as a source of life and diversity for depleted tiger populations in Cambodia, Lao PDR and throughout the species’ range.”

Today, just 221 Indochinese tigers are estimated to remain in two Asian countries: Thailand and Myanmar. Thailand’s Huai Kha Khaeng Wildlife Sanctuary, the site where Panthera’s CEO Dr. Alan Rabinowitz worked on the big cats in the 1980’s, is home to the largest (35-38 individuals) and only other known breeding population of Indochinese tigers.

Thanks to your support of Triple T Studios, we are able to support  Panthera’s Tigers Forever Program and our donations have enabled the  purchase of several camera traps.