It snowed overnight Monday. Not much, just a couple of inches. Enough to cover the ground and the golden blanket of ginkgo leaves that danced to the ground over the weekend.  I missed the leaves falling this year and that was fine with me.  You weren’t here to watch with us and that was one of our favorite things to do  in November. Your dad said the leaves fell so quickly that even though he was home he missed them too.  I think that might have been on purpose. 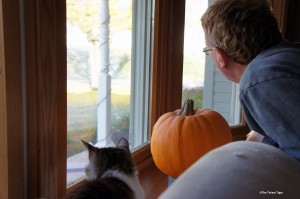 Paul and Gracey waiting for the ginkgo leaves to dance last year.

I went to Washington D.C. for the Alley Cat Allies conference.  I learned a lot about community cats and what we can all do to help them coexist with humans.  When Becky Robinson, the founder of Alley Cat Allies, asked me how I came to be a cat advocate, I told her your story of  how we found you after being dumped at the dog pound and that I bottle fed you and hoped you would grow strong and thrive. I told her your story and she smiled and said, how amazing it is that many people become cat advocates because of  rescuing one special kitten.

Later I thought about how you fit in the palm of my hand and I used to put you under my coat, zip it up and you would ride there, snug and warm.  I think of you every day. Six months since you’ve been gone.  Six months without you.

Your video The Tiniest Tiger’s Snow Adventure won the CatVenture category at The Friskies. This was an amazing surprise.   After I returned to my seat from accepting the award your video was shown to the audience.  Your dad and I weren’t expecting to be hit so hard with sadness seeing you up on that big screen.  I had watched that video many times at home, but during the video when you climb back into your heated thinking circle and the words Home Sweet Home were displayed, I felt a tear roll down my cheek.  I looked at your dad and he just shook his head no, like don’t look at me because I understand and feel the same way.

I am able to go out and feed the birds by myself now.  And the last time Annie ran to the sun room to watch me.  I walked up and put my hand on the glass and she rubbed up against the window where my hand was and this made me smile.  She is a sweet girl too with a bit of mischief, well maybe a bit more mischief than your dad would like because she likes to leap up onto the ledge around the stairs to the man cave and you know how much he worries.  Eddie is a good boy.  He doesn’t terrorize your dad like Annie does and Eddie likes to nap in your heated thinking circle.

The power company came to trim all the tree branches along the power lines.  I know this needs to be done to help prevent power outages when snow and ice build up on the branches, but I hate it just the same.  I hoped they wouldn’t cut too much down.  When they were finished, one of the workers came and told me  they took the liberty to trim back the forsythia bush in the back yard.  I asked him why as this bush was no where near the power lines.  He said he thought he was doing us a favor.  I forced a smile and gathered the courage to go and look.   There is a big gaping hole in the yard where the rabbits lived.  I don’t know where they went. We haven’t seen them since.

And after all that noise, trimming and sawing there were no birds to be seen or heard.  Not even Bossy Backyard Blue Jay.  Just silence.  After two weeks, I told your dad that the birds were gone and weren’t coming back.  They didn’t even come back for the peanuts.  He told me not to worry and that he was sure they would be back soon. And he said it with such conviction that I thought maybe he was right. Ten minutes later, he called me to the sun room.  I asked him why and he said just come and see.  And there he was, Bossy Backyard Blue Jay back for a visit.  I hope he stays home now.

Last week, I woke up in the morning and I thought about how much I miss you.  I stayed in bed a little longer feeling sorry for myself when Annie came up and placed her paw on my hand like you used to do.  I looked at her and said, “Thank  you, Annie.” And then she put her chin on her paw and snuggled beside me.  I like to think you whispered in her ear to let me know you are fine.

We are doing better.  Adjusting.  I hope you and your Grandpa watched the ginkgo leaves dance together.

In memory of my dad and Gracey.